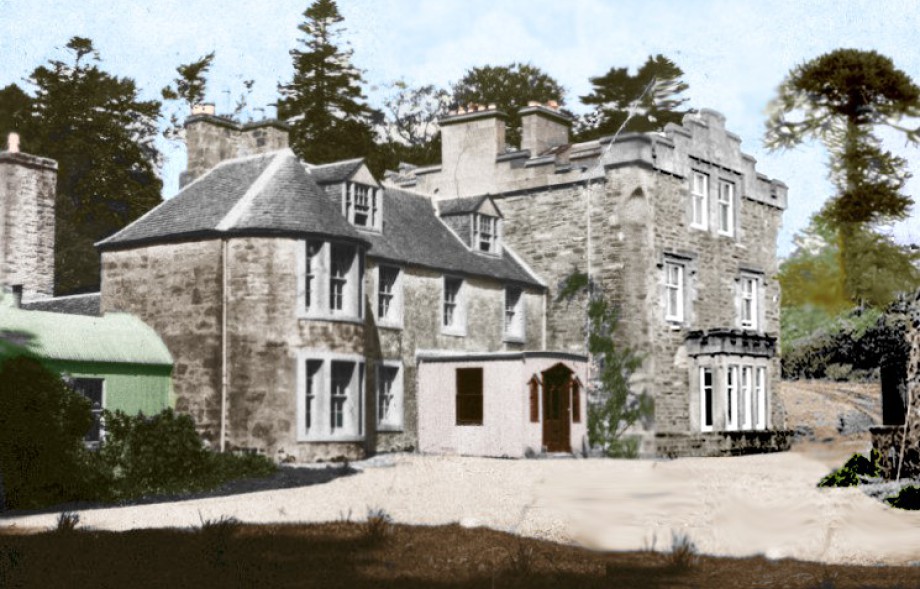 The private courses are:

“On Saturday, 20th ult, a party of ladies and gentlemen from Tobermory, specially invited by Mr Lamond Ewart, the Gardens, Glengorm, with the concurrence of Mr Morgan, the proprietor, played a friendly match with the golfers on the estate. The Tobermory party arrived at Glengorm at Noon, and after refreshments, proceeded to the golf course. The day was ideal, and the bracing breeze from the Atlantic delightful. The Glengorm course, laid out by an expert, extends to 1820 yards, the distances between successive holes being as follows :- 155, 218, 240, 270, 200, 151, 280, 138, 168 yards. There are plenty of hazards, outcropping rocks, Dykes, Rushes, and small glens, with an occasional marsh lying in wait for the unwary golfer. None of the greens are visible from the teeing ground. The visitors needed much guidance from the home club, who were most assiduous in directing the former, but still won by 18 holes to 4.  After a smart walk homewards, the party were again entertained by Mr and Miss Ewart. The visitors left shortly after dusk. The kindness experienced by the Tobermory golfers will long be remembered.”  (Oban Times, 4.12.1909) 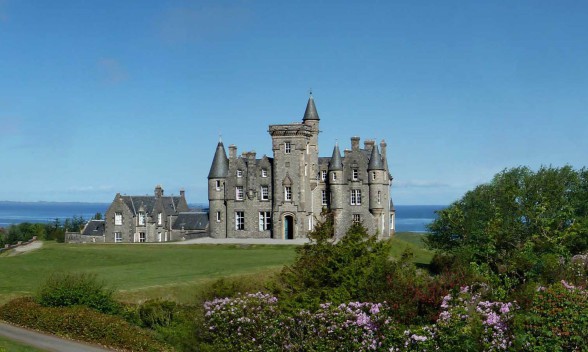 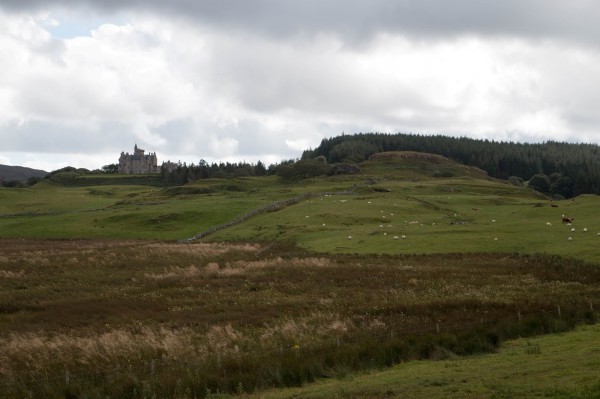 Location of the old course with castle in the background.

Argylshire – Island of Mull, to be let for the season.

The castle is beautifully situated on the coast at the North end of the island, and is distant about 5 ½ miles from the town of Tobermory, where during the summer months, several steamers from the mainland call daily.

The accommodation consitsts of dining room, Drawing room, and Library room. There are about 25 family and servant’s dressing rooms. 3 W.C.s inside, 2 outside, also 4 Bathroom’s, ( 1 servant’s ) And the usual kitchen and domestic offices suitable for a large establishment.

There are excellent stables, coachhouse, men’s rooms, Harnessroom and Kennel for dogs.

The gardens are one of the features of the place, and there are a well stocked fruit, vegetable, and flower garden, and also 2 greenhouses.

The Shootings extends to nearly 6000 acres, consisting mainly of Moorland, and affording a fair amount of the usual Highland Game,with occasional Red Deer.

The Fishing on the estate is much above the average, and includes rights of fishings on 5 good lochs – Viz ;- Loch Frisa, Loch -an- torr, upper, middle, and lower Mishnish Lochs, The Mishnish Burn, which bounds the estate, and Loch-an-Torr, afford good sea trout fishing.

The is also a nine-hole golf course.

Arrangements might be made to let the winter shootings, including Pheasants, 800 killed last year.

Desirable Estate in the island of Mull

In the united parish of Kilninian and Kilmore

This beautiful and compact estate is situated on the North-West coast of the island, and from three to ten miles from the town of Tobermory. Its extent is 13,600 acres, whereof about 2000 acres are arable, 1000 green pasture, 9000 hill pasture, 450 acres wood, and the remainder waste ground, roads, lochs, etc.

The mansion house is a fine building, in the old scotch baronial style. It contains every accommodation for a large family, and has hot and cold water, and gas throughout.

The grounds are tastefully laid out ; and there is a large and productive walled garden, with Peach House and Vinery. The court of offices is new and commodious.

The views from the mansion house and grounds are magnificent.

The FARM HOUSES and OFFICES are substantial and suitable, and in excellent order, most of them having been erected within the last few years.

The grazing is excellent, and unusually well-sheltered, and the arable land is productive.

The SHOOTINGS Include RED DEER, GROUSE, BLACKGAME, HARES, patriges, pheasants and rabbits. Large quantities of Woodcock and wildfowl frequent the ground in winter. The shooting is not excelled by any on the island.

There is SALMON NET FISHING on the coast, and the fish ascend several streams on the property. The trout fishing, river and loch, is very superior, and there are excellent fishing banks in the sea within a short distance from the house.

The present rental of the estate including the proportion in the proprietor’s hands, but putting no value on the mansion house, Shootings, &c, is about £2300. The public and parish burdens average about ten per cent of the rental.

The estate holds partly of the crown, and partly of subjects superior, for payement of a trifling feu duty, and the teinds are valued and exhausted.

There is a large extent of valuable wood on the property, and it is intersected by good roads.

Loch Chuin affords excellent anchorage for yachts, and there is a capital and safe harbour near the house where vessels can load and unload.

A more desirable property, either as a residence or investment, is rarely in the market. There is steam communications between Tobermory and the South daily in summer, and several times a week in winter. 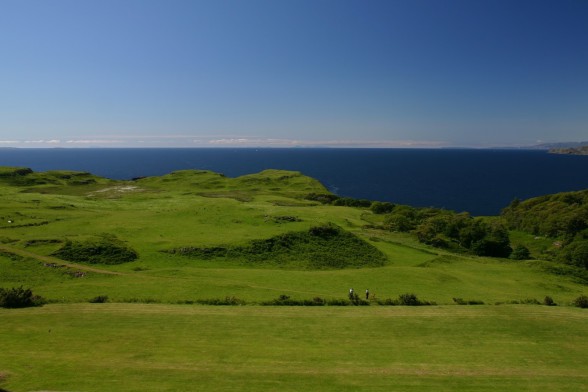 The golf course, as it is today, This was a cracker !!

To be sold by private bargain

Extending to about 5780 acres, of which about 680 acres are arable and good pasture, 450 acres plantation and polices, and 4750 acres, Moor, Rough Grazing, Land, Lochs, and foreshores, including roads, and carrying a stock of about 1450 blackfaced sheep, and about 100 highland cattle.

Change of name of Union Castle

The Union Castle mail steamship company give notice, in consequence of the unsuitability of the present names of their steamers, The German and The Galecian, under existing circumstances, these vessels will in future be named respectively the Glengorm Castle and the Glenart Castle.

But for the prompt assistance rendered by estate workers and others, two alarming heath fires yesterday, in the vicinity of Tobermory, would have caused irreparable damage.

The first fire occurred on the Glengorm estate, starting at Loch House, and rapidly spreading over Glengorm hill, threatening to include a plantation and a dwelling-house on its track. After hours of incessant fighting the flames were subdued before serious damage was done.

The more alarming fire occurred Coanclhu Hill, at the head of loch Frisa. The glare of the fire on the sky was distinctly seen at Tobermory, five miles away. The burning covered fully four square miles of an area, reaching the vicinity of Achnadrish Mansion House, where for a time it was thought the dwelling would be involved. The state workers and others fought the flames for hours, and were latterly assisted in the early hours of yesterday morning by a party returning from a ball at Ulva. While the fire has been checked it is still burning in isolated places. The dry condition of the heather and the strong South-Easterly wind prevailing make it difficult to subdue or confine such a fire after it has been started.

What a stunning Location for a golf course !!

Identity of Donor of New

Miss Margaret Lithgow, Glengorm Castle, Mull, is the donor of the new lifeboat for Tobermory, which is being built at Messrs Robertson’s yard, Sandbank. It is learned, Miss Lithgow is a sister of Sir James Lithgow, the shipbuilder. The new lifeboat is to cost several thousand pounds. When completed, it will be on view at the Empire Exhibition at Glasgow. Forty-six feet in length, it will be driven by two 40 h.p. motor engines, manned by a crew of twelve, and will carry 95 passengers.

The new Tobermory lifeboat, Sir Arthur Rose, took up her station yesterday. She relieved the J. and W. which was placed there temporarily four weeks ago.

The Sir Arthur Rose, it will be remembered, was gifted by the late Miss Lithgow, of Glengorm, Mull, and was displayed at the Empire Exhibition in Glasgow, under the command of Coxswain Alexander Noble.

She arrived from Sandbank via the Crinan canal. At Ardrishaig she was open for inspection, and was visited by fully 300 people.

After the ceremony of handing over the Sir Arthur Rose, the J. and W. left for Sandbank. 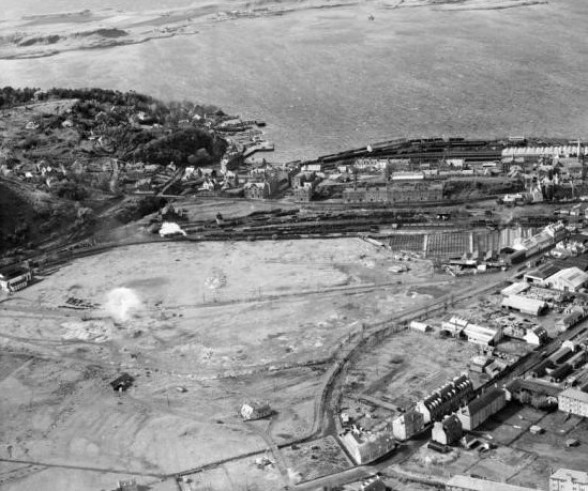 The site of the old Glenmore golf course, Now occupied by Tesco's etc

Glenmore, Oban. “Opening of a New Golf Course.-  On Saturday last a new and private golf course of 9 holes in Glenmore, inaugurated by Mr J.A. Beith of Altnacraig, was opened by Mr Alexander Shairp, architect, Oban.  Among a number of gentlemen present who played over the course were the following members of the Oban Golf Club;- Messrs John MacColl, piper, scored 43;  Duncan MacKenzie, sheriff clerk, 54; Thos. Boyd, bookseller, 51;  Duncan MacIntyre, Commercial Hotel, 48; A.Black, solicitor, 53; A.Shairp, 47.  the course has been laid off by Andrew Honeyman, professional, who holds the record, having made the round in 38.  the new course - Oban’s second - is situated in the glen behind the Pulpit Hill, and the surrounding views are magnificent.  After the 0pening round Mr Shairp entertained the players.” (Oban Times 22.6.1895) 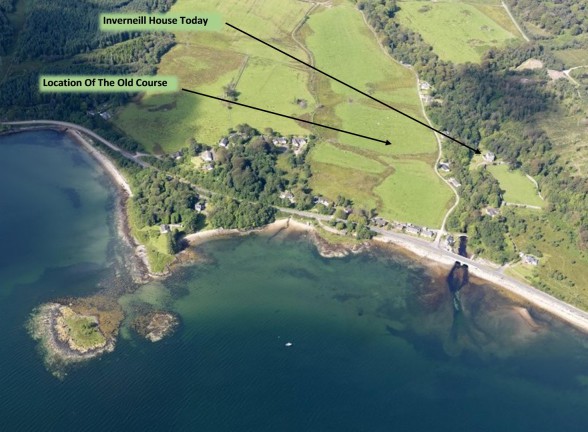 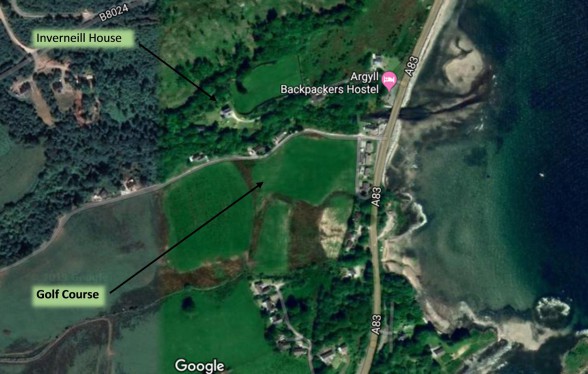 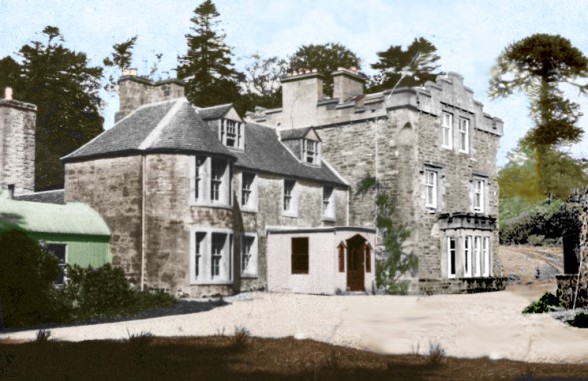 Inverneill, by Lochgilphead. A nine-hole course in the grounds of Inverneill House, 4 miles south of Lochgilphead., first mentioned 1893. “On Saturday last about twenty of the local Golf Club proceeded in brakes to Inverneill, and played over Captain Campbell’s links.  The weather was good, and great interest was taken in the competition, which was for a silver medal presented by Captain Campbell. During the day Captain and Mrs Campbell showed every possible attention to the visitors, and lunch and tea were provided in Inverneill House in first-class style.  At the close of the match, which was twice round a course of nine holes, Mrs Campbell presented the medal to Mr A. MacBrayne and made a few remarks.  On the motion of Dr Cameron, Asylum, a vote of thanks was awarded Inverneill for his kindness, and after a few complimentary remarks by ex Provost Menzies three hearty cheers were given for the laird and his lady.  Captain Campbell made a neat and suitable reply, and again invited the club to Inverneill.” (OT 28.1.1893)

This became a regular occurrence, with records of meetings being held at least once, sometimes twice a year until 1896. Captain Campbell had been a keen member of the Lochgilphead club and was elected Captain in 1896. 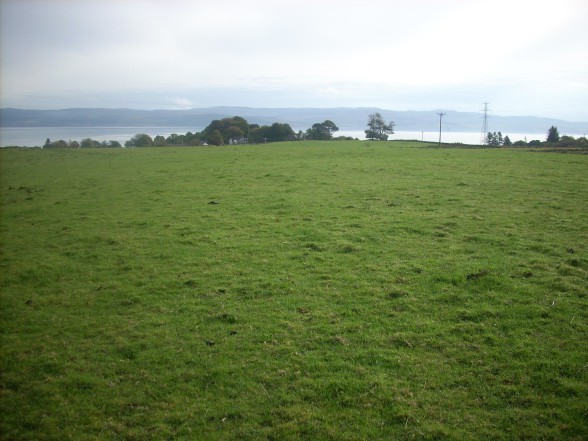 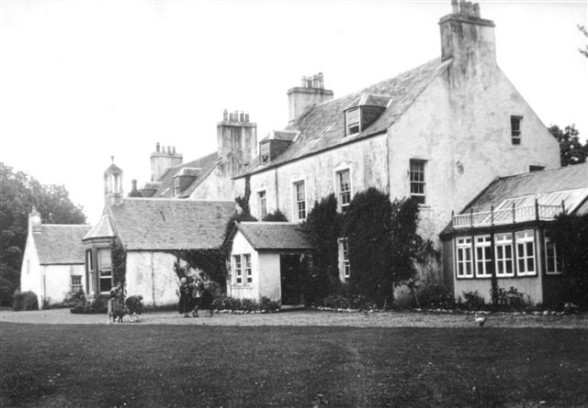 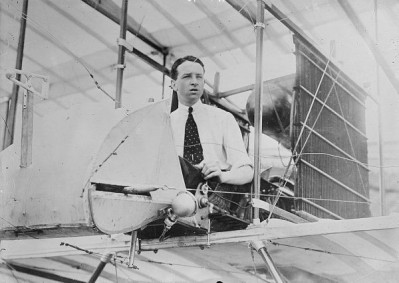 Argyll.  First mentioned 1894.  "Several years ago the Golf wave invaded Oban, the Charing Cross of the Highlands. As in Oban, so in the neighbouring villages of Taynuilt and Dalmally; and the latest inauguration to be recorded in this district is that at Kilchearan, on the Isle of Lismore situated in Loch Linnhie, which took place on June 23rd, when the owner of Kilchearan House, Mr. Thomas Sopwith, ( In Picture ) invited a team from the Oban Club for that purpose. The course has been beautifully laid out, and it rather astonished the visitors to know that it had been done by the owner himself, although a mere novice at the game. The weather in the forenoon was rather wet and boisterous, but about three p.m., when play commenced, rain had given place to sunshine, and the four couples who started had a thoroughly enjoyable game. Several of the greens were newly cut, and the strong stumps of the grass made putting upon them uncertain but in the estimation of the visitors the principal attraction of the course lay in the unusual length of the holes, coupled with a plentiful supply of natural hazards, several of which were thoroughly dangerous to all but the most careful player. In several of the fields the grass was rather long, which accounted for the scores being somewhat high. After having been most hospitably entertained by Mr. Sopwith, who had accompanied the first couple round the course, the visitors returned to Oban by his yacht Bessie, three cheers being given to Mr. Sopwith and his family as the yacht steamed out of the bay.

Although the links are private, the owner will be delighted to allow golfers who may be in the neighbourhood the privilege of a game, the enjoyment of which will be greatly enhanced by the charming nature of the surrounding scenery of mountain, rock, and sea, which may be fitly described as grandly picturesque.

The island also possesses several interesting relics of antiquity, among them being Auchindown Castle, which, anterior to the Reformation, formed the residence of the Bishops of Argyll." (G(W)3.7.1894)