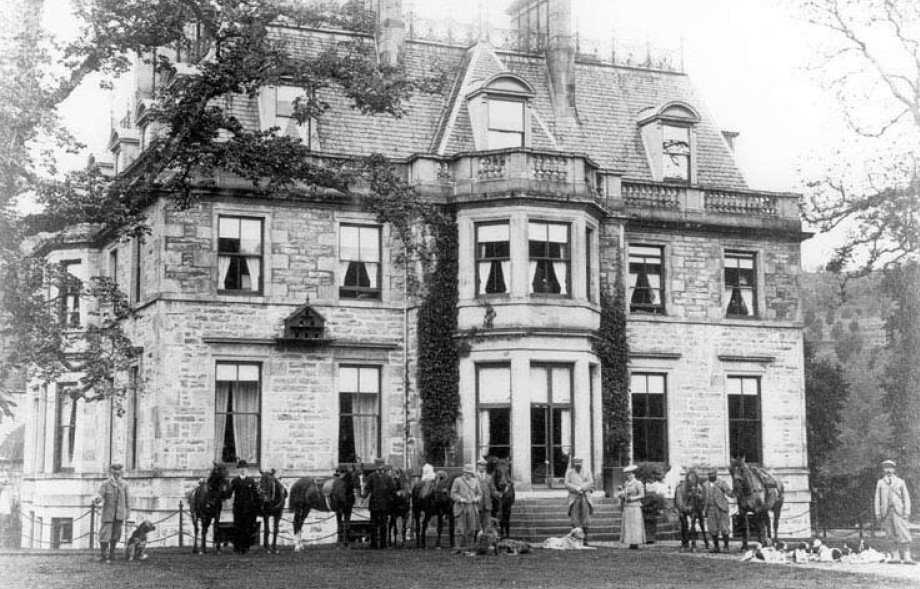 The following private courses have been identified:

Ardverikie, Laggan, Invernessshire.  Six miles south of Laggan on the Fort William road, a private course on the property of Sir John Ramsden - over which locals were allowed to play.  Open just after WW1.  Source: Local Gamekeeper whose father worked on the estate. No further information available from the estate office. 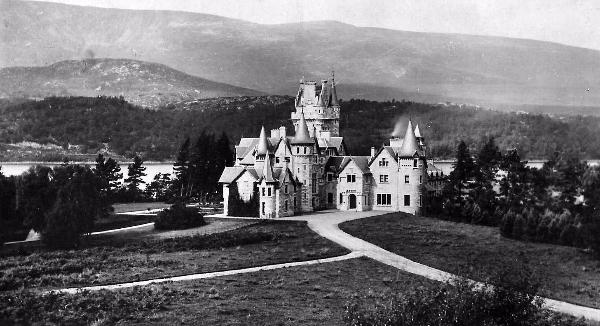 Balavil, Invernesshire.  An 12-hole course on the property of Mr McPherson.  "Mr & Mrs Macpherson of Balavil very kindly invited the lady members of Kingussie Golf Club to a match over the private course at Balavil last Saturday. The course, besides being delightfully situated and pleasant to play over, the holes being of varying lengths and character, is an excellent test of golf, and its greens are in a first class condition. Two rounds of 12 holes were played and the winning lady carded an excellent 100. Handsome prizes were awarded by the hosts." (BR)

Members from Newtonmore, Insh, Alvie and Kingussie clubs were invited for a day's competition with the prizes presented by their host.   (G(W) Vol XI}

The remains on the course can still be seen, and there is one elevated tee and a couple of bunkers still remaining.

There was also a small course, shown below, which ran from the back of Chapelpark Farm up to Lynvoan Cottage. (Allan Macpherson-Fletcher, Estate Office) 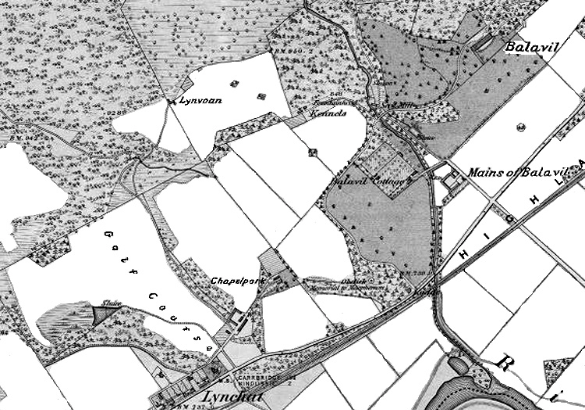 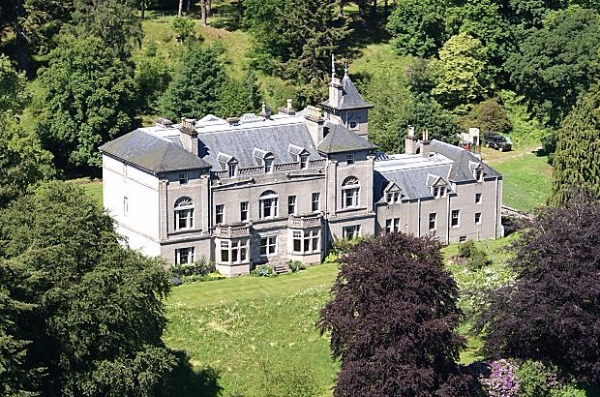 Castle Leod, by Strathpeffer. A9-hole course in the castle grounds, the home of the clan Mackenzie. The aerial photograph, taken in the 1950’s, shows the layout of part of the former course. 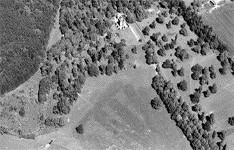 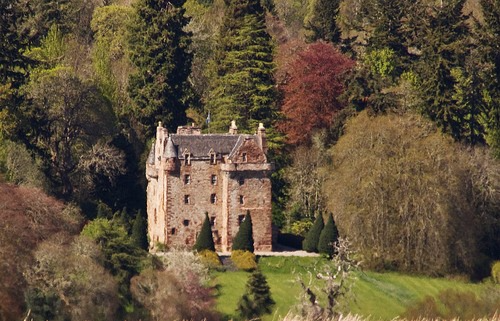 "On the evening of Saturday, the members of the above club held their annual competition.  The green was in good order, and the weather being beautiful, the meeting was very enjoyable.  The first prize, a silver cup was won by Miss Malkie, with the good score of 93 strokes; the second by Mr Don. Grant; third, Mr A. Fraser; fourth, Mr H.A.Malkin; fifth,Mr Maciver; sixth Mr J. Grant.  Several special prizes were also given to longest drive  1.  D. Grant 2. D. Macbain; best putting on the green 1.  J. Grant; 2. H.C. Malkin.  The prizes were generously presented by Mr and Mrs Malkin, Captain Ralph, the lady visitors at Corryborough House; Master and Misses Makin, also Messrs Fraser and McColl, Inverness; and Mr Mackintosh, Glasgow.  The contest being over, Mrs Malkin, as usual, kindly entertained the players to a service of tea and cake, and handed the prize to the winners after which cordial votes of thanks were awarded to Mrs Malkin, and Mr Malkin the president of the club" (NC 18.9.1895). 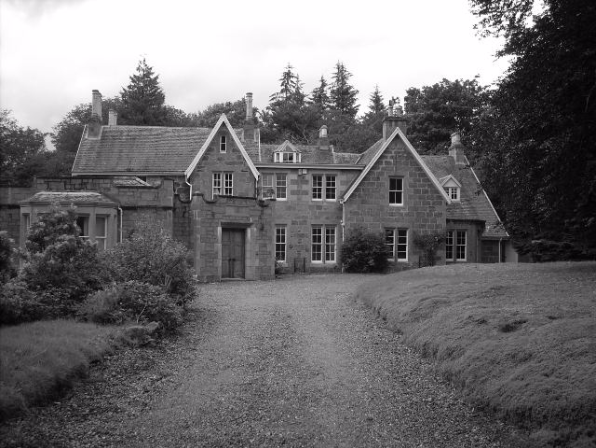 Craig Dunain Asylum. A 9-hole course in the grounds of the hospital.

“The grounds were comforting. There are no grounds at New Craigs, beautiful view, but where's the pond? Where's the football pitch? Where's the golf course? They are all at Craig Dunain.” (Mhairi, ex-staff] 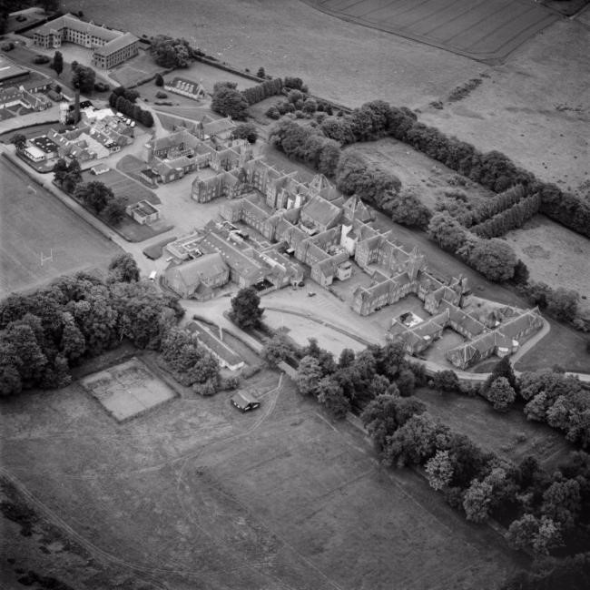 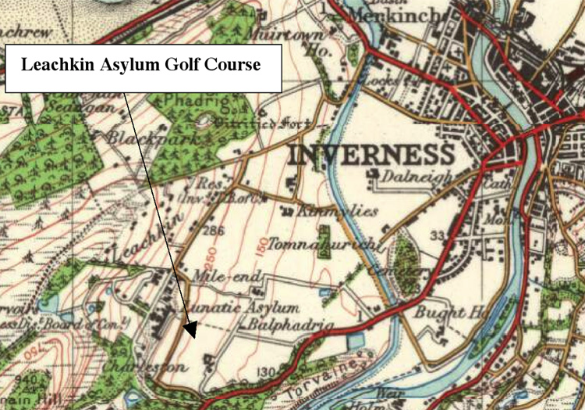 “The golf course has become a building site and housing estate but I was told by my father, who played the odd round there with my uncle, that it was a decent 9 hole course, albeit challenging due to being on the side of a hill”

“Yes my father and I played that same golf course on a number of occasions, (it always reminded me of a mini Strathpeffer) It was remarkably well kept and very tricky for all it's size. Sad to hear of it's demise.” (Contributors to Caley Thistle on line.com)

Opened in 1864 as the Inverness District Lunatic Asylum, the name was Changed to Craig Dunain Hospital in 1947. It was closed in 200, because of structural faults, and the medical facilities relocated at New Craig.

Guisachen, Tomich, Inverness-shire. A 9-hole course on the estate of Lord Tweedmouth.

Lord and Lady Tweedmouth and Tomich, the model village

Lord Tweedmouth who purchased the sporting estate of Guisachan also pioneered the sporting dog breed, the Golden Retriever. The estate included the old village of Tomich and he not only cleared the crofts but re-sited the crofters in a new ‘model village’- the present Tomich. The house known as “The Brewery", which he rebuilt gets its name because it was previously a base for whiskey smuggling. Lord Tweedmouth built a new large mansion house with a golf course, upgraded roads and paths, planted trees and improved farming practises. The large trees on the estate drive mark the burial sites of favoured coach horses. Winston Churchill was a frequent visitor and learnt to drive around Tomich! 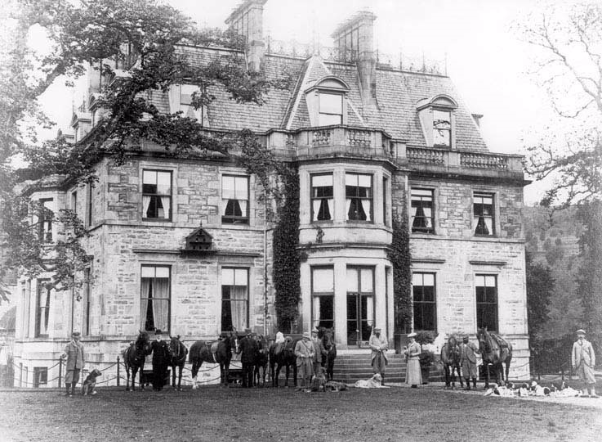 A hunting party at Guisachan House.

Hyskeir Lighthouse. A One-hole course built by the lighthouse keepers, for their recreation. (Gazetteer for Scotland)  The lighthouse was automated in 1997. 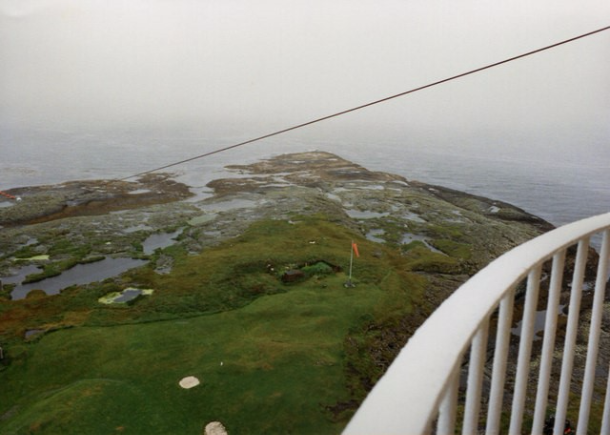 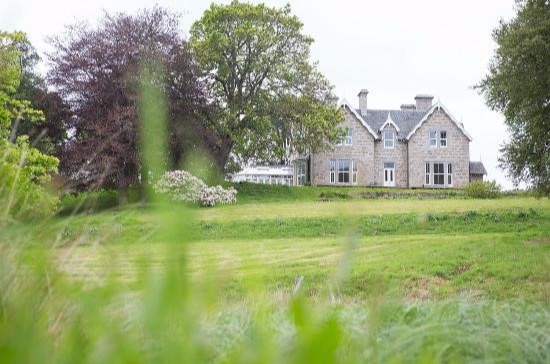 Ness Castle, Inverness. Laid out 1888. “On Saturday, a considerable number of Inverness golfers met at Ness Castle, at the invitation of Mr Fountaine Walker, to compete for a handsome silver medal which he has presented, and which will be played or annually.

Though only formed three years ago, the course, which is of nine holes, is already in wonderfully good condition, while putting greens leave nothing to be desired. Considering that most players were new to the course, and the difference in turf from seaside links, the scores were fairly good.” (NC 10.10.1891)

“The sylvan beauty and charm of the picturesquely situated nine-hole private golf course in the beautiful grounds of Ness Castle, Inverness have become known to quite a number of local golfers and visitors during the past two months. The privilege of playing over the private course is due to the kindness of the Hon. Mrs Smyth, who in a hundred and one ways is helping philanthropic institutions in the capital of the Highlands. A small charge is made for playing over the course, and already a tidy sum has been gathered, and will go to swell the funds of the Jubilee Nurses’ Bazaar.

The course has quite an interesting history, and from the plan we reproduced it will be observed that the course is excellently laid out and possesses sporting advantages which are probably not to be found in any other private course in Scotland. The grounds are surrounded by woodlands and stretch out in front of the well-situated mansion-house. The course was laid out some forty years ago, when the estate was owned by the late Mr Fountaine Walker. A few old-time local golfers, who used to play over the links many years ago, have vivid recollections of the matches they were wont to take part in for the Ness Castle monthly medal. In those days the ‘guttas’ were used, and were perhaps better controlled than the light and airy balls that can now be sent such tremendous distances. The course, it is understood, was laid out by Chief Constable Mc Hardy, and extends to 1861 yards. The majority of the holes are short, but require no little skill to negotiate if the par score is to be recorded. If any of the rising Bobby Joneses or Duncans desire to improve their skill they might do worse than have a game over the course. The fairways are mossy, but there are many “alluring” rabbit holes ready to trap the careless or unwary. Lining the fairways are clumps of trees, and at some of the holes there is bracken and heather, which form pretty fringes, but require skill to be avoided. The outlook of the course is one of sylvan beauty.

Most of the holes can be done in iron play. The largest hole is 351 yards, while the shortest is 133 yards. 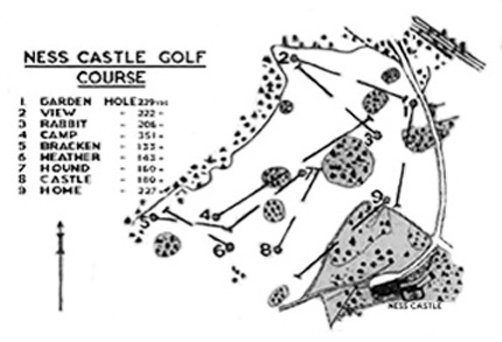 Golfing in such scenic surroundings, even with its hazards, is a great pleasure, and one may feel in unison with John Thompson when he said:-

Of a’ the joys this life can gie, the best I can name

Comes from the darling sport we lo’e, the old game

It cheers the heart of youth and age, our grand old game.

Truly the course is one to inspire sporting feeling, but is also calculated to test the skill of a player. It may be mentioned that the course will be open until the end of this month, and those who desire to have a round, and help a deserving local institution, the sketch, with the names and lengths of holes. May be useful.”  (IC 16.8.1929)