Brig  O' Turk Golf Club.  Instituted 1896.  A 9-hole course on which the hazards include bushes, heather, boulders, roads, a disused mill lade and the river. 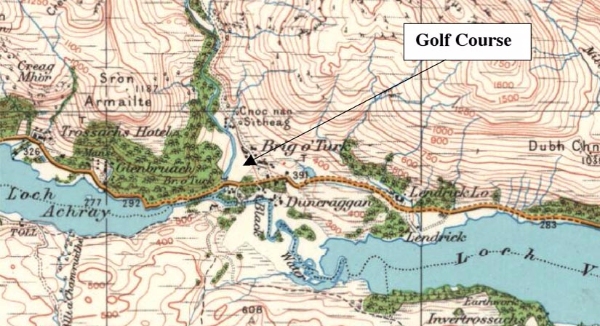 A Correspondent Writes :- No Hotel or any holiday resort need advertise nowadays unless the fact be blazoned that golf forms one of the attractions. This is resultant from the boom in the national game.

The famous haunt of artists, immortalised by Scott, may be made to boast of a golf course, which, added to its many other charms would make the Brig O’ Turk as near perfection as any spot can be. A green of nine holes, by the kind permission of Mr Cairns, Farmer, and Mrs McDairmid can be enjoyed amidst the finest scenery in the Highlands. 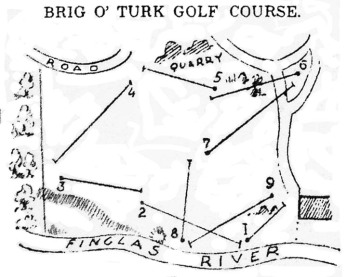 A short description and plan of the course laid out and played over may interest many of your readers. In playing the first hole, which is named  “ The River” the first drive must avoid some wild rose bushes, and if played too strong the chances are that your ball may be found in the water, from which there is a difficulty in redeeming it. Par play, should, however, be four. The second or “ Glen Hole” is one of the easiest to approach, has nothing more dangerous than rough grass, rushes, thistles, and tufts of heather, into which then ball has a wonderful tendency to enter. The third called the “ Targe Hole” demands special treatment. The drive must clear a stretch of heather, and if the line is not positively adhered to, young birches and bracken sadly entangle on the right side, while to the left a disused mill lade tends to interfere with the approach. Between these dangerous hazards lies the hole, with one or two minor irritants, provocative of rhetoric.

The fourth hole “ Roderick Dhu” has much the same difficulties as the last. The putting green has not yet become in the slightest degree what it may be ultimately. Number five or “ The Lady Of The Lake” so called from the fact that it is the highest and furthest from the water, is easily negotiated provided that you keep clear of a quarry, a cairn of stones, and the clumps of blooming heather. Number six “ Ellen’s Isle” is perhaps the most sporting hole on the course. In front is a Morass with boulders, a road, or rather two roads, with deep ruts, which trend downwards on either side of the line. The hole is situated on a small triangular space protected by a perfect zareba of the Juniperus Communis, which obstructions necessitate much skilful lofting. In driving to the Finglas Hole the only check to be anticipated is from a topped second, as the ground slopes ; hanging balls are frequent, and not usually in the best position for accurate placing, seeing that some exceptionally strong, wire like grass prevails in this particular part, where also the Orchis Intifolia, or Marsh Orchis, is frequent – too frequent. The next to be faced is called “ King Jamie.” Nothing is wanted here but a drive straight to the left of a post, which warns the player of the existence of apit into which a sliced ball is apt to drop, or, if it does get over, the river receives it. A perfect gold mine in the shape of lost balls is here abouts, and the rights of recovery might be floated as a limited company, only the ground would be difficult to acquire. The last, or home hole, looks one of the easiest : but looks sometimes beguile one. A rose bush to the right seems to have a wonderful attraction, and a ditch some yards past the hole claims many balls. The hole bears the name of the “ Silver Strand,” possibly from the way in which so many good intentions are stranded."   (Edinburgh Evening Dispatch 21.7.1896)