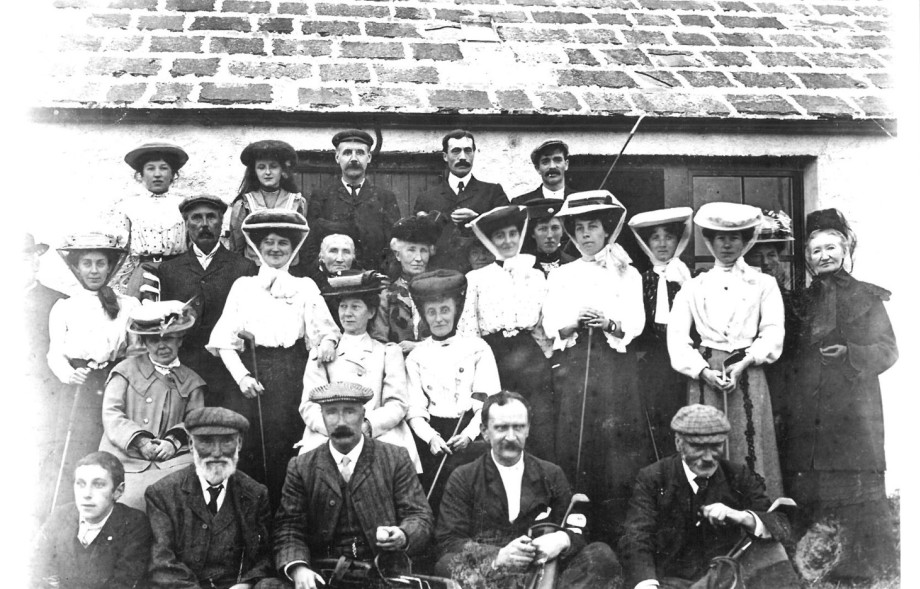 The course is situated on elevated ground.  (WWG) 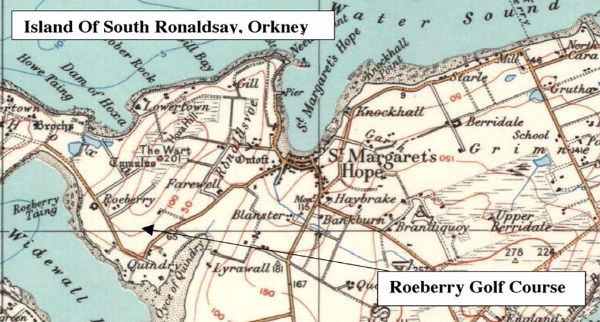 Opening Of A New

Exponents of the Royal and Ancient game in South Ronaldsay had a “ Field Day”, last Saturday. The occasion was the opening of the course of the newly formed Roeberry golf club.

Saturday forenoon was by no means promising for the opening ceremony, heavy rain had fallen all morning and representatives from two of the other clubs in the county were, to use a slang expression, not sure about it. Eventually Stromness drew back, but six “ Stalwarts” from Kirkwall essayed the journey. On landing at St Margarets Hope pier, rain commenced to fall heavily but rhis “ Damper” was quickly dispelled by the heartiness of the welcome extended by Captain Obadiah Sutherland, on behalf of the Roeberry club, and that gentleman’s assurance that the afternoon would be a fine one. And sure twas true. For, after dinner, all were pleasantly surprised to emerge from the hotel into brilliant sunshine, which continued all day – happy augury for the Roeberry golf club.

South Ronaldsay has done well. The course is an excellent little one, and, with the improvements effected from time to time will doubtless prove a boon to the island, and a potent attraction for visitors of the golfing persuarsion, to the county.

The links – some few minutes walk from St Margaret’s Hope, where, by the way, splendid hotel accommodation may be had – are charmingly situated on a gently sloping hill. Standing at what is to be the clubhouse – to the right may be seen the Pentland Firth with its seething tideways, with a lovely view of Swona, Stroma, and the still more distant coatline of the mainland. To the left the beetling cliffs of Copinsay are decernible, whilst all around is a panoramic view of beautiful country, such as the eye longs for and delights to feast upon.

At 2.30pm a large gathering had assembeled to witness the opening ceremony, the whole company being first photographed by Dr Maclean, who is at present in South Ronaldsay on holiday, and who has been one of the prime movers in the movement for the formation of the club. Honorary Sheriff- Substitute Cromarty of Widewall, as Captain of the club, in the course of his remarks formally declaring the course open, said, if anyone, a few weeks ago, had predicted that at this date a golf club would be an established fact in their midst, that prediction would certainly have been discredited. Yet here were they in a wondrous state of forwardness – having progressed by leaps and bounds – sufficient to establish a record of speed – in the initiatory stages at least – in the annals of any golf club. There could be no doubt of the benefits of such an institution, for besides affording a pleasant and healthful recreation to those residing in the island, the outcome of it would surely be to draw visitors in greater numbers to their shores, and be the means of retaining them for longer periods.

That was a step in the right direction and of advancement indeed in the social progress of their dear old isle. But whence had sprung the motive power to bring about the speedy and happy culmination of events they had met to inaugurate.

In the main, the generous actions of Mr and Mrs Gray of Roeberry had indeed made all things smooth. They had met them at every turn to assist. The unbated energies of Dr Maclean in carrying forward every detail of the work had also been a marvel. Other kind friends had also been prominent in offering trophies for competition. To each and all of these they desire to tender their most sincere thanks. To Mr and Mrs Gray especially they desired to convey the best wishes of the members of the club, and as time went on they were confident that they would have the pleasant satisfaction of knowing that their generous course of action has been appreciated alike by the club and the community at large : thus the ultimate success of the Roeberry golf course would be assured. He might here venture to express the desire that Mr and Mrs Fray would ere long take up a more permanent sojourn in their midst, and assume the leading position in the community which they were so well fitted to occupy. With these remarks he had just one more very pleasant duty to perform – to ask Mrs Gray to accept from the members of the golf club a memento of this day, a token of their esteem and regard for her on this and every occasion. He had much pleasure, on behalf of the club, in handing to Mrs Gray of Roeberry, a set of clubs and bag, bearing the following inscription – “ Roeberry Golf Club, presented to Mrs Gray of Roeberry on the opening of the course 15.9.06,” and trusted they would prove to her a source of much pleasure during the period of each year she was in the island.

Mr Gray briefly responded on behalf of his wife, and thereafter, Mrs Gray, amid cheers, gracefully drove off the first ball, whilst simultaneously a flag was burst from the flag-staff.

An enjoyable hour was then spent on the course by the golfers of the party, competing for a prize presented by the club. The best score was handed in by Mr Cromarty, Union Bank, St Margaret’s Hope, who had gone the riound of nine holes in forty-one strokes, followed by Messrs White and Inkster from Kirkwall, each with a score of forty-four.

At the conclusion of the game the company repaired to one of the buildings on the course, which we believe, is to be fitted up as a clubhouse, and there partook of the hospitality of the Roeberry golf club, Mrs Gray of Roeberry ; Mrs Baldwin ; Mrs Sinclair, Braehead ; Mrs Allan, St Margaret’s Hope ; Miss Rae, Angie Cottage ; and Miss Cromarty, Union Bank House, acting as hostesses. One feature is worthy of mention – the “ christening” cake. On it were two silk banners one with a beautifully executed painting of a lady presumably Mrs Gray – in the act of driving off a ball, whilst the other banner bore an inscription suitable to the occasion. We were informed that the painting was the work of Miss Dewar.

Mr Gray ( President of the club ) having intimated the result of the competition, said he had to thank them on behalf of Mrs Gray and himself for the very handsome present with which the members of the club had presented her. It would be prized as a memento of the occasion, and in the years to come they would look back with pleasure to this day. He had also to thank the members of the Kirkwall club for their presence. Stromness had intended to send four representatives, but at the last moment, he regretted to say, were unable to come owing to the inclemency of the weather.

He hoped they would have an early opportunity of meeting the Kirkwall club in a friendly competition. On this occasion they were just beginning the game, and they did not like to match themselves against professionals. ( Laughter )

Mr White, on behalf of the Orkney golf club assured the Roeberry club they had enjoyed the day splendidly, and had been amply repaid for facing the dangers of the weather. ( Laughter )

He congratulated South Ronaldsay on obtaining such a good course – they had splendid material to work upon. He called for three hearty cheers for the Roeberry club.

Mr Gray responded, and on his call three cheers were also given for the Kirkwall club.

It was now past five o’clock, and it was with deep regret that the Kirkwall members had to betake themselves to St Margaret’s Hope to re-embark. The outing had been most enjoyable to all, and one of which they will retain many happy memories. 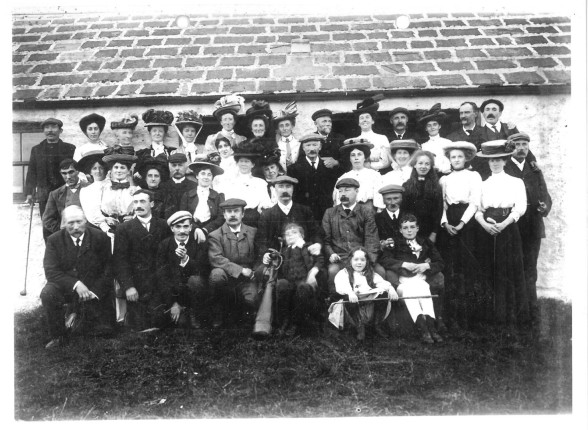 It is an encouraging sign which augers well for the success of the Roeberry golf club that so much interest should be evinced in its early career by visitors to the island. Determined efforts are being made to liquidate the cost of the new clubhouse, and provide funds to enable the members to embark on a scheme for the improvement of the ground. Following a lecture concert on behalf of the club there was held at the Cromarty Hall on Thursday, 22nd inst., a Cinderella dance. Wholehearted enthusiasm for the success of the function was displayed by its promoters, to whom the result must have been highly gratifying.

Foremost in the list of helpers was Miss Maclean ( London ) the pioneer of the undertaking. Her self imposed task was earnestly carried out and it was mainly due to that lady’s indefatigable efforts that such a measure of pleasing efficiency marked the general arrangements. The idea of thus helping to relieve the young club of its financial burden was spontaneously taken up by others, including Mr Wm. Cromarty, Widewall, who kindly lent the hall ; Mrs Gray, Roeberry, and the following visitors from Edinburgh ; Councillor Cuningham, who proved an adept in terpsichorean art ; Mr and Mrs J. Russell ; Miss Russell, an accomplished pianist, who provided the major part of bright and tuneful music ; and Mr J. Robertson, St John’s College, Cambridge, who also assisted at the piano. Mr R.C. Hay, St Margaret’s Hope, supplied flags for the simple but effective embellishment of the hall.

Sandwiched between the dances were songs, which offered an agreeable diversion as well as a pleasant respite, particularly to the over-worked gentlemen whose limited presence made the demand on their services somewhat arduous.

Mr J. Russell sang the “ storm field” in a vigorous style and with artistic perception whilst Councillor Cuningham rendered a scotch song, the quaint humour of which was relished, with the utmost avidity.

The Misses Gray danced the “ Sailors Hornpipe” in a graceful manner, whilst the younger girl delivered a recitation, which would have done credit to one of maturer years. There were 16 items on the programme, the obligations of which were carried out with unflagging energy, and for those who could not dance the zest with which the couples entered into the eddying maze of the waltz was a source of much interest and pleasure.

Mr Wm. Cromarty, at the close of the proceedings paid a deserving tribute to the services of Miss Maclean and Miss Russell, who were accorded a hearty vote of thanks. Special mention was also made of the fact that Mr Russell, in addition to his previous gift of a claret jug, had offered a medal for competition by the ladies of the club. 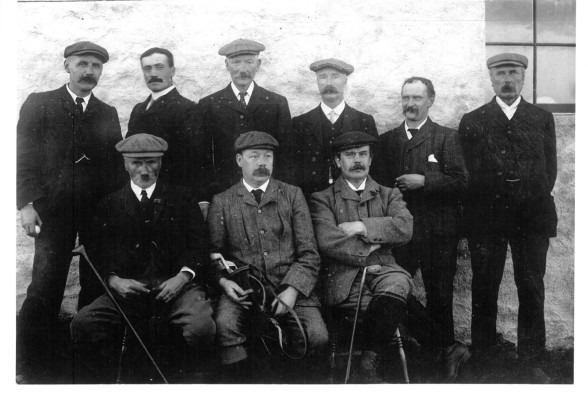