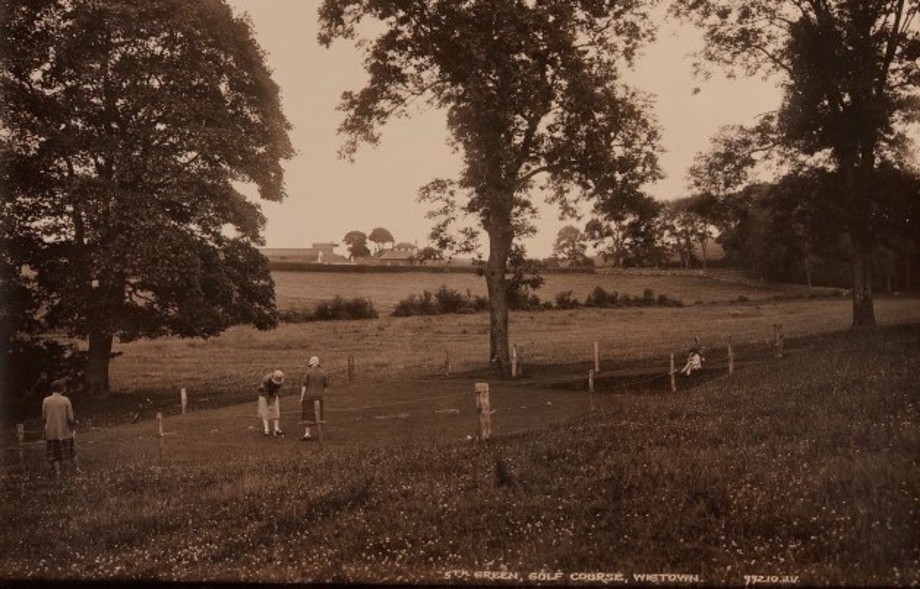 Wigtown Golf Club. Instituted 1894. Firstly, a nine-hole course at Borrowmoss, anf then  Fard then at Philipshill.

"The propriety of forming a golf club in Wigtown has been for sometime been under the consideration of a number of gentlemen resident therein or in the vicinity. In order to do so the preliminary difficulty of finding, and the greater one of obtaining, suitable ground for a course had to be overcome. Two or three gentlemen conversant with the requirements of a golf course set themselves the task of finding suitable ground, and through the kindness of Messrs Lochrie, Kirkland, and Mr Murray, Borrowness, the ground selected has been obtained gratis. These difficulties so successfully overcome, it was resolved to form a club, and for this purpose a meeting was held in the Galloway Arms Hotel, Wigtown, on Wednesday evening, when there were present – Provost Black, who presided, Dr Shaw, Dr MacLelland, Messrs C.A. McLean, A.D. Walker, R. McWilliam, W. Routledge, J. Edgar, W. Sproat, J.K. Smith, William Carnochan, J. Clarkson, J. Clark, &c.

It was agreed to adopt the rules of the St Andrews Golf Club as far as applicable to the Wigtown course, it being left to the committee of management to formulate any special rules necessary.

It was also agreed that the entrance fee of members be 2s 6d, and the annual subscription was fixed in the meantime at 5s. It being understood that the gentlemen present formed the club it was agreed that all persons wishing to join must be proposed and seconded before being admitted members.

It was further agreed that the remuneration of caddies to be paid by members wishing their services be 3d. per round. As the course selected is considered by experts to be most suitable, it is expected that the new club will have a successful career.

The same article as above appeared in the Wigtown Free Press on 31st May 1894.

"The first competition amongst the members of the Wigtown Golf Club took place on their links last Saturday afternoon. The day, though rather warm, was suitable for golfing, and a considerable number of members turned out. The prizes offered were three in number, and consisted of golf balls. To make the competition more interesting the tyros were allowed a handicap, the limit being 18 strokes or a stroke per hole. The result was as follows :- 1, Mr J. Clarkson, scratch, 104 ; 2, Mr D. Macintyre, 125 –14 = 111 ; 3, Mr J. Edgar, 129 – 14 = 115."

"A meeting of the Wigtown Golf Club was held in the Galloway Arms Hotel on Friday evening last. There was a fair turnout of members, and Provost Black presided. The Hon. Secretary and Treasurer, Mr C.A. McLean, submitted his accounts for last year, which were audited and found correct, and showed the club to be in a flourishing condition financially.

The office bearers were all re-elected, and a committee was appointed to lay off a new course. We understand that this committee has since met and chosen a new course, and the opening game will be played this afternoon at Borrowmoss – Mr Murray, the genial tenant of that farm, having kindly granted permission to have the course on his links."    (GG 4.5.1895) 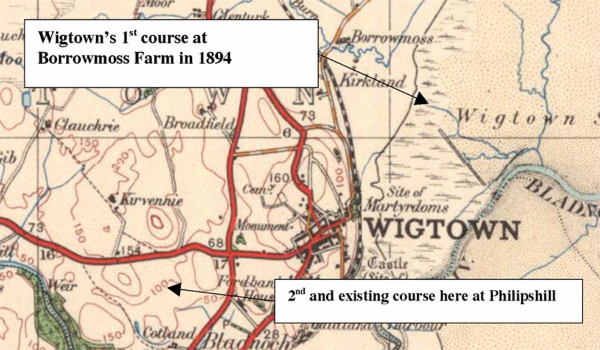 "On Tuesday a well attended meeting of those interested in the formation of a golf club was held in the County Buildings. The expressions of those present were in favour of having a golf club, and a committee was appointed to make enquiries as to a suitable course and other matters, and to report to a future meeting."

"“A second meeting of those interested in the formation of a golf club for Wigtown was held in the County Buildings on Monday evening, Provost Shaw presiding over a good attendance.

Reports were submitted as to expense, and a plan of the proposed course, on four fields in the vicinity of Philipshill, which are Burgh Lands, was presented and approved. The rent asked for the fields was considered satisfactory, and arrangements were made for raising funds.

It was agreed that the members subscription should be fixed at £1 1s for gentlemen, and 10s 6d for Ladies, no entrance fee being charged for the first year.

“The golf course was formally opened on Thursday afternoon by Mrs Shaw. There was a good attendance and most of those present afterwards had a round on the course.

From all appearances the game is likely to prove as popular in Wigtown as it has elsewhere, and the course is sure to be an additional attractive feature for visitors.”

The authors have a copy of the Wigtown GC Minute Book, and the following has been extracted from it:

“Perhaps surprisingly, the club prospered through the Great War, during which it organised Whist Drives and special competitions in aid of the (troops’) Comfort Fund,, and, although it never had more than 80 members, it continues steadily, holding monthly medals and playing matches against Whithorn Golf Club in the mid-1920’s and 1930’s. It came under pressure with the onset of WW2, and at each AGM from 1939 onwards the question of continuing as regularly raised, until 1943 when it was decided to close the club.

In March 1948, a meeting was held to determine whether the club should be resuscitated. The former course was unavailable, and other locations were inspected and found unsuitable. The interim committee wrote to St Medans Golf Club and Kirroughtree Park Golf Club with a view to being allowed to play on their courses. Both clubs welcomed the proposal but nothing was ever formally agreed. The final minute states that it was decided that individual members should be encouraged to join the club of their choice on a personal basis.”

The current Wigtown and Bladnoch Golf Club was founded in 1960, on a course close to the former course.