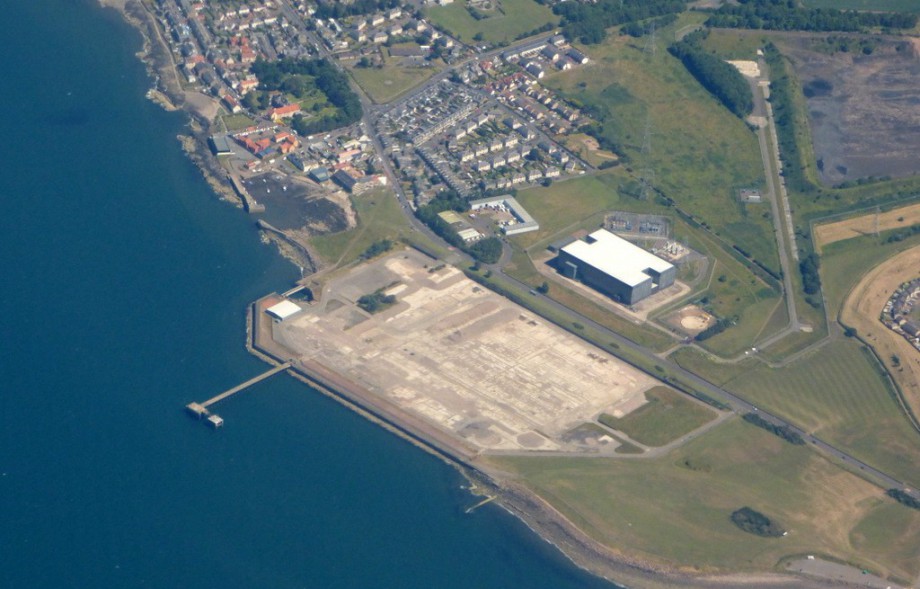 Instituted 1856.  Originally a 6-hole course on the narrow Preston Links to the east of the town.  Par play for the holes was 453453 = 24.  The club got its name from the thorn tree which marks the spot where Colonel Gardner fell at the Battle of Prestonpans in 1745. 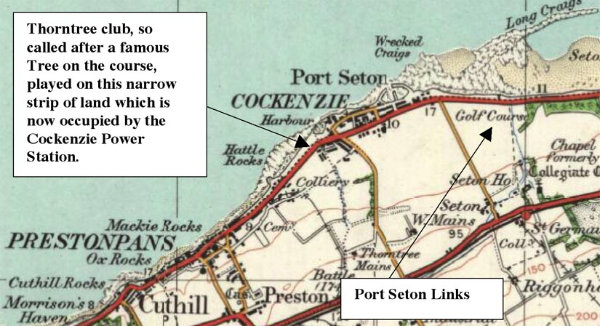 What prompted the players to form themselves into a club, we did not discover from any written records they may have left in the way of minutes.  Such minutes, we believe, once existed but went missing.  The lot of the Thorntree Club has not been at all a happy one. At times its existence was so very feeble that it was supposed to be dead. In these hibernating or comatose periods the club records must have disappeared. That the club was healthy and vigorous at the outset, there are many evidences. We have before us the original set of Rules and Regulations which, as they contain some original points and are not long, may here be quoted:

Rules of the Prestonpans Thorntree Golf Club.Formed on 22nd December 1856

2.   The business of the club shall he conducted by a Chairman, Secretary, and the Committee to be elected at the August meeting of the Club.

3.   In playing for the Medal, three rounds shall be played. The players to be paired off by ballot thus —the last two’s on the list to mark for the first two’s, and vice versa.The cards being shown to the competitors at each hole, in order to satisfy them.

4.   He who holes the round in fewest strokes shall be considered the successful competitor.

5.   The party first starting off shall be allowed to reach the second hole previous to the succeeding party striking off.

6.   In the event of a ball being lost sight of, five minutes shall be allowed to look for it, and if not found, the party losing the ball shall drop one near where it was lost, lose a stroke, and play with the iron.

7.   When a ball is lying where it is considered unfit to be played, the party shall be allowed to put the same on the green, but behind the hazard, if on the beach on the sand, by losing a stroke and playing with the iron.

8.   All loose impediments within twelve inches of the ball may he lifted when the ball lies on the green. The putting-green may be cleared within twenty yards of the hole.

9.   When the balls lie within six inches of each other, the one nearest the hole shall be lifted, and placed, after playing the other, as near as possible, to its former position.

10. Whatever happens to a ball in playing, such as striking a person, or cattle, or any animal, it shall be considered a rub of the green and submitted to.

11. If any player move his ball previous to striking it, he shall lose a stroke, and no pressing of the green whatever shall be allowed, under penalty of losing a stroke.

12. New holes shall be made on the medal day at places agreed on by the Committee.

13. No speaking or shearing the ground to a player allowed. When a party is playing, a breach of this rule shall forfeit sixpence for each offence.

14. Members may be admitted into the club at any time during the year by the recommendation of the Committee.

15. Any member being in arrears shall not be allowed to play.

16. Each member shall provide himself with a copy of these rules.

('Shearing the ground‘ is a phrase which we have not met before. Rule 3 is also peculiar Prestonpans.) 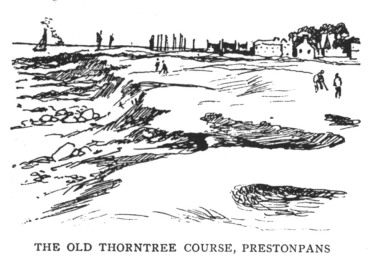 Possibly the old club might have vanished out of sight altogether but for Mr. John Edgar, one of the original members, and a good player, who still survives. On our first visit to the green a few years ago, we found that he kept the flags of the holes in his office, from which we adjourned to have two rounds, the ‘provost’ carrying the whole paraphernalia under his arms. Had the precaution not been taken to remove these after the game, they would never have been seen again, so low had the condition of golf sunk at the Salt Pans. The club in 1893 became a little lively.

In November 1894 a movement for the enlargement of the course was started, and a deputation of the golfers, consisting of Captain Dewar, Provost Edgar, Dr. McEwan, Messrs. E. Johnston, (secretary) John Sandilands, D. Adams, John Bower, Thomas McWalter, C. Lamb, John Kay, and William Wilson, waited on the trustees of the Schaw Bequest, by whom the ground is held for behoof of various beneficiaries, to get the course extended by including thirty-six acres of ground on the opposite side of the road from the old course.

This request was granted, and a new course made, consisting of four holes on the old ground (13 acres), and eight holes on the new ground (33 acres). At a meeting in February 1895 it was resolved to ‘reconstitute the club as at 1st January last,’ with the adoption of the old rules, subject to any revision that might be rendered necessary. The first match over the new course took place on 18th May 1895. The starting point is in the new ground close to Prestonpans. After the first hole, the player crosses the road and plays the four holes of the old course, then passes back over the road to play the remaining seven holes in the new ground, finishing near where he started

making a total of 3130 yards for the twelve holes.

“At the present moment the old Thorntree Club at Prestonpans appears to be on its death-bed.  For some time past it has not enjoyed that measure of good health which has been so lavishly bestowed on some of its neighbours along the coast of the “Holy Land of golf,” but the blush of its rose renewed with every spring was always sufficient to dispel any suggestion of decay, at least in recent years.  About a year ago, however, the collier came along with his pick and shovel, and, not content with stealing the rose, like the false lover,he seems to have uprooted the old tree itself.  The garden ground along the coastline of East Lothian being already well stocked with golfing plant, the Thorntree Club is in imminent danger of dying a most unnatural death.  A few years ago the Forth Collieries (1903), Limited, resolved to reopen the old Prestonlinks coal pit, and to lay down plant machinery for working what is known as the Crown Pit, extending about three quarters of a mile beneath the Firth of Forth.  For this purpose and in order that they might construct a railway to the pit head the company acquired by lease a portion of the links played over by the Thorntree golfers, with the result that they have been dispossessed.” (S 13.12.1904)

The entrance-fee of the revived Thorntree Club is l0s., and the annual subscription is the same. The first captain under the new regime is Mr. F. Cadell, and the (alleged) joint—secretaries are Messrs. G Hunter and E. Johnston.”(GBEL)

The club is at present without a course and competitions are played at Gullane Old Course (WWG1909).