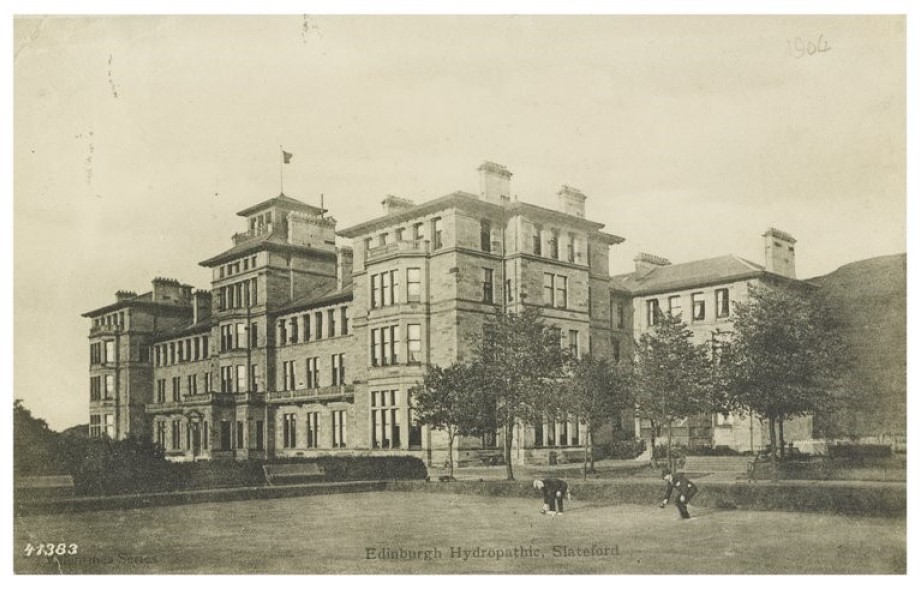 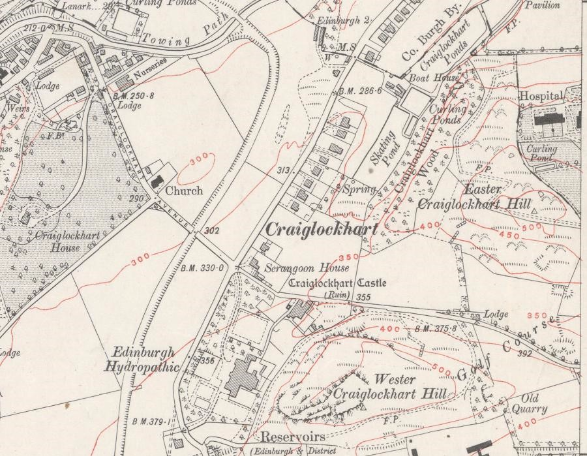 “On Saturday afternoon a twelve hole course which has been laid out in connection with the Edinburgh Hydropathic at Craiglockhart was formely opened for play by Mr MrsLewis McIver. The ground upon which the course has been laid out is thirty four acres in extent, and embraces the eastern slope of the Wester Craiglockhart hill as well as adjoining fields leased from the city parochial board for a period of ten years.

From the nature of the ground a good deal of climbing has to be done, but the round is none the less enjoyable on that account, for the natural cofiguration of the ground affords pleasant variety to the play.

Willie Park had the laying out of the course and the manner in which the holes are placed shows that the natural features of the ground have been fully taken advantage off. At various points in the round magnificent views of the pentlands are obtained, and the third green – which is placed on the highest point on the hill – commands a prospect as wide as it is charming.

A numerous company of ladies and gentlemen – including many of the directors and shareholders of the company which owns the Hydropathic – were present at the formal opening, previous to which lunch was served in the dining hall of the house. Among those present were Mr George Beilby, the chairman of the company, and Mrs Beilby, Mrs McIver, Mr Macfie of Borthwick Hall, Mr John Clapperton and Mrs Clapperton, Councillor Mortimer and Mrs Mortimer, Mr Beatson of Firhill and Mrs Beatson, Mr and Mrs Todd, Mr and Mrs John Harrison, Dr James Ritchie and Mrs Ritchie, Dr Ronaldson and Mrs Ronaldson, Mr Phillip, S.S.C, and Mrs Phillip, Mr Thomas White, S.S.C. and Mrs White, the Rev Mr Morgan and Mrs Morgan, Mr KerrW.S.and Mrs Kerr, Mr Shiells and Mrs Shiells. Unfortunately the weather broke down somewhat just as the company gathered about the starting point, which is immediately to the south of the building, but the ominous clouds brought nothing worse than a heavy shower, and the remaining part of the afternoon was fair if dull.

Mr Bilby having presented Mr McIver with a beautifully-finished cleek, a ball was teed, and he addressed it in a business like way. He certainly did not press and if the opening stroke was not far it was sure enough, and the line was irreproachable.

Mr McIver then declared the green open for play, in doing so, he began by expressing the pleasure which it gave him to have that part of the day’s proceedings assigned to him. He was, he said, very grateful for the invitation which the proprietors of the Hydropathic had given him, and he was also very much delighted to become the possessor of the admirable weapon which had been presented to him. The pleasure he had in being present did not suffer in the least from the fact that some of his friends were inclined to look a little askance at him because he occasionally enjoyed himself – at all events, they commented upon it as a grave irregularity. He might however, plead that occasions like that represented his only relaxation, and surely he was entitled like other people to have his customary weekly half-holiday. “Homo sum nihil humanum a me ulienum puto “: and if his interest in human affairs was not confined to his own immediate occupation, he did not think that ought to be imputed to him for umighteousness. At all events, whether he was right or wrong in rejoicing in the society of “ Brother Man “ still mere of sister woman, he pleaded guilty to the charge in that particular, and he unhesitatingly declared not only that he regarded it as an honour, but as a great pleasure to be present that day, and to declare as he now declared, the green open for the pursuit of the Royal game of golf from that day – on all day’s except Sunday – to the residents of the Hydropathic. The ancient city of Edinburgh was not only highly favoured in the matter of natural and architectural beauty, but was especially favoured in many other material respects and no part of the city was so blessed in one respect as the southern suburbs, because they enjoyed all the amenities and comforts of city life, and had the benefit of city enterprise and at the same time of rural quiet – they had a share in the beneficence of the burgh council and of the burgh rates  –  and at the same time they could revel in the joys of gardens , trees, flowers and country life. Fifteen minutes took them into the middle of the city, into the bustle of the town – and a ten minutes journey brought them from the city to the b

Braids, where they could enjoy solitude, unbroken except by the companionship, perhaps of a “ Caddie “ and a cleek, and undisturbed except by the occasional cry of “ fore “.

The residents at Craiglockhart had up to that time enjoyed these privileges and they would now enjoy an additional one, for he thought that the golf course that had been laid out would materially add to the attractions at Craiglockhart. The residents at Craiglockhart were very much to be congratulated on that fresh proof of the enterprise and liberality of the proprietors of the Hydropathic in leaving no stone unturned – he should say, no putting green unlevelled – to secure their amusement and their health. The ground, as they would find for themselves when they came to go over it, afforded every variety which the game of golf demanded. It was not, perhaps, the most extensive, but he believed that it possessed all the difficulty which players particularly desired. He might refer to the beautiful scenery in which the players were placed, and he might tell them that from the third hole they could see thirteen counties. He  was not prepared to answer for that, but it occurred to him from that point of view of his own trade, what a beautiful situation that third hole would be for the secretary of a central electioneering office – they could just fancy how useful it would be to be able to see thirteen counties at a glance. He was afraid however , to the true golfer the natural beauty of the scenery, although very well in it’s place, was quite irrelevant, just as the keen foxhunter imprecated the “ beastly violets “ because they had destroyed the scent. He would not dwell on the scenery, but would hasten to assure golfers that the ground presented so many natural hazards, obstacles, and dangers as to obviate altogether the necessity for the construction of artificial bunkers, such as were necessary on the plains of some of the modern English links. He might add, while on the subject of the difficulty of the ground, that if it was not “ as deep as a well nor so wide as a church porch “ because at the eighth hole the line between ruin and success was not anything like so wide as an ordinary church porch – at the sixth hole, again, a danger existed and had come to be known as “ Wilsons Drop “ which was deeper than an ordinary well. If the course could not be dubbed as “ Royal and Ancient “ he was sure in time it would be regarded as both popular and modern. He would just add one remark of a personal nature. He dared say that they had observed the timorous and tentative manner in which – to use the phraseology of golf – he “ Addressed “ the ball. Now some of them might have deduced from the modest way in which he “ Addressed “ the ball that it was the first ball he had played, and he dared  say that they would have drawn their own inferences. Some of them again might have thought from the manner in which he had wielded the charming cleek given to him that he had exercised some restraint, and had avoided a display of skill and strength for the purpose of sparing the feelings of Mr Park  It was not for him to explain , having said so much, he had simply to declare the green open for play

The formal opening over, a foursome, in which Willie Park and Mr James Wilson opposed Mr John Harrison and Dr George Mackay started for the round. The professional and Mr Harrison had the drive off, with which a nice “ hazard “ in the form of a dyke has to be carried – the line of play being directly over the south shoulder of the hill. Neither of them made a particularly brilliant start. Park’s ball just jumped the dyke, and Mr Harrisons lay awkwardly close up to it. In the circumstances, the strokes were recalled, and on a second effort, both players got finely away. Most of the gentlemen present who were golfers had their clubs with them, and when this foursome had set off, a number of other matches followed a very pleasant afternoons golf being enjoyed. Park and Mr Wilson won their match by six holes.

The band of the Carabiniers was in attendance and played a selection of music on the lawn in front of the building."   (S 23.5.1892) 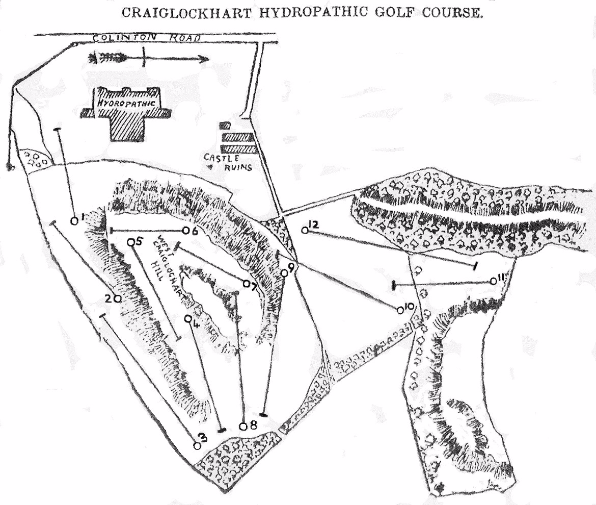 When the lease on the course expired in 1898, the Hydropathic company declined to renew it.