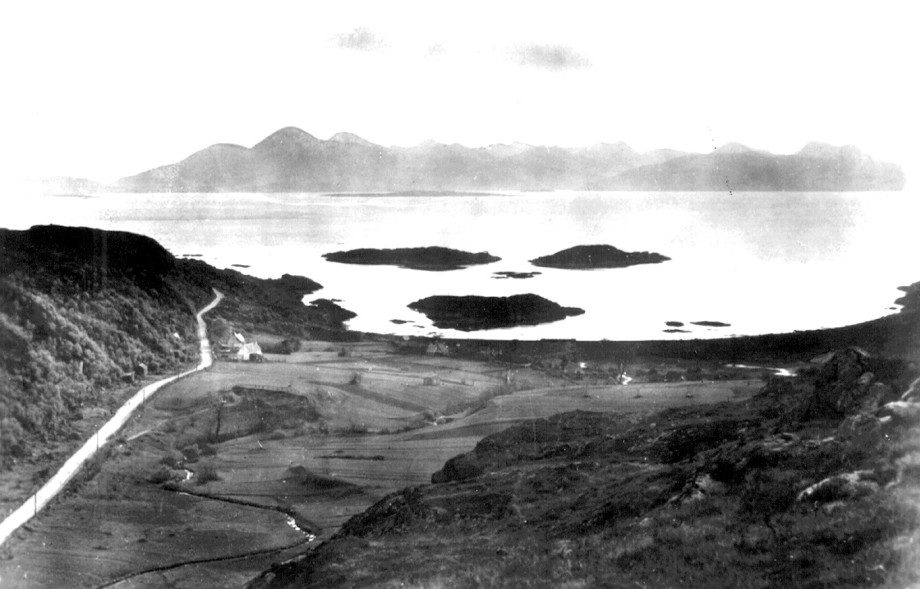 Balmacara Golf Club.  Founded 1908.  A sandy, 9-hole course,  in the grounds of the Balmacara Hotel, overlooking the narrows of Kylerea between the Isle of Skye and the Mainland. 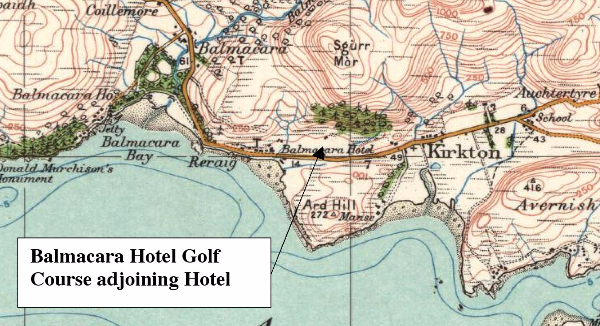 "A meeting of those who signified their intention to become members of the proposed golf course was held in the hotel last week.

About twenty years ago there had been a golf course here, but it was discontinued until recently. Mr Sinclair, Proprietor of the Hotel, kindly granted the ground to the club, and Mr Machardy of Inverness, who has had experience in mapping out courses, and himself a most enthusiastic golfer, very kindly laid out the course at Balmacara.

The Ross-Shire journal also reported on the same meeting and most of the text was the same. The following is the basis of their report.

"Several gentlemen have gone over the course, and expressed their highest opinion of it, and they remark that it would require of every player the utmost tact and skill in order to overcome the difficult natural hazards which make the course a truly sporting one. Beginning near the Hotel it should prove a source of added enjoyment and pleasure to the visitors who come for a holiday to this “ Mecca of the West” and they will no doubt appreciate the fact of it’s being laid out on Hotel Ground.

The course, which is a nine holed one, is beautifully situated, and the magnificent panorama of Mountain, Loch, and Glen, to be viewed by the golfer as he goes along would compare very favourably with any part in the highlands."   (RJ 28.8.1908)

"A concert in aid of the funds of this newly formed club took place in the Auchtertyre Public School on Thursday. Mr W.E.D. Simpson of London presided, and delivered a humerous address. The whole proceedings passed off without a hitch. The drawings at the door amounted to over £8.

"The golf course recently laid out at Balmacara, a few miles from Kyle of Lochalsh Station, was on Saturday last opened by Lord Blythswood in the presence of a large gathering of members.

His Lordship, who is president of the club, thanked the members for honouring him in asking him to perforn that duty, and complimented Mr and Mrs Sinclair, Balmacara Hotel, on removing a felt want by organising the club. Golf, said his lordship, was every respect a healthy game, and any devotee could in all sincerity ask god’s blessing on that form of sport – (Applause). He was glad that golf was unlikely to sink so low as football, a most excellent game in itself. It was free from professionalism except in so far as that was an absolut necessity for the good of the game. It would be an incentive to visitors to the district to know that the unsurpassable scenic beauty of Balmacara golf course was only one of it’s attractions.

After a pleasant game had been engaged in,the players and spectators were entertained to tea by Lord Blythswood. This was purveyed in Mrs Sinclair’s well known style, and thoroughly enjoyed by the company.

On behalf of the club generally, and Mr and Mrs Sinclair in particular, Mr Keith thanked his Lordship for his interest in the club.

In reply his Lordship said that games afforded splendid opportunities not only for promoting health of body but for enjoying stimulating intercourse with one’s fellowmen. Man was a gregarious animal, and he who did not desire to meet his fellows was unnatural and unfit to take a useful part in the life of his times.

The Treasurers report was submitted, and found to be satisfactory."

“Much interest and excitement have been aroused in Lochalsh by the unexpected visit to Balmacara Bay by the first-class cruiser Black Prince, where the warship is to remain at anchor till Wednesday. By the courtesy of the commanding officer, the cruiser is open to inspection by the public.

On Friday several of the officers, introduced by Lord Blythswood, who at present resides at Balmacara House, enjoyed themselves on the golf course attached to the Balmacasa Hotel, while a contingent of the crew played a game of football in a park provided by Mr Sinclair. On Saturday several of the officers and their friends shot over the Balmacara grounds, while several others fished on the lochs. 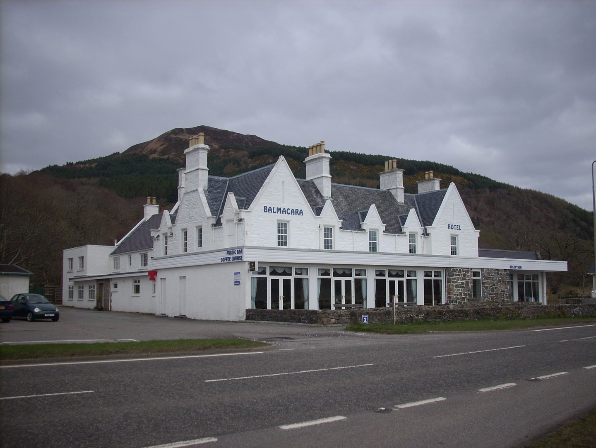 The golf course was situated to the South and rear of the hotel.