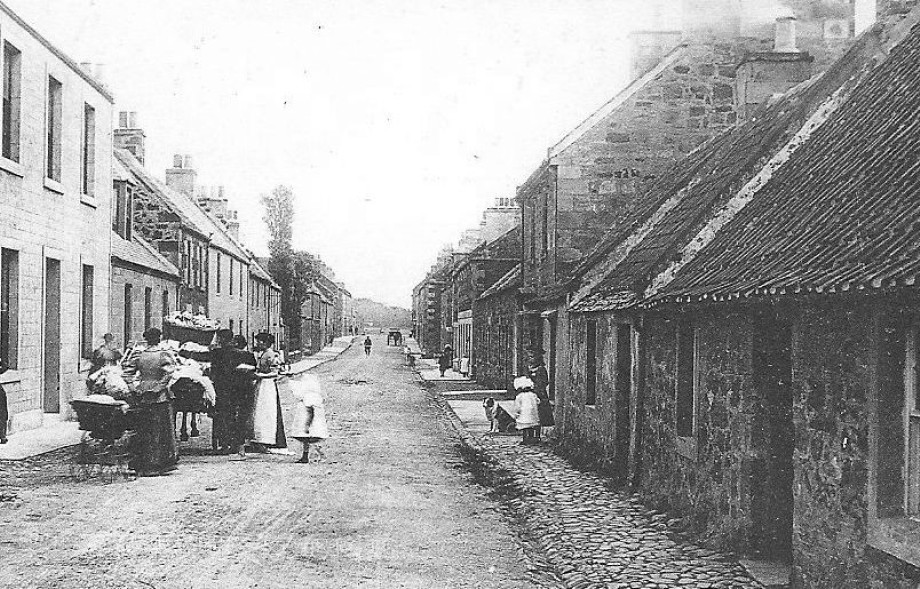 Hercules Club. Formed in 1837. A multi-activity club which had a golfing section. Its meetings were held, mostly, on Dunbarnie Links, on the coast south-west of Colinsburgh.

“A gymnastic club - The Hercules Club - having been formed here sometime ago, a general half yearly meeting took place on Saturday last the 4th inst, when the members repaired to Dunbarnie Links to compete for one of the silver golf medals belonging to the club, which after a keen competition of two rounds of the links, comprising nine holes each, Sir Ralph A. Anstruther Bart, of Balcaskie, and Mr John Wood, Banker, Colinsburgh, came in equal at 109 strokes. This being the fewest number, they played another round, when the medal was gained by Mr Wood by two strokes.

A similar club was lately formed in Elie, and a wish having been generally expressed by members of both that the two should be con-joined, they accordingly were united under the title of “ The East Of Fife Gymnastic Club” it being the purpose of the club to embrace a great variety of games and athletic exercises. The club, as so united, meets three times a year, twice on Dunbarnie Links, and once on Earlsferry Links, competing for a golf medal at each meeting.

From the liberality of Charles Halkett Craigie, of Lahill, who has given a grant of a stance for a house and garden on Dunbarnie Links, besides the privilege of playing over the links, the members have every facility afforded for practising the different games. The house is now in progress of erection, the expense of which to be defrayed by subscriptions amongst the members, and the club has now enrolled members to the number of 47, comprising almost all the landed proprietors in the neighbourhood.

After competing for the medal on Saturday, the members dined together in Mrs Ronald’s Inn, Colinsburgh, Mr Halkett Craigie, Captain of the club, in the chair, when the evening was spent with the utmost harmony and good humour. Sir Ralph Anstruther was elected Captain for the ensuing year.” (Fife Herald ) 9.11.1837)

The Second Meeting Of The Clubtakes place on Dunbarnie Links on Saturdaythe 28th current,at 12 o’clock

when the “ Hume Medal” will be competed for

“The autumn meeting of the Hercules club was held at Dunbarnie Links on Saturday 2nd, instant, when the medal presented by John Wood Esq, Banker, Colinsburgh, was played for and gained by Mr John C. Fernie of Edinburgh at 104 strokes. Before starting for the medal the competitors were handicapped, and played for sweepstakes, which were also gained by Mr Fernie. The members thereafter dined in the club-house, Charles Craigie Halket Esq, of Lahill, in the chair.” (Perth Advertiser ) 14.10.1841

“The club met on Dunbarnie Links, on the 5th current, to compete for one of the Medals. Fourteen competitors started, and after two rounds of the links, Mr John Wood, banker, Colinsburgh, was declared the winner. The members thereafter dined in Mrs Ronald’s Inn, Colinsburgh, Sir Ralph Anstruther, the Captain, presiding. George Simpson, younger of Pitcorthie, was elected captain for the next year.” (Caledonian Mercury, 13.5.1843)

Gymnastic Games are fixed to come off on Dumbarnie Links

on Friday the 26th current

To begin with rifle shooting at 12 noon

These games have now been fixed to come off on Dumbarnie Links,

on Tues 5th August, when, besides the usual prizes to be competed for,

by the Agricultural Peasantry of the district, and the amateur competition,

the following prizes will be given, and open for general competition to those from any part of the country, viz :-

The competition by members of the golf club, for the Hume Medal, will commence precisely at10 o’clock.

The rifle shooting at half past 12,and those who are to compete must each be provided with a rifle, as no borrowing of rifles willbe allowed.

The other athletic exercises will follow immediately thereafter, and those intending to compete for thePrizes mustenter their names with the secretary at Colinsburgh, at latest by Saturday the 2nd of August.

The committee have decided that only four tents for refreshments shall be admitted to the grounds, one from each of the four villages,

and they must be provided with the secretary’s card of admission..

Further particulars will appear in the handbills.

“These games came off on Dumbarnie Links on Tuesday the 5th current. The day being fine, a vast assemblage of people were on the ground to the number of six to eight thousand, and the tents pitched for refreshments, with the numerous equipages, gave the scene altogether a very imposing and gay appearance.

An excellent band, provided by the committee, was also in attendance, playing some beautiful airs as a prelude to the various competitions which took place.

The place chosen for the purpose is particularly well adapted for such a thing, the games being conducted on low ground between two low conical hills, the spectators covering the rising ground on both sides of the circle formed for the exhibition. Everything was conducted with much regularity, and in such a way to keep up the excitement for five or six hours. We observed with much pleasure the interest taken in the whole proceedings by some of the leading proprietors in the district – Colonel Lindsay, Sir Ralph Anstruther, &c, being within the ring all the time, suggesting and directing the proceedings as well as ordering additional prizes to some of the young competitors.

The district, however, is indebted in particular to one gentleman for having instituted these games, viz, Mr Lumsdain of Lathallan, who some years ago made the suggestion and offered £5 for prizes to the agricultural peasantry – a meritorious class, and well entitled to a holiday of this kind ; and being followed up by all the landed proprietors as well as the tenantry the meeting has grown up to the importance it now possesses.

The Hercules Golf Club met at 10 o’clock to play for the Hume medal, when 18 competitors started, and after two rounds of the links, scores were counted, when Mr William Clark, Hallhead, and Mr Martin, Edinburgh, were found to be equal, Mr Wood, Banker, Colinsburgh, being third on the list. Mr Martin and Mr Clark having played another round, the former was declared the holder of the medal.

At one o’clock the other games commenced with rifle shooting, 15 competitors, the first prize being awarded to Captain Loyd Anstruther, the second to Colonel Moncreiff.

Those taking an interest in these games are much indebted to Mr Brown, the tenant of the links, who has from time to time liberally granted permission to hold the games there.” (FH 15.8.1845)

“The meeting for the gymnastic games and Hercules golf club competition for the Schiehallion medal, presented to the club by Captain Campbell, St Andrews, came off on Dumbarnie Links on Wednesday the 12th curt. The golf competition commenced the proceedings, and after a spirited contest of two rounds of the links, the medal was gained by Mr John Clark, Warmiston, at 105 strokes. The members, after partaking of a cold collation in the golf-house, proceeded to the gymnastic arena, where arrangements, under the active superintendence of the secretary, had been made for the athletic exercises. This romantic spot, situated on a level piece of ground between two grassy hillocks, forming a complete amphitheatre, was crowded by a numerous and gay assemblage, amounting to about four thousand. The effect was most imposing – tier above tier occupying the rising ground in varied holiday attire. The weather was most propitious, and the inspiring strains of the band from Kirkland Works combined to cheer and gratify all parties. On no former occasion were the various exercises better competed.”

“The second meeting for the season was held on Dumbarnie Links on the 13th current, when the “Schiehallion” medal was played for, and won by the champion of Leven Links, David Wallace, Esq., at ninety seven strokes of two rounds.” (CM 19.7.1849

“A meeting of the Hercules golf club will be held at the golf-house, Dumbarnie, on Saturday the 17th inst. at 12 o’clock, noon, for the purpose of electing new members and any other business that may be brought before the meeting. Immediately thereafter, the medal belonging to the club will be played for.” (FH 18.9.1870)

“Details of the once famous Dunbarnie, or Colinsburgh, golf club have been recently unearthed. It is believed to have been founded about 1837, but when it died is uncertain – anyway, before 1867, the date of the “ Golfers Year Book.” It is believed that the last members were Rintoul of Lahill, Morgan of Coats, and John Flockhart, Banker, Colinsburgh.

It was of the nature of an athletic society, and the golfing section is now represented by the flourishing Elie Golf House Club, and the curling by the Hercules who play on Kilconquhar Loch.

The above statement that the club folded before 1867 is incorrect as our last extract dated 1870 shows. This was a multi-activity club, with a golfing section with a very distinguished and privileged membership, so it is quite understandable why it would not have appeared  in “Golfers Year Book” in 1867. Further, if, as stated, “the golfing section is now represented by the flourishing Elie Golf House Club,” the 1870 activity is nearer to the founding of the Golf House Club in 1875. However, as yet, we have been unable to determine precisely when the club did close.

Some of the articles call it Dunbarnie and some Dumbarnie. Modern usage is the latter.