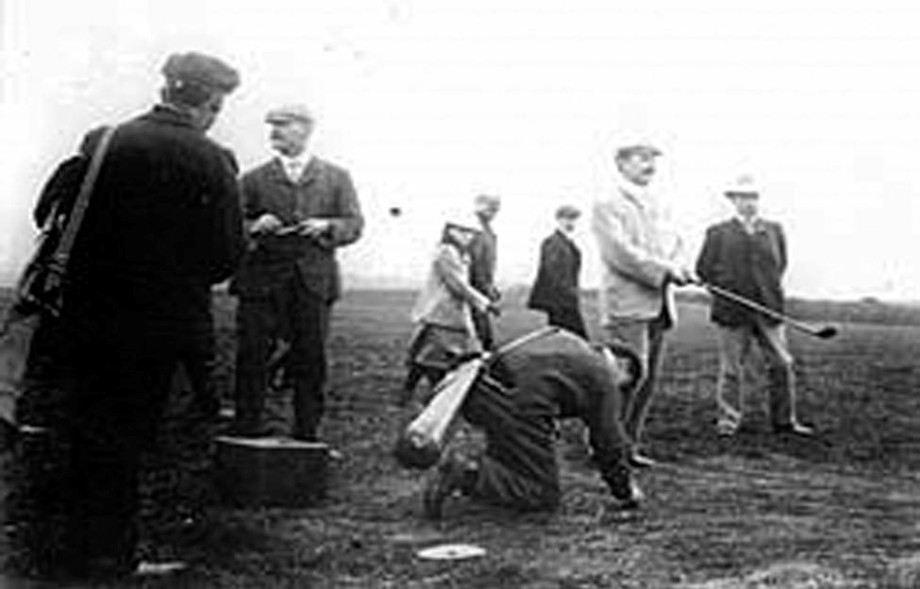 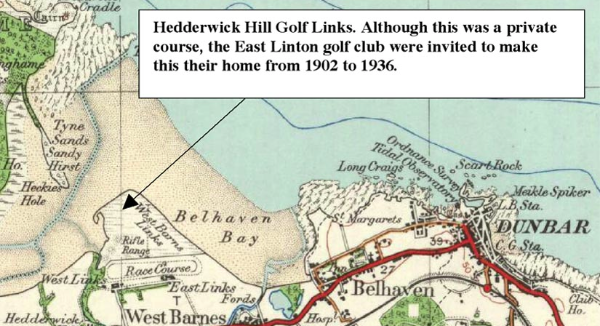 Hedderwick Hill Golf Course. Laid out 1896. “The Hedderwick Hill golf course (sometimes Hedderwick golf course) was located on West Barns Links, about a mile west of Dunbar.. Golf is recorded on West Barns Links as far back as 1794 when an organisation calling itself The Dunbar Golf Society played there. Nothing has ever been heard of the Society since that date. Hedderwick Hill golf course dates from just after 1896. In this year St Clair Cunningham, an enthusiastic golfer and member of the Honourable Company, took a farm lease at Hedderwick Hill and laid out his own course. Cunningham had married an heiress to the wealthy Usher family of whisky-blenders and brewers. The first recorded visit by any golfers was by the East Lothian club in June 1897 and shortly after East Linton Golf Club were granted the courtesy of the course for their competitions. The ELGC had hitherto played elsewhere but continued at Hedderwick Hill till 1937. Numerous other golf clubs, including Dunbar Castle GC, Dirleton Castle GC, the West Mayfield GC and the Watsonian Club also visited. The ground was inspected by the Honourable Company of Edinburgh Golfers as a possible location for their course before opting for Muirfield. Latterly the property was owned by Sinclair Cunningham.

By the courtesy of Mr St Clair Cunningham, some Edinburgh golfers recently held a competition over the charming little course at Hedderwick, situated on the shores of the firth of Forth, two miles or so to the west of Dunbar. The air is bracing, and there is a refreshing breeze during the hottest day. The course abounds in natural hazards, and is of a thoroughly sporting character. The putting greens are carefully looked after, and bad lies are few and far between. A number of the greens can be reached from the tee. A dyke guards the first hole, which the player should negotiate with his second shot, and get down in a par 5. The next four holes are devoid of any serious difficulties, but going to the sixth the player has to face a formidable bunker on rising ground, and surrounded by bent. A well lofted ball straight on the guiding post should land on the putting green – which is bowl shaped – and make a 3 quite possible. Keeping clear of all obstacles, the normal scratch player should reach the turn in an average of 4. Perhaps no golf course in the universe can boast of a green on an island such as is to be seen at Hedderwick. In size it is not much bigger than an ordinary sized putting green, and it’s putting green is only about seven feet in circumference, and to reach it from the tee requires only a half iron shot. A “ foozle “ means a difficult recovery from a sandy beach. A good drive from the Island in another direction takes you back to the course again. The remaining holes homeward are of a varied and interesting character.” (S 2.6.1903)

Many famous golfers also visited the course, including local MPs, the Edinburgh intelligentsia and famed players such as Ben Sayers and Maud Titterton, the 1908 British Ladies’ Champion. In 1912, Open Champion James Braid, created great excitement by playing the 18-hole course in just 57 strokes, probably a world low-score record for the time. The course had some interesting feature holes, including the Island Hole, lying just offshore and the Bunker Hole, which required the ball to clear a huge, natural bunker.

Tragically, in 1906 St Clair Cunningham died from pneumonia, brought on after having played golf in the rain at nearby Gullane, he was just 48. His widow, Elizabeth Usher Cunningham decided to keep up the golf course until the First World War (1914-1918) resulted in disruptions from military manoeuvres across the dune land.

After the war the course took some years to recover, but by the early 1920s golf was recommenced. In 1924, another local club to be granted the courtesy of the course was West Barns Golf Club and Mrs Usher appointed a local man Will Kerr, to add the greenkeeping work to his farm duties. Finally by 1937, Elizabeth Usher and one of her farmer sons, Alan Cunningham, decided they would no longer support the upkeep of the course and announced its closure. The East Linton Golf Club decamped in 1946 to the current Dunbar golf course (they are required to be Dunbar Golf Club members) and the West Barns Golf Club effectively ceased in 1937.

Sadly the dunes that the Hedderwick Hill course lay upon, known as Young’s Knowe, were excavated and removed in the 1960s for glass manufacture. The levelled land was then planted with straight regiments of conifer trees which blanket the land today. Not a trace remains of the former course.