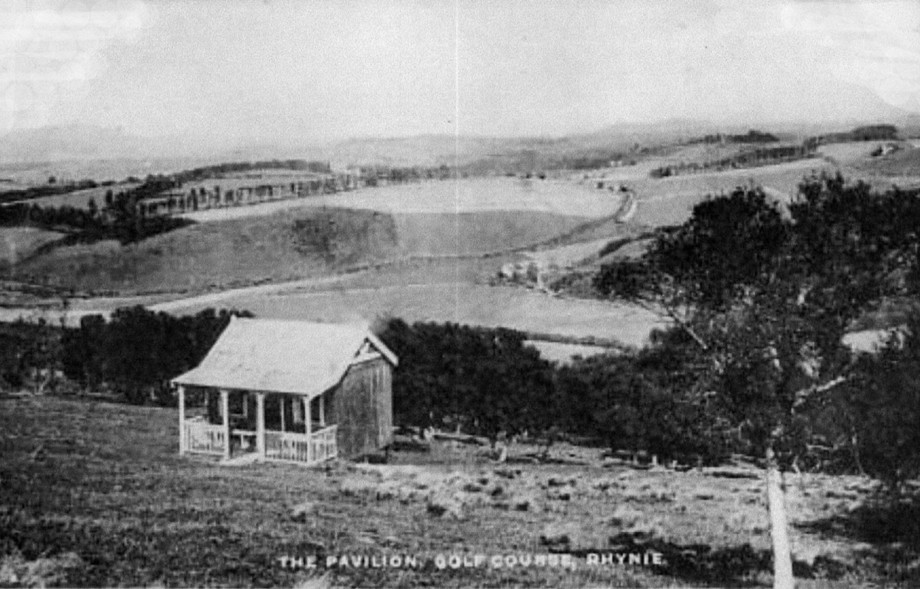 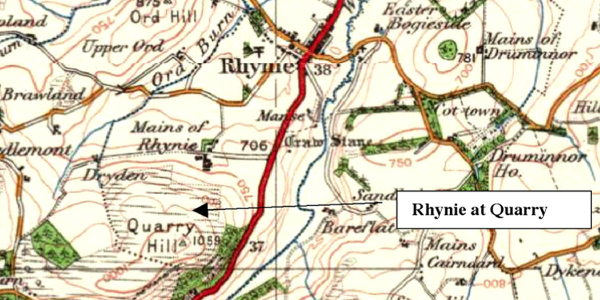 “The latest, and by far the most important undertaking to popularise the village and district is a 9-hole golf course. Efforts were put forward some years ago to secure the lease of the Quarry Hill for the purpose of laying out a golf course on it, the nature of the ground being regarded by experts as ideal for the game, but difficulties of possession and tenure could not then be overcome. Time, however, has fortunately smoothed these difficulties, and the Committee formed last autumn arrived not only at a satisfactory, but a favourable agreement with the proprietor, The Duke of Richmond and Gordon, and with Mr Thomas Mackie, the tenant of the Mains of Rhynie, on whose farm the hill is included. The course as stated, is one of nine holes, and the ground was surveyed and the greens and tees laid out under the supervision of Mr Marling, of Messrs Marling and Smith, Golf Professionals, Aberdeen.

Access to the course is by way of the New Quarry Road, about a mile from the village. A winding path of from 200 to 300 yards through the beautiful birch wood leads to the pavilion, which is under construction by Mr John Souter, Inch. The building, when completed, will afford every convenience golfers desire. Driving from the first tee players will find the fairway almost perfect. The length of the hole is 120 yards. The second hole (350 yards) will provide first-class sport, and the three following – which are respectively 250, 220, and 129 yards in length – have each their distinctive features. No 6 (430 yards) is perhaps the most difficult hole. No 7 is 330 yards in length, and No 8 150 yards. The last hole, the length of which is 250 yards, is 1050 feet above sea level, and lies just above the starting point. An extensive and grand view of the surrounding country is obtained from this altitude – The Tap o’ North on one side, with Bennachie, the Grampians, Mount Keen, Morven, and the Buck of Cabrach all prominently in view.

Financially the undertaking has received generous support from natives and friends of Rhynie. The secretarial and various other duties have been handled by Mr Shepherd,MA, with that enthusiasm which brings such a venture to a success. Although the village of Lumsden lies about 3 miles beyond the course, residents will be conveniently and well served. So far, the management of the affairs has been confined to Rhynie, but Lumsden residents are invited to co-operate in the management and control of the club. Equal facilities are offered to them, and their support and interest will ensure the maintenance of the club for mutual benefit. The course will be formally opened in a few weeks time.”

Clearly, the negotiations between the two villages were successful, resulting in a joint venture.

“The new nine-hole course of the Rhynie and Lumsden Golf Club, on Quarry Hill, between the two villages, was formally opened yesterday afternoon by Mr William Penny Craik of Craig Castle, President of the club. He was accompanied by Mrs Penny Craik, who drove the first ball, and was presented with a golf club and ball, suitably inscribed, as a souvenir of the occasion. There was a large attendance at the opening, and a match was played between the visitors and members. The course commands an expansive view of Lochnagar, Morven, and Mount Keen. The course is 2500 yards long, and the highest hole is 1059 feet above sea level. The ground is on the estate of the Duke of Richmond and Gordon, and the course was laid out under the supervision of Messrs Marling and Smith, professional golfers, Aberdeen.”

The course fell into disuse and the club disbanded during WW1. Golf returned after the war – see Lumsden GC. 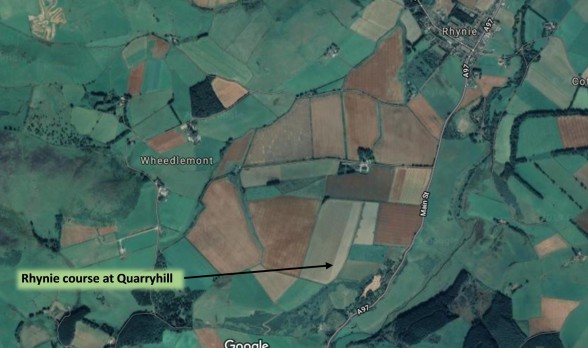