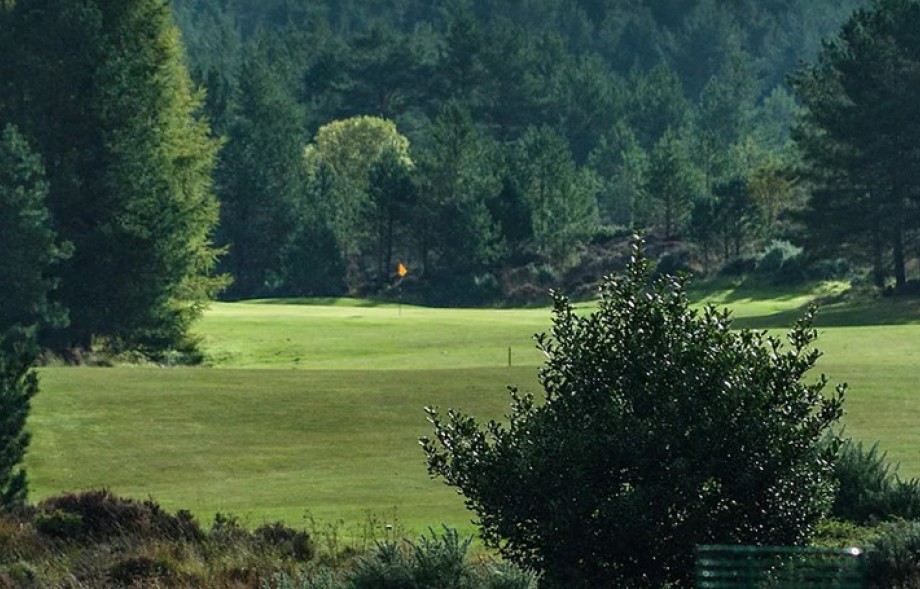 Bonar-Bridge New Golf Club :-  On Saturday a new nine-hole course was formally opened by Mrs Andrew Carnegie, Skibo Castle in presence of a large assemblage, including delegates from other clubs in Ross and Sutherland, Dr Macrae, convener, in his introductory speech, described the origin and growth of the club. Mr D. Sutherland, M.A. secretary, led Mrs Carnegie to the tee, where she played off the ball, and in an interesting speech declared the course open.  Mr Andrew Carnegie also spoke. Mr John Macleod Ardgay, presented Mrs Carnegie with a silver-mounted and suitably inscribed club as a memento of the occasion.  Mrs Carnegie replied. Mr Sutherland proposed thanks to the delegates from other clubs, which was replied to by Mr Munro, solicitor, Tain.

Ardgay :-  Proposed Golf Course -  On Monday, Mr Alex Machardie, Inverness, who is a well known expert in the laying out and arranging of golf course, came to Bonar Bridge by invitation with the view of examining the proposed site at Migdale.  He was accompanied by Mr D Shaw, Mr J A Polson, Mr D. Sutherland,M.A. and Mr Ken. Mackay. The result of the consultation shows that the site would be an ideal one for a golf course, but the laying of it out would cost a great deal of expense.  A golf course in this district, however, would prove a great boom.

Ardgay :- Formation of a Golf Club for some time back a movement has been on foot to start a golf club in this quarter, which is now as famous for its invigorating climate as for its natural scenic charms.  On Monday night a largely attended public meeting was held in the Carnegie Free Library.  Mr David Sutherland M.A. head master of the Public School, lucidly explained the objects of the meeting and the aims of the club. Mr Kenneth Mackay, Old Post Office Buildings, gave a detailed account of the origin growth, and success of the scheme, quoting frequently from correspondence he had had from influential parties who were interested in its success.  The meeting was unanimous in resolving to adopt the proposals submitted, and a large managing committee was appointed, with Dr Macrae, Bonar, as convener, and Mr D Sutherland. M.A. is secretary.

As reported in the Northern Times – September 29th 1904

On Saturday last, in ideal weather, the new nine hole course made during the past summer on the Bonar old market stance to the west of Loch Migdale, was formally opened by Mrs Carnegie of Skibo, who was accompanied by Mr Carnegie, their daughter and a party from Skibo Castle.

The course is situated among grand scenery. Loch Migdale down below to the south east, surrounded with wooded heights forms a panoramic scene rarely surpassed, with which, in pleasing contrast, blend the more barren and rugged heights to the north, while the south can seem the sinuous channel of the Kyle of Sutherland, with magnificent mountains of Ross beyond. Here on the Bonar-Ardgay course the votary of the Royal and ancient game can disport himself, inhaling the purest mountain air and the purest ozone from the sea, and what more does one require? He is in these days of universal golf so fastidious that every inch of the ground over which he plays must be perfect. In fact, he wants golf made easy. We do not say that he can get his ideal in this new course but, if not yet, he will in the course of a very few years, for the course is capable, with labour and attention, and constant play, of being one of the best nine-hole courses in the country.

Dr MacRae introducing Mrs Carnegie, said – Mrs Carnegie, ladies and gentlemen, before asking you formally Mrs. Carnegie, to declare the golf course open, perhaps you will permit me to make a few remarks regarding the steps that were taken which led up to the formation of a golf course here. For some time back a feeling existed among many of us here that this district sadly lacked the means of affording opportunities, especially young people, of enjoying good healthy, outdoor recreation. A golf course, it was thought, would be a very good way of making a start to rectify this state of matters, seeing it could be taken advantage of by persons of almost all ages and both sexes. Accordingly, last year a few gentlemen, who have the welfare of the community at heart, discussed the matter in an informal way with the neighbouring proprietors, shooting tenants, and others in the district. Their suggestion met with such favourable promises of support that a public meeting was called in April of this year, and a Golf Course Formation Committee appointed.  Our first step was to approach the Skibo estate management to endeavour to secure the market stance and adjoining field, as being the most suitable piece of ground in the locality for the purpose of a golf course.  Mr Hardie did everything in his power to help and further our object, and for this we heartily thank him. We have also to thank Mrs Murray and Mrs Matheson, for the favourable manner in which they met us. Through the exertions of our secretary, Mr Sutherland, and the kind liberality of our neighbours, we soon collected a fairly good sum of money. We then approached, as the people of Bonar Bridge have done on more than one occasion, and with our usual good faith in him, our landlord, Mr Carnegie. Mr Carnegie, carrying out his universally known principle of helping those who help themselves, doubled the sum we had collected. We most sincerely and gratefully thank Mr Carnegie for his handsome gift; for through his generous liberality we have the satisfaction of knowing that we are handing over the golf course to the Golf Club free of debt. (applause)

Having thus a goodly sum of money in our possession, we lost no time in setting the necessary work agoing, and towards the end of July the course was completed as you now see it. I may say that during the time the work was carried on, the weather, although in many respects ideal, was far from being suitable weather for the making of good greens. However, time should remedy this effect. Perhaps our friends, who are in the habit of playing over first class courses, may not think much of ours, but we, although we are fully aware that it is far from being a first class course, are fully satisfied with it at present, and will do all we can in the future to improve and extend it. Of course there are a good many things yet to be done in connection with it, such as the erection of a clubhouse, & c, but I feel sure they will. I am afraid i have detained you to long with my remarks, and now, Mrs Carnegie, on behalf of the Committee, I thank you most heartily for your kindness in coming here today and honouring this function with you presence. I have much pleasure in asking you to declare open the Bonar Bridge – Ardgay Golf Course. (applause)

Mrs Carnegie, in reply, said that there was now a great future for Bonar with this golf course and the beautiful surroundings. No game had done more for, and no recreation is more suited to and taken advantage of, for the benefits of mankind than golf, which was engaged in all over the world from America to Japan. It was a recreation which could be engaged in with delight and pleasure, and not often attended with danger to life and limb. She congratulated the Bonar people in the acquisition of the course, and she was sure that all would join with her that it will be a means of bringing the fullest measure of prosperity and enjoyment for the district. (applause)

Mrs. Carnegie thereafter most deliberately drove off the first ball from the tee, which was a capital shot, being a drive of 96 yards.

Mr Macleod then, in the name of the club, presented a beautiful wooden putter, made by Auchterlonie, St Andrews, mounted with silver band on which a suitable inscription. Mrs. Carnegie expressed her thanks.

Mr Sutherland, secretary, expressed the thanks of the club to the representatives of the Brora, Golspie and Tain clubs who attended by invitation, and Mr Munro, captain of the Tain club, on behalf of the visitors, responded.

Mr Carnegie was the called upon to make a few remarks and said he did not think it was necessary for him to say much as Mrs Carnegie was fast eclipsing him in the art of oratory, and not only him but Mr Ritchie. She is fast gaining an oratorical reputation over both of us. I congratulate the people of Bonar on their new course. It is a great pleasure for Mrs. Carnegie and myself to see such a healthful recreation taking place among the community, and we do hope they will derive great benefit from it. The Bonar Club have done the right thing, and they have the correct course, for a nine hole course is the correct thing, and i will prove it to you.  His Majesty the King has a nine hole course in Windsor and there is a nine hole course at Skibo, and when the King and Mr Carnegie have a nine hole course only, it shows it is the right thing.(laughter) Golf was introduced into America by a friend of mine, and he was from Dunfermline-(laughter)-and the best player on the St Andrews course in America is a friend of mine, and he was from Dunfermline-(laughter)- and one more thing I must tell you, the member with the largest handicap of that club is also from Dunfermline.(great laughter). And now, what next? Is it a church? I think not. We have more churches than we can fill. I think the next thing you should ask for is a Royal Charter for Bonar, I am sure his Majesty would readily grant it. (applause)

A new nine-hole golf course was formally opened on Saturday by Mrs Andrew Carnegie, Skibo Castle.  There was a goodly crowd of spectators, including delegates from other clubs in Ross and Sutherland.  Mrs Carnegie drove off the first ball and declared the course open.  Mr John Maclead, Ardgay, presented Mrs Carnegie with a silvermounted clubs as a memento of the occasion.