Killin Golf Club - 1. Instituted 1901. “The charming highland village of Killin, at the head of Loch Tay, desirous of coming into line with many other tourist centres, recently had laid out a fine 9-hole course at the farm of Finlarig, five minutes walk from the village and railway station. The course is admirably situated and the turf is very tough and with a fine surface. The greens are in exceptionally good order and have almost been quite naturally formed. The opening ceremony took place on Friday evening, when a large crowd assembled. Mr. J. D. McRae, the Captain, mentioned that the course had been primarily constructed in the interests of the house-letters of Killin, and near neighbourhood, who has guaranteed the greater part of the cost of maintenance for the first five years. Mr. J. W. Todd, Mornish Lodge, formally declared the course open and hoped it might prove a great boon to the village. A game then started, when Mrs. Mitchell, who was the partner of Mr. Steven, struck the first ball amidst a burst of cheering. The first foursome comprised Mrs. Mitchell and Mr. Steven v. Mr. J. D. M'Rae and Mr. M'Gregor. The latter couple won by two holes.” (Scotsman 16.6.1902)

In the event, funds were not maintained and the course closed in 1905. 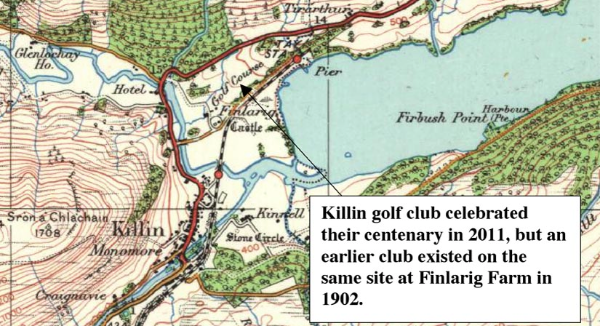