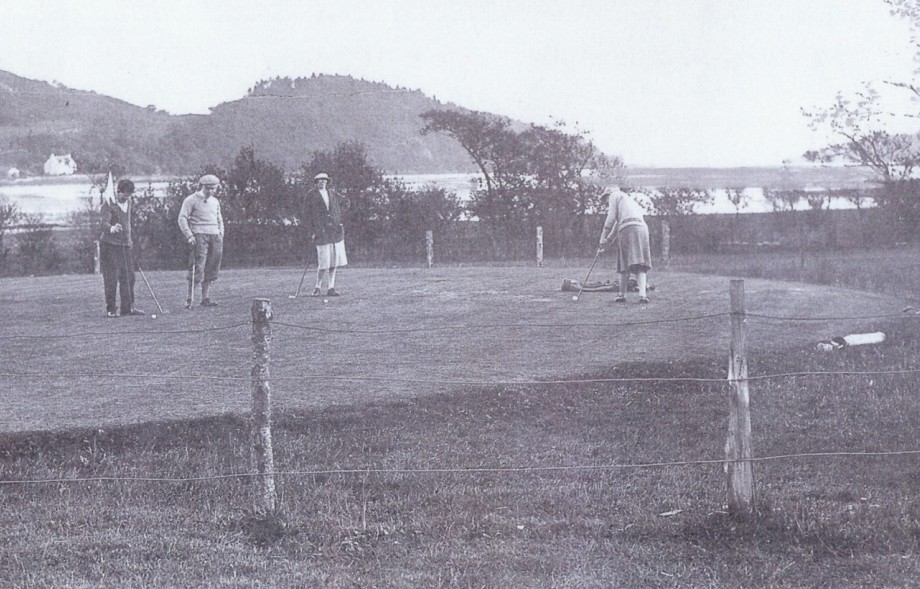 Tarbert Golf Club.  Instituted 1898.  Tarbert had two courses before the current course. The first, a 9-hole course on the Stonefield estate, alongside the shore of Loch Fyne, fifteen minutes walk from the centre of the village, from 1898 until 1906. The second was to the east of the town Overlooking East Loch Tarbert. It was replaced by the current course, which opened in the 1930’s. 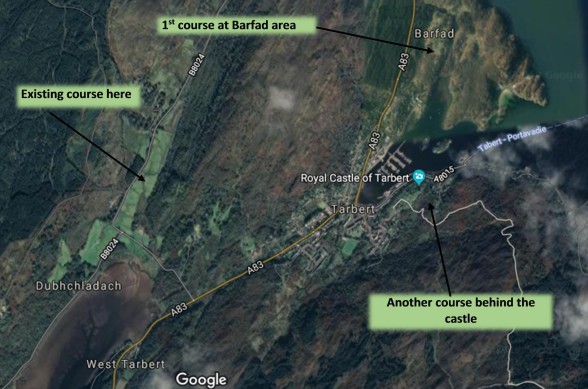 “The ground is limited in extent but it has been utilised in a manner that will test the ability of more than the average golfer.  The turf throughout is of the best moorland quality, and at this season of exceptional growth it is by no means heavy.  The putting greens are to the small size but will eventually be enlarged to the regulation size.  They are mostly natural.  The course, laid out by Willie Fernie, will prove a boon to the residents and visitors, and already the club membership numbers upwards of 50.  The club is mainly indebted to the young Laird of Stonefield, who has willingly placed part of his estate at their disposal, and to those who know the configuration of the ground in the vicinity of the benefit conferred is beyond estimate.”

“What promises one of the best inland courses in the country was opened yesterday at Tarbert by Lady Ileene Campbell of Stonefield, in the presence of a representative gathering of golfers and the general public. Mr Airs, the secretary of the club, presented Lady Ileene with a golf club, and in requesting her to open the course referred to the active interest which her Ladyship and Mr Campbell took in all athletic matters, and in everything concerning the interest of Tarbert. Lady Ileene replied very gracefully, and afterwards drove the first ball and declared the course open. A match was played between Tarbert and Lochgilphead players. The play was pretty much one-sided, the result being: as follows

At the close of the match the visitors were hospitably entertained in the Columba Hotel, Captain Campbell of Stonefield in the Chair.” (S 1898)

“An interesting move is afoot at Tarbert for the laying out of a golf course, and negotiations are in progress for the acquisition of suitable ground. A number of local gentlemen interested in the welfare of the town have raised the necessary financial guarantee for a ten year’s lease of a stretch of land belonging to Colonel Campbell of Stonefield, and they are hopeful of completing the arrangements.”

“We understand that the proposal to lay off a nine-hole golf course for Tarbert, which was under consideration a year ago, is now taking definite shape. At the request of Colonel Campbell of Stonefield, who has all along taken a warm interest in the undertaking in view of the benefit it will confer on the village, Mr W Todd, Architect, Lochgilphead, visited Tarbert on Monday, and along with Mr James Carmichael, Contractor, went over the ground and pegged out the greens &c. The contractor has now started work, and the course will be in good condition for play early next year. The course is situated on the hill behind the houses between the pier and the village, and in a few years time, with regular attention, it will undoubtedly become one of the best sporting courses in the West of Scotland, while it will also have the advantage of being conveniently near the village. Although it is intended to form nine greens meantime, the idea is ultimately to extend it to eighteen holes. The undertaking is at present being carried out by Colonel Campbell himself, but no doubt a club will shortly be formed to take over the course.”

“Good progress is being mad in the laying out of the golf course, the contractor (Mr Carmichael) having reached the stage of turfing the greens.  The following gentlemen have been appointed as the Club Committee: Captain Webber, Messrs J E MacArthur, J E M Graham, and J S Cavalier.”

“Marked progress has been made in the laying out of the nine-hole course at Tarbert. The greenkeepers have been hard at work during the past few months in order to have everything in splendid order for the opening of the course at the beginning of June. Situated conveniently to the pier, it will be possible for one-day visitors during the summer season to enjoy a round, while the course will form a strong attraction for longer-date visitors to this favourite resort. Mr Ainsworth, the county MP, has presented a medal for competition.”

“On Monday the new nine-hole golf course was opened under very favourable conditions. There was a good turnout of club members to take part in the competition for the Ainsworth Medal. The winner was Mr J S Cavalier with 100(9)-91; followed by Captain H H Webber (Scratch) 94; and Rev J M Menzies (Scratch) 94.“

“The new golf course is proving an attraction alike to residents and visitors. The bogey for the eighteen holes is 82 and one of the best efforts to equalise this score was made last week by Mr A D Robertson, winner of the Challenge Shield and Gold Medal on Oban course. Mr Robertson did the round in 84 and, but for getting into difficulties at one of the holes would have defeated bogey. Colonel Brooke, the Captain, has presented a handsome medal to the club for competition and the committee intend offering prizes to be competed of by the visitors”

“In the visitors’ handicap stroke competition, which took place on Friday, Mr John Mitchell was the winner with a score of 92 (5) 87. The members’ monthly medal competition was won by the Rev Alexander McKinnon, BD, with a score of 85.”  (CC 1.8.1908).

Local memory records that it started at the Columba Hotel and finished at the Tarbert Hotel, ideal for the thirsty golfer. It is not known for how long it existed.

The club appears in the Golfing Annuals until 1914 but is not in 1916 or thereafter, so it must be assumed that it closed with the onset of WW1. 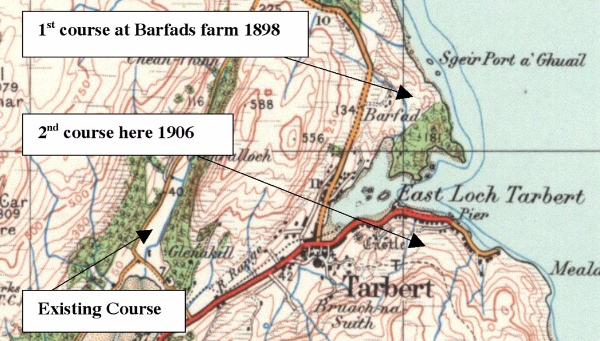