““A public meeting was held in the public hall on Saturday evening to consider the advisability of forming a golf course. H. Seton Karr, Esq of Kippilaw, M.P., presided over a representative attendance. Amongst those present were:- Mr and Mrs Laidlaw, Kippilaw House; Miss Riddell Carre, Cavers Carr; Sheriff and Mrs Boyd, Glasgow; Revs. Messrs Burr and McArthur; Mr and Mrs Dodds, Schoolhouse.

Mr Seton Karr, an expert at the game, spoke at length as to the formation of a course and the benefit it would be to the villagers, not only as a healthy and exciting exercise, but as an attraction to summer visitors. Sheriff Boyd, who has been the bright star in the movement, stated what had been done previous to the meeting, and the investigations which had been made.

Mr Duncan, Edinburgh, who has had large experience in laying out golf courses had gone over The Common, the ground proposed for the course-which was, in his opinion, very suitable for a nine hole course. The expense of laying out the course was estimated at about £40, and a further sum of £12 a year would be required for upkeep. A resolution was unanimously passed for the formation of a course on the above footing. The former sum will be raised by voluntary subscriptions. A large committee of Ladies and Gentlemen were appointed to carry out the arrangements.:    (SR 25.4.1901) 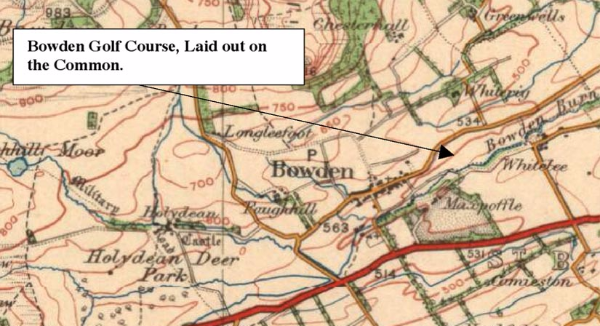 “Saturday will be long remembered as a red letter day for the village of Bowden, as the proceedings in connection with the opening of the new golf course were of a very unique description. The movement to form the course for the village had often been thought of, and it is due to a few Ladies and Gentlemen that the villagers can now boast of a golf club.

A public meeting, to hear the opinion of the villagers and others on the advisability to form a course, was held early in April last. H. Seton Karr, Esq., M.P., an enthusiastic golfer, presided at this meeting, and Sheriff Boyd set forward a practical view of the movement proposed. He said that the common, the ground intended for the course, had been visited by Mr Duncan, Edinburgh, an expert, and that he (Mr Duncan) was of the opinion that this was a desirable place to lay out a course. After due consideration by the meeting, various points being vigorously discussed, the motion to form a course and establish a club was unanimously carried.

A further meeting was held on the 27th April, when the collectors reported that they had received subscriptions amounting to upwards of £60, and also had been promised about £10 towards the three years guarantee fund for upkeep, which was set down at £12. After this gratifying financial result, it was resolved to proceed with the work without further delay. Mrs Laidlaw, Sheriff Boyd, Rev J. Burr, Mr Tress, and Mr Grieve were appointed green and management committee to supervise the transformation of the common into golf links. It may be here mentioned that the common is land belonging the feuars of Bowden, stretching from the village in a northerly direction towards the Eildon Hills, and thereafter to the west till it joins the  Melrose Road.

A walk round the course is in itself a very pleasant experience and a beautiful view is obtained of the Cheviots and round into Berwickshire. The course is a nine hole one, and has been very skilfully laid out. It is rather narrow at places, but with skilled players this difficulty will be easily surmounted. The season being so far advanced the putting greens were left in their natural state, and are extremely good. Much credit is due to Mr Tress for the work being done so expeditiously, as he has given it his close attention.

Sheriff Boyd welcomed the President, Mr Seton Karr, who had travelled from London especially that morning to open the course. Sheriff Boyd said that it was very satisfactory to state that they had a balance of £15 on hand. The course would not only be source of enjoyment to the villagers, but also to the many visitors. Sheriff Boyd then called upon Mrs Laidlaw to present Mr Seton Karr with a driver, a duty in which she pleasantly performed in a neat speech.

Mr Seton Karr said he was pleased to be present, and to do all that was in his power for the village and district with which he was connected. The course would greatly enhance the amenity of the place, and be a source of pleasure to the inhabitants. He referred to the interest taken in the club by Mr Tress, Sheriff Boyd, and Mr and Mrs Laidlaw, and specially to the latter’s activity and energy. He also read a letter from the Earl of Dalkeith, apologising for not being present, and expressing the wish that the club might prove a success, and stating that he was willing to become a Vice President.