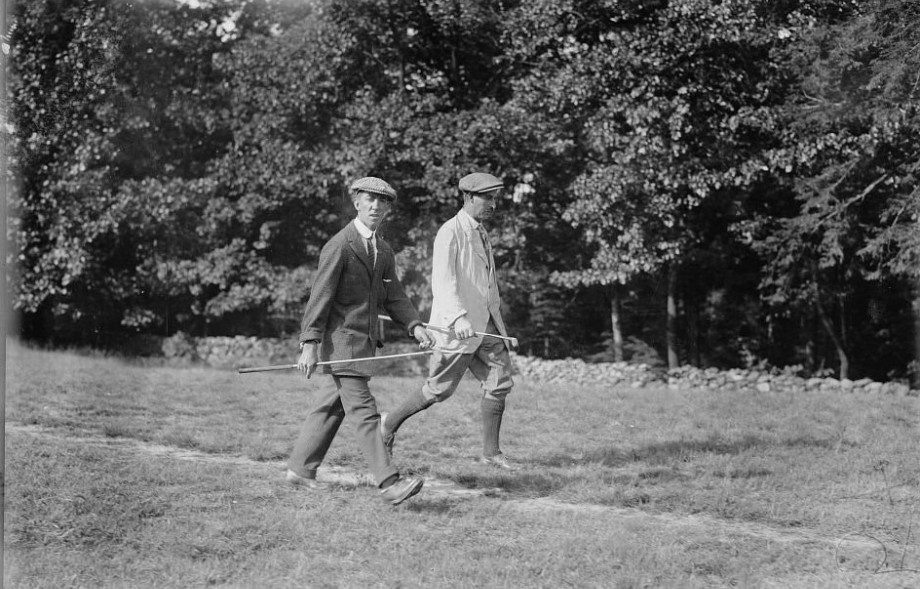 McLeod and Vardon at Blantyre 1916

Blantyre Golf Club. Instituted 1913. A 9-hole course, laid out by James Adams, at Auchinraith Braes, on land attached to Auchinraith Colliery beyond the Auchinraith Branch railway line. The colliery suffered a mining explosion in 1930, and its site is now an Industrial Estate. The site of the course was acquired by the local Council for housing and the site of the old clubhouse is now 32/34 Springwell Crescent. 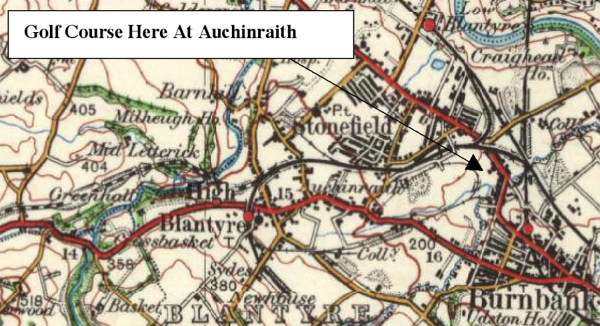 “A public meeting of Blantyre golf club was held on Tuesday evening last in Livingstone Memorial Church Hall, Mr John Welsh, presiding. The attendance was somewhat disappointing, but what it lacked in numbers was made up on enthusiasm. A report of three different grounds suitable for golf, and which the proprietors were willing to let for that purpose, prepared by Mr Tom McCluskey was read. A full and true discussion thereafter was taken part in by all present, and eventually it was resolved that provided the ladies and gentlemen who had already agreed to become members were still agreeable to continue as members, the ground situated at Auchinraith, belonging to Messrs Merry & Cunningham would be taken. A committee was thereafter appointed to interview the members and report at a meeting on Monday evening first when, if, reports are favourable, the scheme will be gone on with at once, and it is hoped that in the course of a very short time golf will be the vogue in Blantyre. As it is intended to restrict the membership in the meantime, it is hoped that everyone who has already signed their name as a member, will see that it is on the new list, as after Monday night entry money will be charged in addition to the yearly subscription, which is fixed at a guinea for gentlemen and half a guinea for ladies. Payments were accepted at the Commercial Bank, Blantyre or directly to the treasurer Mr William McGruther” (HA 15.2.1913).

“A meeting of the above club was held in the Livingstone Memorial Church Hall on Monday evening. Mr John Welsh presided over a fair attendance, when a report of the number of members who had affixed their signatures to the sheets as intending members was submitted, showing that over sixty gentlemen and forty ladies had done so. It was agreed that the ground belonging to Messrs Merry & Cunningham, Ltd, be secured for the course.

“A meeting of the committee was held in the Livingstone Memorial Hall on Monday evening last. Rev. C. Scimgeour Turnbull, President, presided over a full attendance. It was decided to engage Mr David Adams, Royal Exchange Square, Glasgow, the well-known expert to lay off the ground, and various other incidental matters were discussed. A further list of new members was submitted.

We understand Mr Adams visited Blantyre on Wednesday and went over the ground with the green committee. He expressed his opinion that the ground selected was entirely suitable for a golf course, and when completed will stand comparison with ant inland nine-hole course round about. Mr Adams pegged off the ground to good advantage, and the greenkeeper will start operations some time next week. It is expected the course will be in playing order at the beginning of April, and it must be said that the prospects of a successful golf club in Blantyre now seem very bright.” (HA 1.3.1913)

“On Wednesday afternoon the new nine-hole course which has been laid out on the Auchinraith Braes, on ground belonging to Messrs Merry & Cunninghame (Limited) was formally opened in presence of a large and representative company of ladies and gentlemen. The weather was fine, and the greens, considering the short time it is since work was first commenced, looked in excellent condition. Over 60 members were in attendance.

The President, Rev. C.S. Turnbull, M.A., at the outset of a few introductory remarks, thanked the members of the club for the honour they had done him in appointing him President. He was only one, but any little thing he could do would be done gladly. Mr Turnbull expressed the hope that the golf club would supply a long felt want in the parish, and that many would take advantage of the opportunity now provided and become members. He thereafter called upon Mr John Menzies.

Mr Menzies said he was pleased to be there that day, and he thanked the members for the high honour they had conferred upon him in asking him to open the course. Mr Menzies afterwards related the steps which had been taken to secure suitable ground. He had been largely instrumental in getting possession of that field for a nominal rental, and he was sure the club would retain it as long as Merry & Cunninghame held the lease, and he thought that would be a long time yet. Regarding the game of golf, he knew very little. Some of his personal friends were, however, golfers, and from what he could learn from them the game was a good one and a very healthy one. If the club was going to make the weak strong, and the healthy more vigorous, then the starting of it was justified, and anything he had done to secure that end would be more than compensated. Mr Menzies also congratulated the members of having erected such a handsome pavilion in the short time since the club was formed, and he hoped in the wet evenings this would be a place where members could retire to and have happy conversations.

He had great pleasure in being present, and in declaring the course open he hoped the club would meet with every success.

Mr Menzies thereafter asked Miss Clark Forrest of Woodhouse to open the door of the new pavilion, which this lady did amidst cheers.

Mrs Thomas McCluskey, wife of the Captain of the club, was next called upon to drive off the first ball, and in doing so her effort was an extremely creditable one and was heartily applauded.

Remarks were afterwards made by the Rev. Thomas Pryde and on the call of Mr A.W. Hendry, Mr John Adams and the Rev Father O’Hanlon, vote of thanks were awarded  to all who had assisted in the ceremonies. Tea was then served by the ladies after which a match between sides representing the Captain and President took place, with Captain team winning by 7 matches to 6. 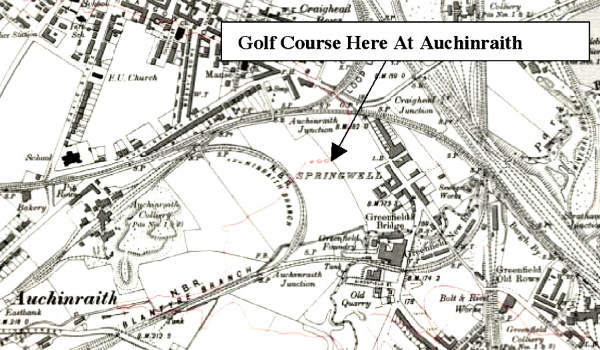 “The first annual general meeting of the Blantyre Golf Club was held in the Masonic hall, Stonefield, on Thursday evening. Rev. C Scrimgeour Turnbull, M.A., President of the club, occupied the chair. There was an attendance of about 100. The Secretary read the minutes which were approved. The financial statement was then submitted, and in doing so the Secretary stated that the extraordinary expenditure amounted to over £60, and provided ways and means are found to clear off the debt resting on the club, he was sure that the club would be in a flourishing condition in the course of a year or two.

Discussion took place regarding the finances of the club, and various suggestions were made, which were left to the committee to consider. The rate of subscription was fixed as formerly, ie, Gentlemen, £1 1s; Ladies, 10s 6d; Juniors (Under 18) 10s 6d; Family Ticket £1. 11s 6d .

The fixtures for the ensuing year were submitted, and in which appear inter-club matches with Bellshill, Kirkhill, Larkhall, and Motherwell Clubs”   (HA 11.4.1914).

Although golf is a game that more or less is generally played all year, when the weather permits, it is recognised particularly as a summer pastime, and the Blantyre golf club held their official opening last Saturday, when an exhibition match was played by T. Walker, professional to the Hamilton golf club, and Mr R.B. Stewart, Kirkhill, which brought out about 150 members and friends to witness the game. The professional was in specially good form, and his drives were watched with the keenest interest, although at times he was exceedingly unlucky with some of his “ tee “ shots. It was readily seen that Mr Stewart was an unequal opponent, and the professional ran out an easy winner by 5 up and 4 to play, the scores being, Walker, 69 ; Stewart, 77.

After the game the members were refreshed with a cup of tea and cakes purveyed by Mr M. Lair, and which was greatly enjoyed.

At the close of the exhibition game Mr David Harley thanked Messrs Walker and Stewart, for having come to Blantyre, and he said the game had given general satisfaction to the large company who had witnessed it. The club is in a prosperous condition and from appearance it is quite apparent that a successful season is in front of them.

“The Annual General Meeting of Blantyre Golf Club was held in the Masonic hall, Stonefield. There was good attendance of members with Mr A Hendry as president, offering chairperson. The minutes were read from the last meeting and finances presented which showed the club to be in good solid standing.

It was noted at the meeting that the course had been greatly improved upon in the last year, but that 29 members were currently away, serving on active duty, with more to follow. It was agreed to place these members on a Roll of Honour, and that no formal opening would take place on the course that year.”

“Blantyre Golf Club has raised a total of £9 and 9s, which was to be set aside for it’s members serving in the Great World War I. The amount was to be reserved for them coming back, for “comforts.”   (HA 8.1.1917)

“A special general meeting of Blantyre Golf Club was held in the Co-operative Lesser Hall on Thursday evening. The captain, Mr John Sharp, presided. Owing to the present conditions (assumed war and/or lack of members) there was only a small attendance of the members.

The Chairman, in the course of his remarks, pointed out that it was becoming increasingly difficult to keep the club going, and that in the opinion of the committee the club was in a better position for being wound up than it had ever been.

After the secretary had read the statement of affairs, it was moved and seconded that the club be wound up voluntarily. The attention of members is directed to the advertisement re members’ clubs, etc.”   (HA 26.1.1918)

The clubhouse will be open today, Saturday, and next Saturday from 2 till 5.Members are requested to remove their clubs.

All Claims against above club must be lodged within Seven days from this date with the secretary,

The FINAL MEETING of this club will be held in Cooperative Lesser Hall, on THURSDAY 26th Inst at eight pm 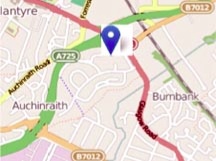 The colliery suffered a mining explosion in 1930, and its site is now an Industrial Estate. The site of the course was acquired by the local Council for housing and the site of the old clubhouse is now 32/34 Springwell Crescent, pinpointed left.

The club opened in 1913 and of course this was before the sudden outbreak of war in Summer 1914. Reading between the lines, it is clear to see the emerging picture of men going off to war and membership dropping. The newspaper account that by 1917 fundraising had started to take place, no doubt to keep the club afloat. As the new year turned into 1918 and war seemed to be looming into it’s 4th year, golf was probably not on the mind of many people back home. Tremendous casualties and horrific stories of the conditions the soldiers endured and the needless waste of life, would have been at the forefront of the management’s minds as they entered the meeting in January 1918. The decision to close the club would have seemed inevitable.