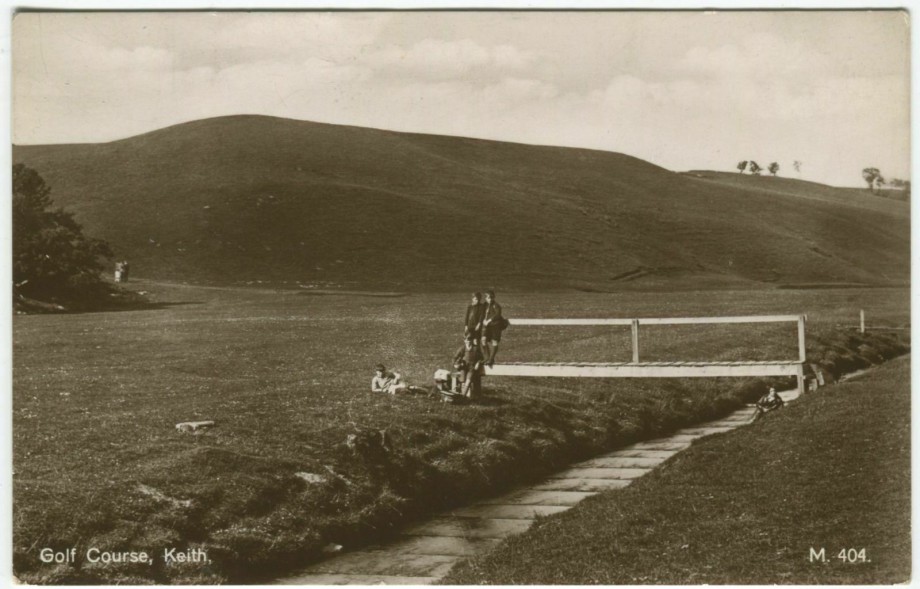 Club has been at present site since 1963. 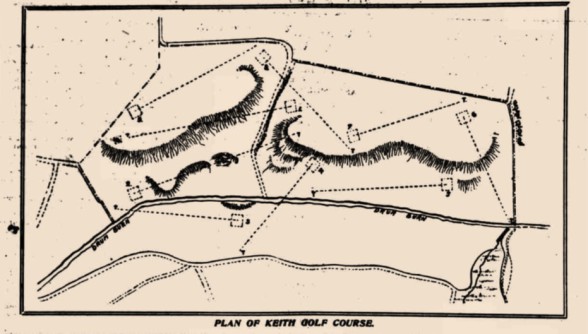 Several attempts at various meetings were made to Form a club at Keith in November, December 1894, however, without success. The problems were in securing suitable ground for the course. It would be 7 years later in 1901 before they would resolve this issue and form their club.

The committee appointed at a recent public meeting to approach the proprietor, Mr W.F. D. Steuart, of Auchlunkart, for the use of the ground at Auchanacie, have failed to come to terms, and the project has meanwhile fallen through.

“The best laid schemes o’mice and men gang aft aglee.” And I regret that the Keith golf course is yet in contemplation – the committee appointed to approach Mr Steuart having failed to come to terms with that gentlemen. The district around Keith is finely adapted for the game, and there is any amount of enthusiasm in the scheme. The committee therefore must not despair. Surely there are other stretches of meadow and moorland the owner of which is able to accommodate. Granted that, then the battle is half won.

A meeting of the committee appointed to form a golf club for the town was held in the institute hall on Wednesday evening. Mr A. Auchinachie, Solicitor, presiding. A sub-committee reported that Mr G. McCurrach the tenant of Drum Farm, was willing to lease 40 acres on that farm on reasonable terms. The sub committee’s report was approved, and it was remitted to another sub committee to ascertain the probable number of members. The rates of subscription were fixed as follows :- Gentlemen £1 1s, Ladies 10s 6d, and apprentices 10s 6d. 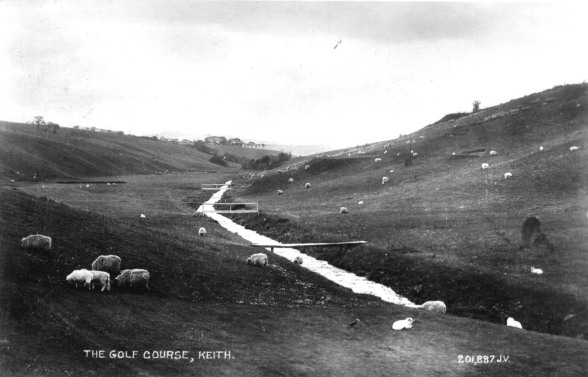 Mr Dalgleish, the professional for Nairn Golf Club, on the invitation of the committee appointed to form a golf club for the town, paid a visit to Keith the other day and inspected the proposed course on the Drum Burn Valley. Mr Dalgleish having gone round the course expressed himself as highly pleased with it, and afterwards arranged for a nine hole course, embracing excellent variety as to distance and ground.The holes are from 150 to 400 yards apart. Arrangements are being made to have the course opened at the earliest possible opportunity. About 90 have intimated their desire to join the club.

As indicated in these columns from time to time a number of golfing enthusiast in Keith set themselves the task of procuring a golf course for the town. There were many difficulties in the way, but their efforts have happily been crowned with success. Suitable ground was acquired on reasonable terms on the farm of Drum, Keith, from the tenant, Mr George McCurrach, and with the aid of professional advice a nine hole course was laid out, particulars of which will be found in the sketch given above. Once it was finally resolved a club should be formed, and the executive saw reasonable prospect of healthy finance, the project was pushed forward with all possible speed : and, while everything is not yet been finally adjusted, it was considered expedient, in view of the advancing season, to formally open the course on Wednesday last. Over a hundred members have been secured and there was a good representation at the opening, which took place at 3 o’clock, when a match was played between sides chosen by the captain of the club ( Mr Sydney Smith, Factor. ) and Vice Captain ( Mr George Taylor, Harmora. ) Besides the members who took part in the opening play there were considerable number of ladies and gentlemen also present, who, at first, contented themselves by witnessing the varying fortunes of the game having a look round the course and locating the various putting greens and teeing grounds. Here it may be also stated that the ground secured no little scenic beauty, and offers excellent facilities for spending a delightful afternoon or evening while playing over its breezy heights or more sheltered hollows.

The Captain and Vice Captain having chosen their respective sides, a start was made by Mr Sydney Smith driving off. His opponent, Mr Taylor, followed, and in succession, came the following :- Messrs A. Auchenachie, Solicitor, and A. Currie, Ironmonger ; J. Watt, Druggist, and J. Mitchell Jnr ; Charles Kemp, Draper, and T. Mitchell, Draper ; J. Kemp, Mid Street, and J. Thomson, Factor ; W. Sandison, Draper, and A. Henderson, Saddler ; Rev. Sydney Smith, Manse, and G. Kynoch, Erskine House ; G. Wilson, Haughs, and Alex. Thomson, Strathisla House. The spectators evinced the keenest interest in the play, both from the first teeing ground and afterwards, a lot of gentlemen, and frequently a few ladies, following the fortunes of the respective contestants. Mr S. W. Mayer, Solicitor, the enthusiastic secretary of the club, attended to the arrangements and as the couples finished the first round Mr Mayer had the scores totalled up, and announced the Vice Captain’s side had pulled off the honours by a good majority. The company then adjourned to the golf house, where an excellent cup of tea, purveyed by Mrs Robinson, Chapel Street, were served out and, after the excitement of the play, much appreciated.

A short interval devoted to social intercourse having elapsed, the Captain of the club, stepped forward, and I a few well chosen sentences expressed the great pleasure of the office bearers and council at seeing so many present and having such an excellent start. Mr Smith also stated that when all the details had been finally attended to they hoped to have another such gathering. Three hearty cheers having been given on the call of the Captain, for the prosperity of the club, similar compliment was paid to Mr Smith on the call of Mr George Taylor.

Play was then resumed, and when the match players had been sent off a number of the onlookers, including several ladies, followed on and appeared to enjoy to the full their experiences of the game. Until a late hour in the evening there was a steady stream of players making the round, and at intervals, comparing the number of their strokes with their with those of their opponents and friends. A high wind prevailed on Wednesday, but otherwise the weather left nothing to be desired. 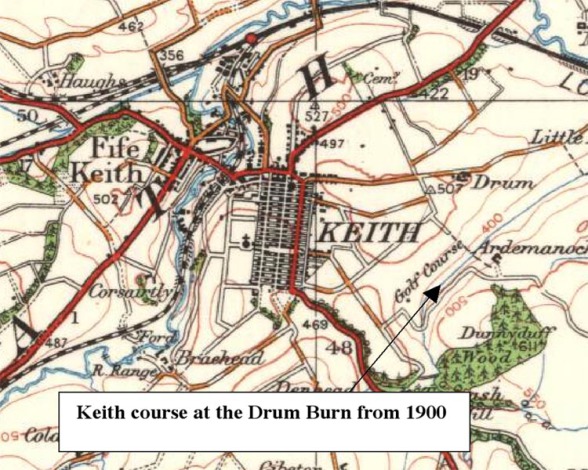 Previous to a year ago the good folks of Keith had yet to learn the intricacies and allurements, the pitfalls and the iniquities, of the Royal and Ancient game. Cleek, Brassey, and Driver might have been implements or instruments of torture like stocks and thumbscrews for anything they know to the contrary, and they were as unfamiliar with one as the other. Enlightenment has come, and the Keith Golf Club, which commenced operations twelve months ago, has turned the heads of the Keithites. To-day the youngest “ nickum” able to wield the ash plant discarded by a cattle drover gets himself into position over a street pebble, squares his legs, pulls his shoulders up, and “ Putts” for all he is worth, for a crevice in the kerb ; amateurs on the links swing their drivers at the tee like a flail, strike everything but the ball, and disfigure the face of mother earth as if they were so many turf cutters ; experts deplore their luck in orthodox imprecations when they find their into a “ bunker” or meet with a “ stymie” ; and “ Fore !” is the danger signal with everyone for everything from the message boy hurrying round the corner, to a runaway horse. The golf fever has found its way to Keith, and is at present in the epidemic stage. 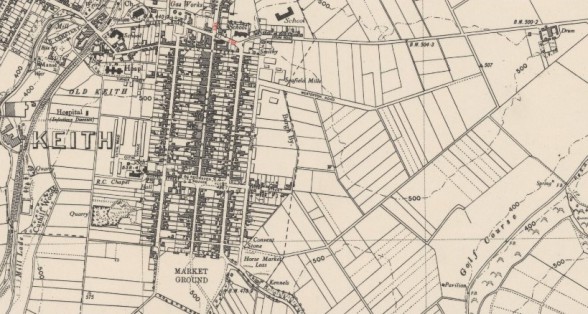 The new clubhouse erected at the Keith golf course was formally opened on Wednesday afternoon by Mr James A. Stephen, Solicitor. In honour of the occasion, the members held an “ At Home” at which there was a very large attendance of ladies and gentlemen.

Mr Stephen, in performing the opening ceremony, referred to the unavoidable absence of the President of the club, Mr Gordon Duff of Drummuir, and, proceeding, said he wished to state in public what he had said over and over again in private – how much he admired the pluck and perseverance of the promoters of the club, who had carried it on with so much success since its formation about six years ago.

The Keith course had many atttractrions, and not the least of these was its beautiful and romantic situation. Golf provided most pleasant and health giving exercise for young and old, strong, and those not so strong. Those across the border had borrowed a good many things from Scotland, but none better than the Royal and Ancient Game, and while holidaying in Yorkshire recently he had been much struck by the large number of golf courses all over the country. He wished to impress upon all young people the advantage to be derived from the game, and with the fine new clubhouse he hoped that the Keith club would receive a large augmentation to its membership. The fee was within the reach of all. The erection of the house had entailed an outlay of about £95, and 20 members had come forward and guaranteed that sum. Meantime a subscription sale had been started to repay it. Along with the secretary, he, ( Mr Stephen ) had purchased some articles of furniture for the rooms, and he asked the club to accept these. ( Applause ) He thereafter declared the clubhouse open.

On the call of Mr Mayer, Solicitor, secretary of the club, Mr Stephen and Mrs Ogilvie were cordially thanked for their services, and Mr Stephen for the handsome furnishings he had so generously provided, including armchairs, tables etc. Cordial thanks were also awarded to Mrs Thorburn. After tea had been served, several competitons were engaged in, and the chief results were :- Mixed Doubles – 1, Miss E. Geddes Brown and F.P.B. Mitchell ; 2, Miss Stephen and J. Laing ; 3, Miss Gordon and Mr A. Auchinachie. Gentlemens singles – 1, George Taylor and D.J. Corrigall, equal ; 3, A.S. Third ; 4, Seargent Major Reynolds. During the afternoon, string and pipe bands discoursed excellent music.

The building, it may be mentioned,is erected in a substantial manner, the walls being of corrugated iron on a wood framing, the whole being constructed in such a way that, in the event of an alteration being made on the course at any time, the house can taken down and re-erected in another direction. The roof is also of corrugated iron with an ornamental ridging, and the floor is of railway sleepers. The verandah, which projects 7ft 6 inches in front of the pavilion, is nicely formed with pillars and arches, the pillars being dressed and moulded and a low framed railing runs between each arch. There three entrances to the verandah, and a seat runs along the back.

The pavilion is divided into two rooms, one for the ladies, and the other for the gentlemen. Boxes are provided around the walls, and seats run along the front. The rooms are lighted by windows at the front and skylights on the roof at the back.

The scheme of colouring is very effective. On the outside the walls are painted a cream colour, the roof red, and the exposed woodwork an olive green, the inside having a light green stain, which has a fine appearance with the white ceiling. The work has been carried out in a satisfactory manner by Messrs G & R. Cameron, carpenters ; and Mr John Symon, Painter, and the architect, Mr D.J. Corrigal, Cross Street, is to be complimented on the excellent result of his labours. 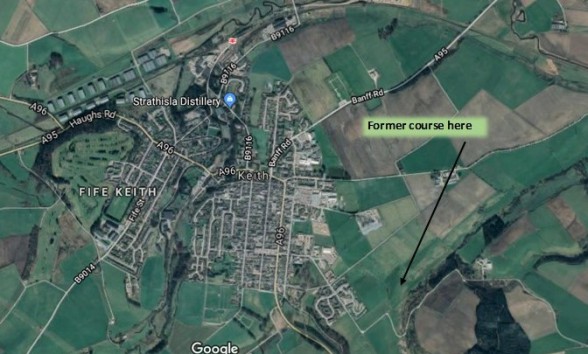 Course re-opened after the war

The Keith golf course, after being practically closed since August 1914, was formally opened for the season on Wednesday, when there was a large attendance. The afternoon was spent in playing off a mixed foursome competition, for which there was a large entry. The results were :- 1. Miss Sandison and Dean Macdonald 2. Miss Cooper and C. McConnachie 3. Miss McHouston and T. Laidlaw 4. Miss Auchenachie and J.J. Weir. The proceedings terminated with the presentation of prizes, which were handed over by Mrs George Taylor, Earlsneuk.