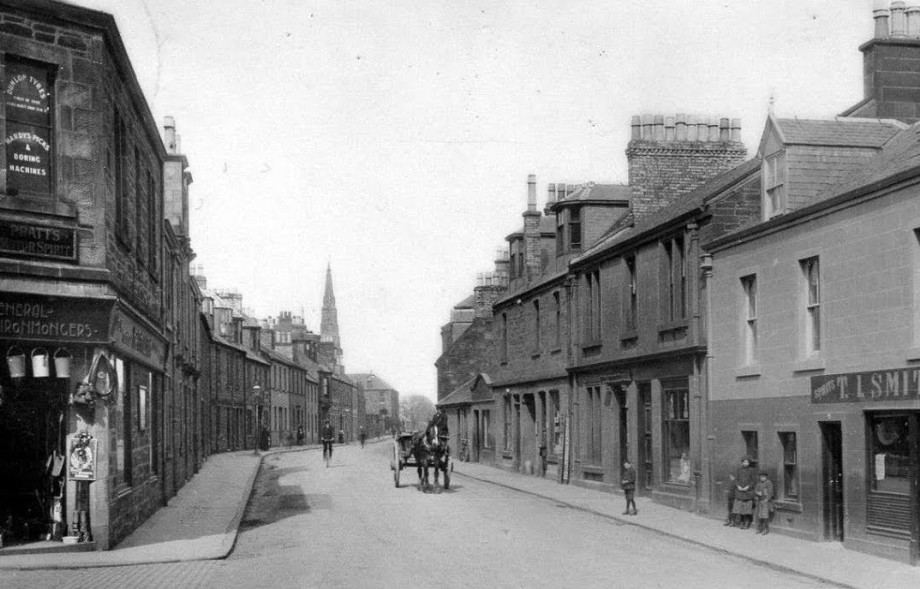 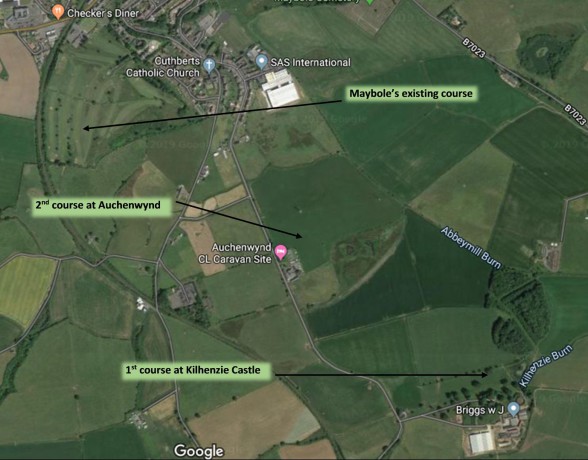 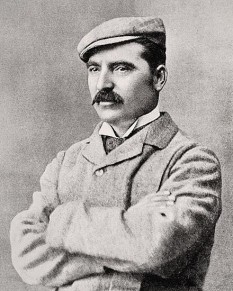 We understand that the committee of the Maybole Club have engaged Mr William Fernie of Troon ( In Picture )  to lay off their new course at Auchenwinn. Mr Fernie, who is well known throughout the country as an expert in laying off golf courses, was in Maybole on Wednesday last surveying the new ground at Auchenwinn and laying off the course. He expressed his satisfaction at the ground which the club has been successful in leasing. The turf is exceptionally good, and the soil being sandy ensures good golf being indulged in all year round. There is no fear of flooding , the ground having a gradual slope on all sides. From the course an unrivalled view of Maybole is obtained.

One desirable feature in the plan of the new course is the complete absence of crossing throughout the nine holes. With the powers possessed by the committee, in cutting what grass they think is necessary, and only sheep grazing being permissible, the comfort of the golfer is assured, and golfing under ideal conditions can be played. The members are now being enrolled for the coming year, which begins next month ( May ) and the Honorary Secretary, Mr J.B.Lang, will be pleased to enrol parties desirious of joining. The terms are for Gentlemen 21s per annum : Ladies 10s 6d per annum : Mr Wallace, Joiner, has been successful in securing the contract for the removal of the present clubhouse at Kilhenzie to Auchenwinn, also the erection of bridges and gates at the new course. The removal will be carried out this week and arrangements are being hurried forward to enable members to start play over the new course within the next ten days.

It is hoped that the Maybole public will come forward in large numbers and show their appreciation of the efforts of the committee by having their names enrolled as members. There is no doubt that,having a good course convenient to the town a large number of visitors would be tempted to pay a visit a locality which is not sufficiently known , and also prove incremental to the community. 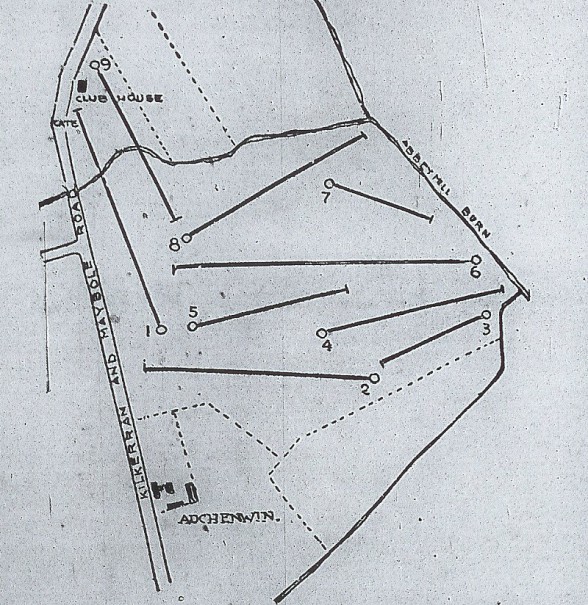 We find, after a recent interview with a number of the members of the Maybole Golf Club, that they are unanimous in the opinion that the management have shown considerable wisdom in the selection of new quarters at Auchenwinn. It is only about four weeks since the course was opened, and it must be gratifying that members are taking such full advantage of it, so much so, indeed, has this been the case that in several occasions the links have been congested , and players have had to wait their turn – a perfect miniature Turnberry.

An inspection of the new course will show the tees and greens to be wonderfully good  and considering the short time the club have had the grounds in hand, and there can now be no doubt that golf has come to stay in Maybole. It is quite apparent that members have renewed their interest in the game, judging from the unbounded enthusiasm that prevails.

We learn 15 new members have been proposed within the past fortnight, and the committee are sanguine that a greater number will yet come forward and encourage what is a genuine effort to enhance the town and it’s interest in establishing a first class golf course in a neighbourhood that abounds with unrivalled scenery and associations that are both romantic and historical. A very pleasant feature of the new course is it’s close proximity to the town, so that visitors to the locality can conveniently and easily avail themselves of it , and are at liberty to do so. The ladies committee met on Monday night and appointed Miss McKissock as convenor and Miss Maggie Rowan and Miss Mary Blair to the vacancies on the committee.

A distinguishing feature on the old course at Kilhenzie was the mixed foursomes competitions, and we are pleased to say that these will be continued on the new ground, the first of these being fixed for Saturday first at 2.30pm when tea will be served by the ladies committee. Mr Lang informs us that the special subscriptions asked for in connection with the formation of the new course now amount to nearly £50 and to ensure that the grass will be kept down and the ground retained in excellent order for golf, the committee are presently negotiating for the purchase of a horse mower.

It is proposed to hold a formal opening of the new grounds sometime in September, and it is expected , if he can find it convenient, that Sir Charles Fergusson, the Honorary President, will perform the opening ceremony. 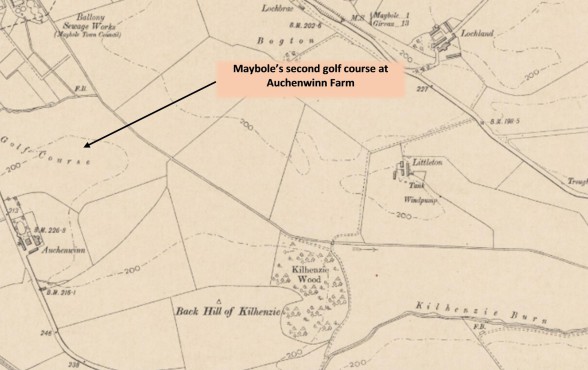 The members of the Maybole club are now playing over their new course at Auchenwinn. The ground is on the estate of Sir Charles Fergusson Bart, of Kilcerran. The distances to the holes are :- First Hole, 344 yards ; second Hole, 306 ; third, 132 ; fourth, 232 ; fifth, 199 ; sixth, 383 ; seventh, 117 ; eighth, 280 and the last hole, 225 yards. The total lengh is 2218 yards, and is fully 300 yards longer than the old course at Kilhenzie. It is the intention of the committee to construct bunkers at one or two of the short holes. The turf is of a splendid fibre, and the ground having a sandy bottom, a dry course is assured for playing on all the year round. Arrangements are being made for the formal opening of the course within the next few months, and it is hoped that Sir Charles and Lady Fergusson will be present at the ceremony, on which occasion it is also expected that there will be a more commodious club-house. On Saturday last an exhibition four ball match took place over the course between Messrs R. A ndrew and F. Peebles on the one hand and Messrs James Robb and E. Lockhart on the other. At the finish of a very interesting game it was found that Messrs Robb and Lockhart were victors by 2 up and 1 to play.

Hole By Hole Scores for the match 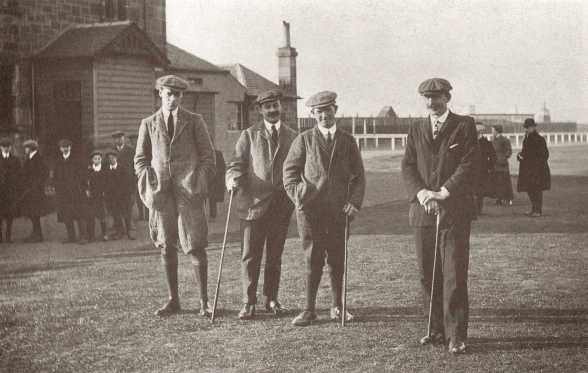 Golf -   The first mixed foursomes competition of the season of the Maybole Club took place on Saturday last over the course at Auchenwynd.  The weather was delightful.  A number of gentlemen failed to find partners, and in consequence the contest was not so exciting as was at first anticipated.  Miss Ramsay, the convener of the Ladies Committee, had an excellent tea provided, which was expected to induce the presence of more ladies,. Everything considered, a very pleasant day was spent.  The finalists turned out to be Miss Carrie Rowan and Mr John Crawford against Miss Kate Ramsay and Mr Thomas Neil, and the latter were declared the winners.

The tie for the “Adair Wood” cup of Turnberry Club between James S. Galloway (2) and John Rafferty (8) was played off on Saturday and resulted in a win for the former by 5 strokes.

John H. Andrew, Prestwick St Nicholas, took part with the Plowlands team in the Edinburgh Evening Dispatch” tournament on the Braid Hills, Edinburgh on Saturday,.The competition is by double foursomes.  The Plewlands team successfully negotiated the first round by defeating Strathearn by three holes, J.H. Andrew and his partner, James Ranken, jun. Being one hole up, and the other couple two up and one to play,. In the second round Andrew and Ranken finished all square with their opponents, but the other Plewlands pair finished six down with five to play.

The team who defeated Plewlands was the Edinburgh Western. John Andrew’s connection with Plewlands club dates back a number of years.