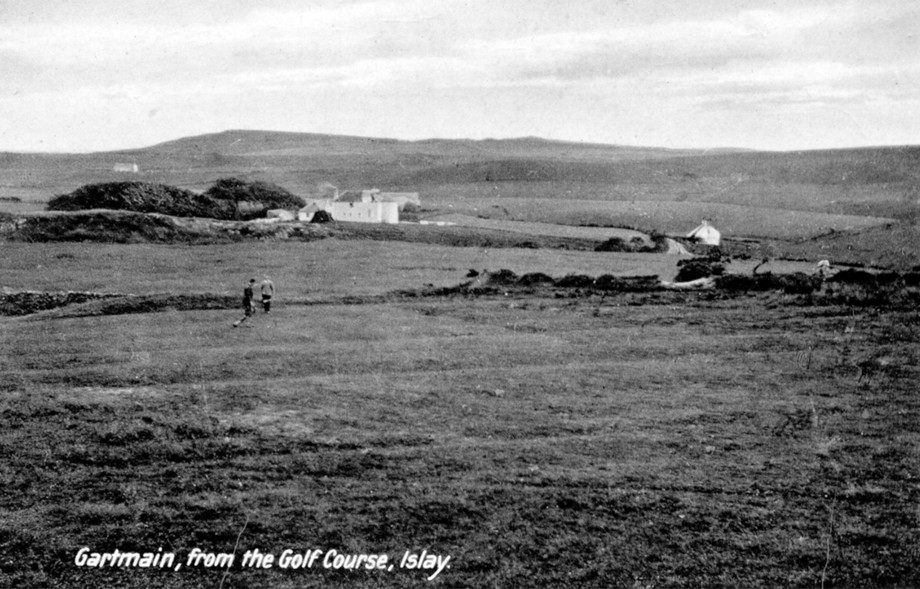 This view is from the 3rd green towards Gartmain Farm 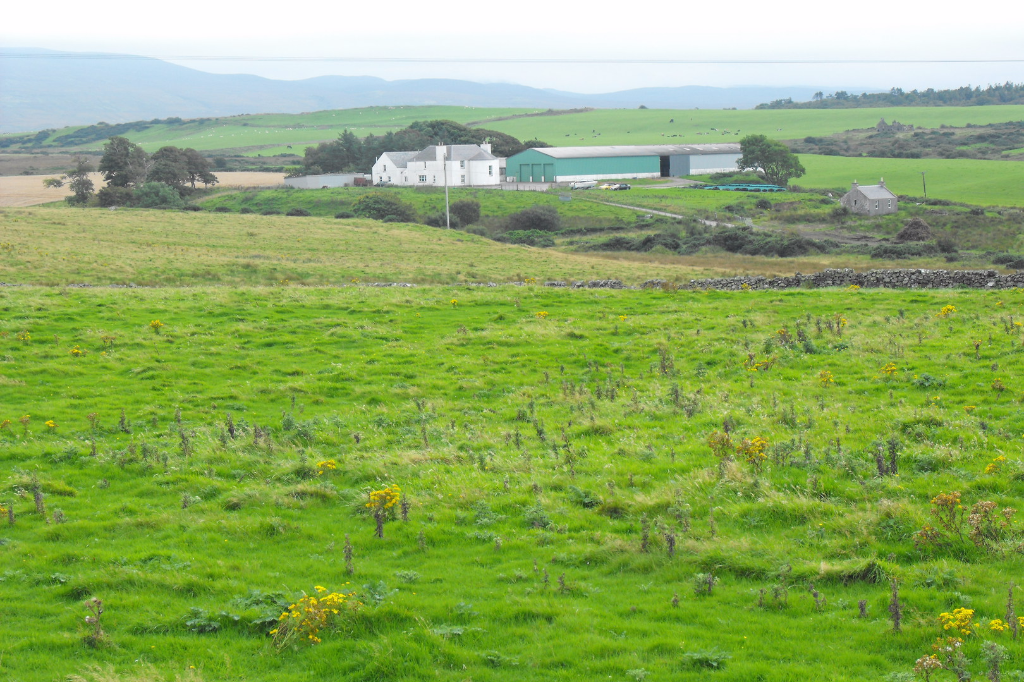 A modern view from a similar angle

Gartmain Golf Club.  Founded 1907.  A 9-hole course on Gartmain Farm between Bowmore and Bridgend on Lochindael.

The holes demand skill and it is not a duffer’s course, on the contrary , a bad stroke is invariably punished and this quality makes the course a searching test of golf.  The hazards are numerous and consist of rocks, turf dykes, hedges, rushes, roads etc.  "The player who beat he Colonel(Bogey) on level terms requires to play very good golf."  The first ball was driven by Mr Hugh Morrison of Islay House, a Past Captain of Islay GC, and he agreed to become President. 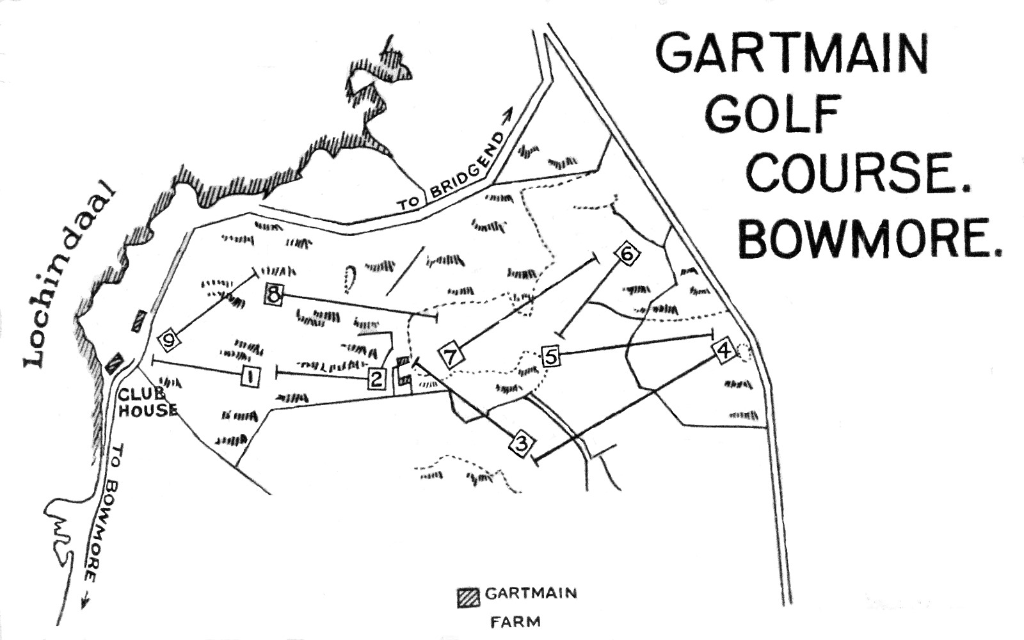 "The first annual general meeting of this Club was held in the club house on the evening of Saturday last.  In the unavoidable absence of Mr M. Mactaggart, the captain of the club, Mr J. Bryce was called upon to preside.  He regretted the absence of the captain, who was on holiday on the mainland.  He spoke of the success that had attended the institution of the club, of the large membership, and of their enthusiasm for the game.  The course was being well played over, and was coming now into good shape.  Much of this improvement was due to the work of Mr A. Woodrow, who had been appointed green keeper, and who promised to give every satisfaction in that capacity.  Mr R.E.Caron, hon. Secretary, gave in his report, dealing with the work done at the various committee meetings, including the drafting of the bye-laws of the club, the agreement with the tenant of Gartmain Farm, and other items of club interest.  The membership, including ladies and boys, was shown to amount to the number of 82.  this was certainly very satisfactory, and showed that the club was supplying a felt local want.  The financial report was read by Mr G.G. Bowie, hon. Treasurer.  It was also a very satisfactory one, and showed that the finances of the club are being well attended to, and the accounts kept in a business like manner.  With increased revenue, more could be expended in the improvement and maintenance of the course.  Hearty thanks for their able services were accorded to the secretary and treasurer, and to Messrs Gibson and Millar, who audited and checked the accounts.  Arrangements are to be made for holding a competition for the captain’s prize some time next month, or the following one.  All the office-bearers were re-elected for another year" (OT 2.5.1908). 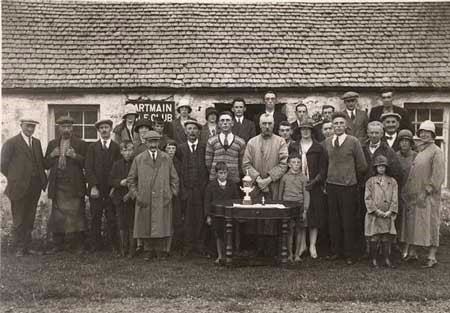 The Gartmain members, Looking a bit doon in the dumps and drookit 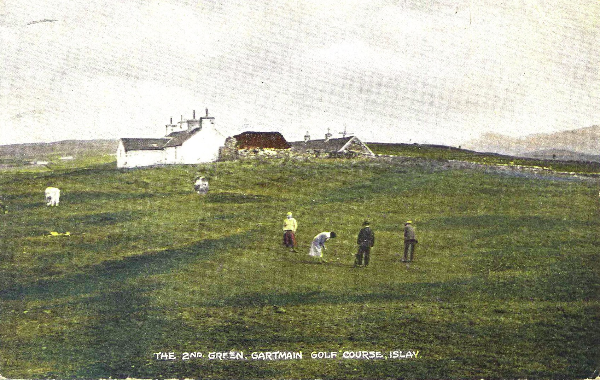 Photo 3, The house ( Gartloist ) in the picture is still there ( see map )

"The competition for the prizes given by Mr M Mactaggart, captain of the club, is in course of progress, the third round of nations being played this week. Several very keenly contested games have taken place.  On Saturday last there was a mixed foursome stroke game for two prized for ladies, kindly offered by Messrs J.B.Kendrick and W.Millar. there was a very good entry, and the play was very close. At the conclusion of the round, it was found that there was a tie between Miss Brown with Mr D.Sinclair and Miss Brunton with Mr J. Livingstone. On playing off the tie, victory went to the latter couple, their score being 65 less4-61; whilst the first named pair recorded 64 less 1-63, Miss Brunton, therefore, won the prize given by Mr Kendrick, and Miss Brown that by Mr Millar. On the previous Saturday a boys’ competition was held for prizes. The winners were- 1, RoderickCaron; 2, Murdoch Mactaggart." (OT 4.7.1908) 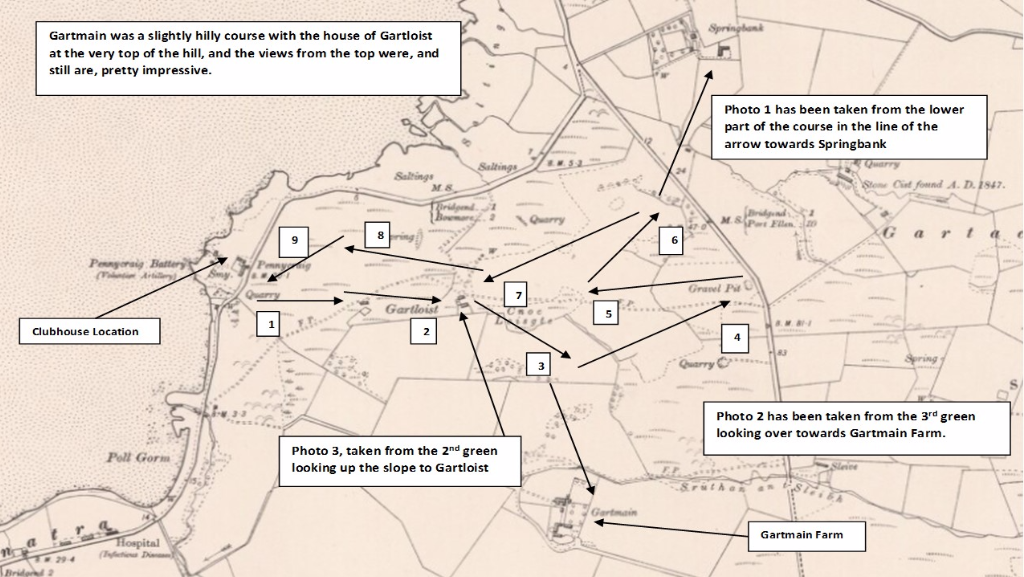 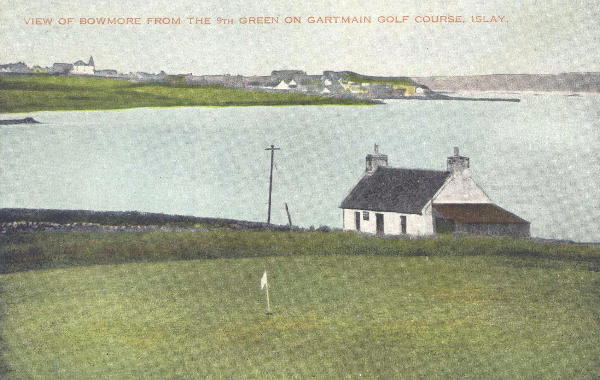 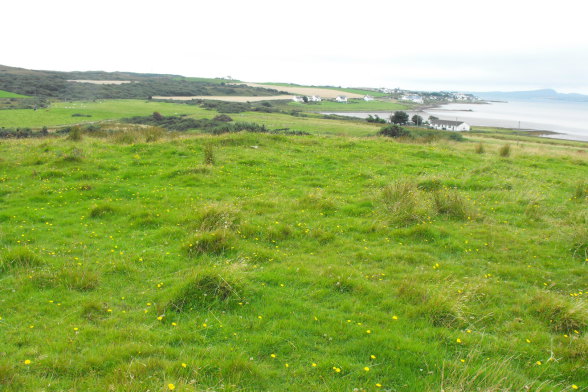 View from the top of the course towards Bowmore 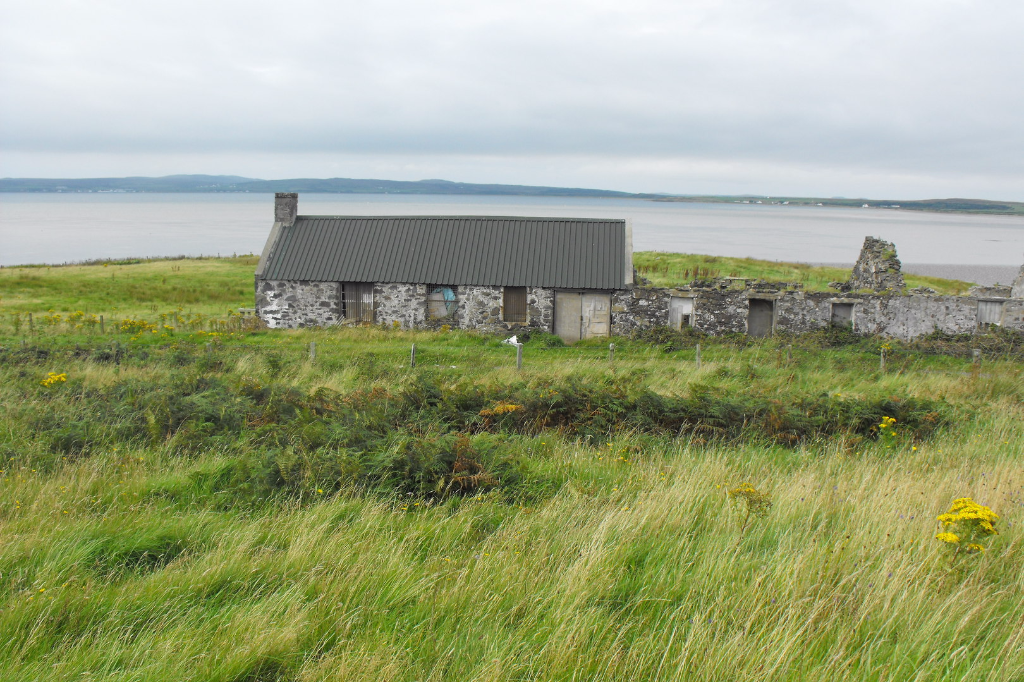 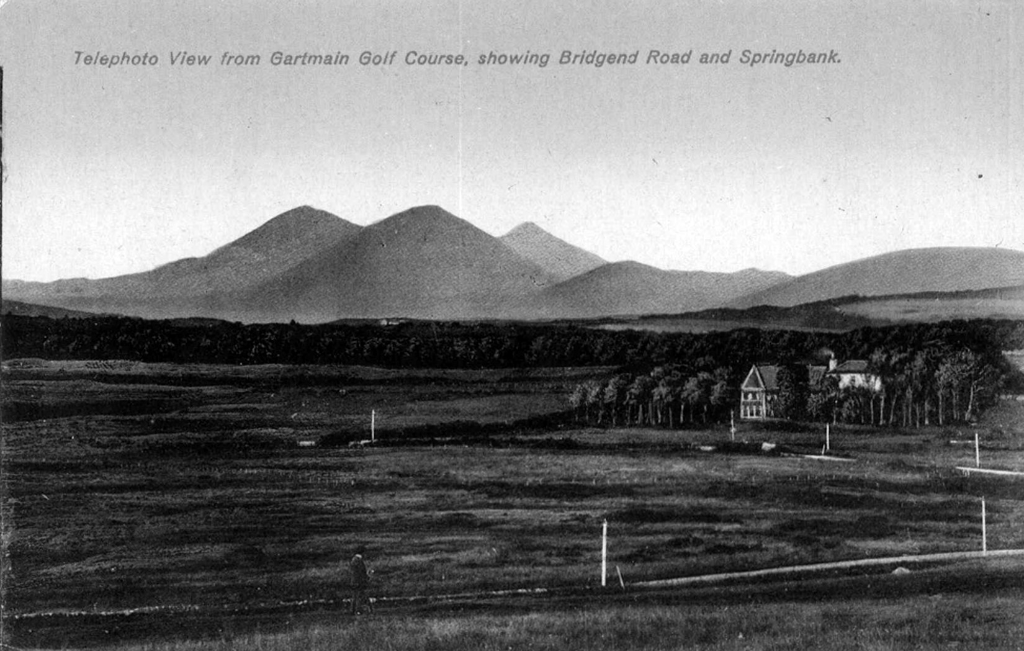 Photo 1, Taken from the lower part of the course, looking away from the shore ( see map )

The club closed in 1938 and the clubhouse became a private dwelling house.