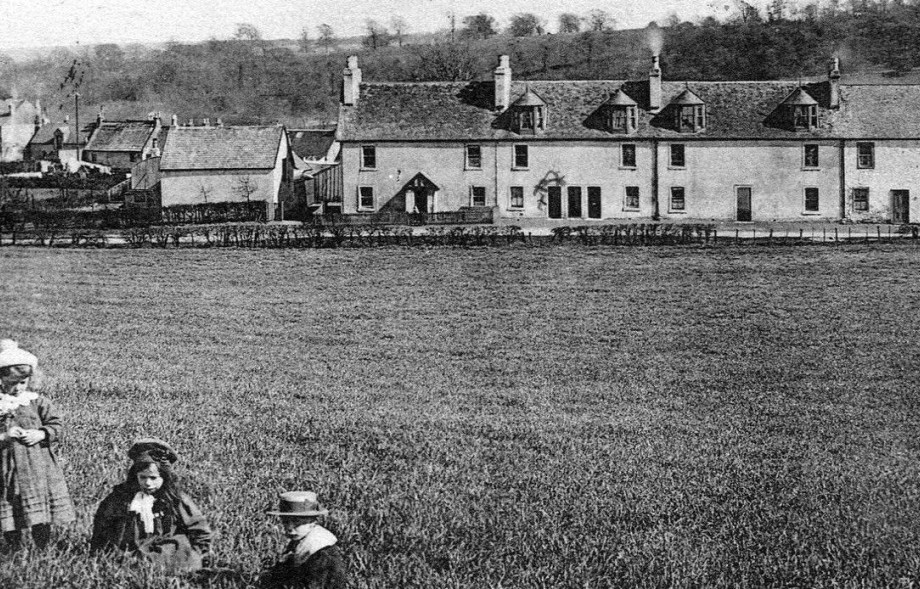 Cumbernauld Golf Club. At a well attended and representative meeting of the residenters in the district, held in the Southern Hall, it was resolved to form a golf club called “ The Cumbernauld Golf Club” , and a committee and office bearers were appointed. It was reported to the meeting that 50 or 60 acres of old pasture, forming part of the estates of Cumbernauld and Greenfaulds, and commanding an extensive view to the South could be obtained. The annual subscription was fixed at 10s 6d for Gentlemen and 5s for Ladies. Monthly members 2s 6d, weekly 1s, and daily 6d. "

"An adjourned meeting was held in the Southern hall last Friday, when the final arrangements as to the formation of a golf club were made. We understand that the course is to lie in the direction of Greenfaulds and South Muirhead. It is proposed to open the course by the end of next week, and in the meantime the formation of the greens, etc, is being gone on with.

This club owes it’s existence to the interest taken in the game by some of the leading gentlemen about the Southern District, and the membership roll already contains not a few wellknown names. In passing, it may be noted that the new minister, the Rev John Ogilvie, is an expert at the Royal and Ancient game, and there is likely to be some exciting, though amateurish, competitions during the coming season." (KC 2.6.1900)

"The Cumbernauld course was opened on Saturday last at 3.30pm., but the weather unfortunately was not favourable for the game. There was a good attendance of both Ladies and Gentelmen at the hour of meeting, when Mr Sommerville of Greenfaulds after a few appropriate remarks handed to Mrs McIntyre of Inverlacken a presentation golf club and ball, with which she performed the initial ceremony of driving off the first ball. Mr Sommerville thereafter declared the course open, and not withstanding the inclemency of the weather a large number of Ladies and Gentlemen took advantage of the occasion by continuing the game till darkness set in. The presentation golf club is to bear a suitable inscription."   (KC 16.6.1900)

"A most successful dance in connection with the Southern Golf Club was held in the Southern Hall on Friday last. Over fifty couples were present, and, although the capacity of the hall is scarcely equal to that number, the arrangements were carried through very pleasantly, so that all enjoyed themselves"   (FH 1.2.1908).

It would appear that the club went into abeyance during WW1.

"A representative company assembled in the Southern District Hall on Thursday of last week to consider the resuscitation of Cumbernauld Golf Club. Mr Marshall, Greenfaulds, presided. The propable capital and annual expenditure were put before the gathering. It was decided to proceed with the Formation of the club, and a committee was appointed to go more fully into the matter and thereafter to report. The entrance fee was provisionally fixed at 10s, and the annual subscription at 10s for ladies and 15s for gentlemen"    (KC 2.3.1923).

"At a meeting held in the Southern Drill Hall it was agreed to form a golf club. Various ways and means were discussed, and a committee formed to go fully into the matter and to report to a meeting to be convened later. The inauguration of a club in South Cumbernauld would fill a long felt want in that district."   (FH 3.3.1923)

"At a meeting held on Tuesday in the Southern District Hall – Mr Marshall presiding- the report of the committee delegated to go into ways and means in connection with the proposed resucitation of Cumbernauld Golf Club was read by Mr Sword, secretary interim. It was stated that a lease of the fields which had formerly comprised the golf course could be obtained and that the capital expenditure would be £23.19s and the annual expenditure £24. It was unanimously agreed to re-start the club under the name of Cumbernauld Golf Club and the following appointments were made. Hon. President, Captain A. Burns ; Hon Vice President, Capt. G.S. Nelson Scott ; Captain, Mr Brown. The course is located at Greenfaulds."    (FH 17.3.1923) 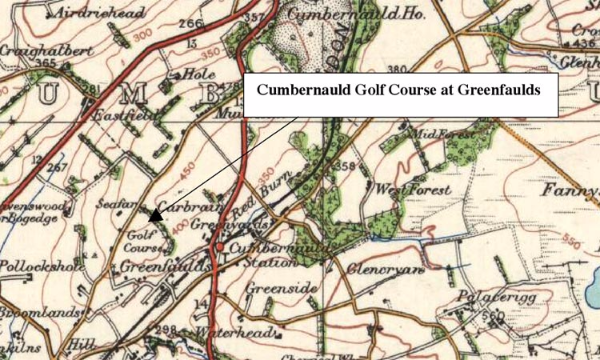 The course, which is on the same ground as the previous Cumbernauld Golf Course is expected to be ready for play early in April."

"The golf course is to be open for play from Saturday first. The greens will not be in good order for some time, but the committee have done what was possible to procure a good surface. They believe that many will be glad of this opportunity for renewing aquaintance with the game before anything in the nature of competitions is attempted, and that those beginning will welcome it also. A shelter is being erected to provide cover when necessary and to permit of travelling garments being discarded during play."

"The golf club is still the centre of attraction and we are informed that a mixed foursome competition with tea afterwards is to be held on Saturday afternoon 19th May. We welcome this recuderence of the social life of the district as being an indication that we are gradually emerging from the aftermath of the war. In reply to an enquiry we learn that the club does not exclude persons resident in Glasgow or elsewhere, but that the intention is to limit those to the friends of local members. The old club was noted for it’s social qualities, and we are informed that the local response has been such as to justify a confident expectation that this unique, or at least uncommon feature, will be retained."

"The golf club assembled to play in the opening competition on Saturday. The weather was threatening ; but, happily, the threats did not materialise. The play was mixed foursomes over 18 holes. After the first nine holes a rest was made, while, thanks to the kindness of Mrs Boyd and Mrs Brown, tea was made and partaken of.

The clubhouse at this stage was the centre of attraction, and the players showed a real appreciation of the dainties which the ladies above mentioned had provided. The golf prize was won by Miss Hardie partnered by Mr Brown, ( Captain ). Altogether, the afternoon was a most enjoyable one, and indication that the club is now fairly well set in it’s feet."

"It has been found impossible to carry for the lack of support, and the club has now been wound up. The club has been in existence for many years, and despite personal sacrifices by the committee to keep it going it has now been found necessary to liquidate."    (S 5.10.1936)