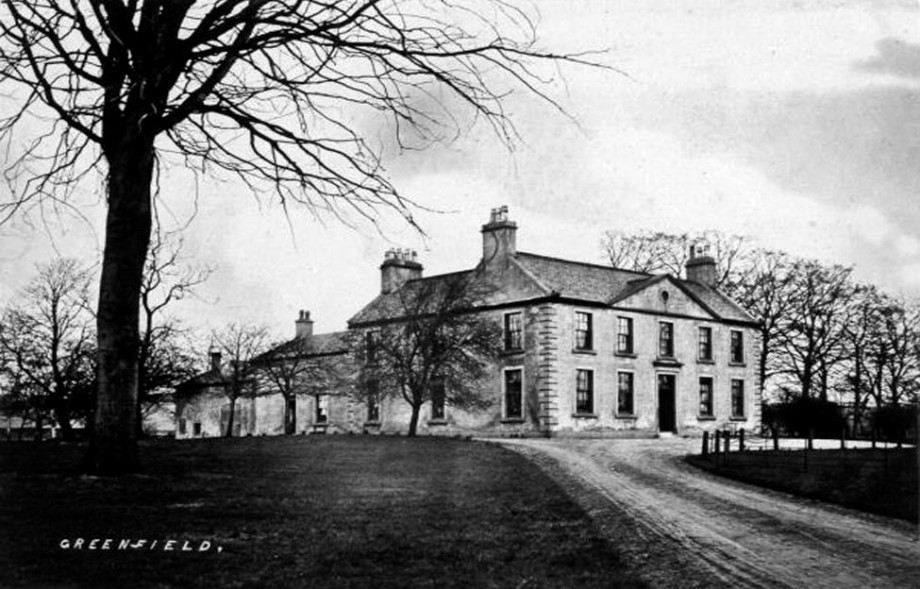 Glasgow Post Office Golf Club. Instituted 1909.  A 9-hole course in the grounds of Greenfield House, Carntyne.  The course was extended to 18 holes early in 1911. 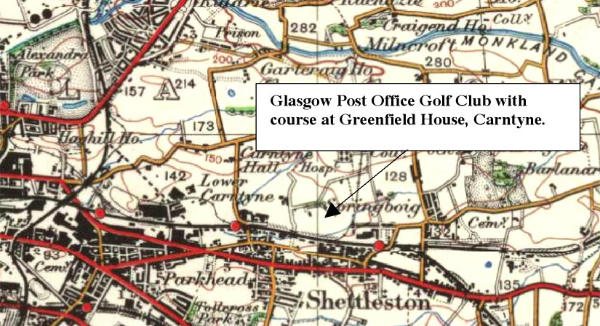 "It is only eleven months since the Glasgow Post Office Club acquired ground for the formation of a nine-hole course at Greenfield, Carntyne, and now arrangements are in hand for the extension of the course to eighteen-holes.  Mr D Bone was asked by the committee to visit the ground and give them the benefit of his opinion, which he has ungrudgingly done, the outcome being the planning of a links which, when complete, will certainly test a golfer’s skill in all departments of the game.  The soil is of a sandy nature. and consequently the turf is dry.  Most of the new greens will be natural, while hedges and burns will assist artificial hazards in making players keep the line.  The course, as shown in the sketch, measures 5314 yards, and, if necessary, with a little rearrangement about 300 yards can be added.  The distances of the holes are: 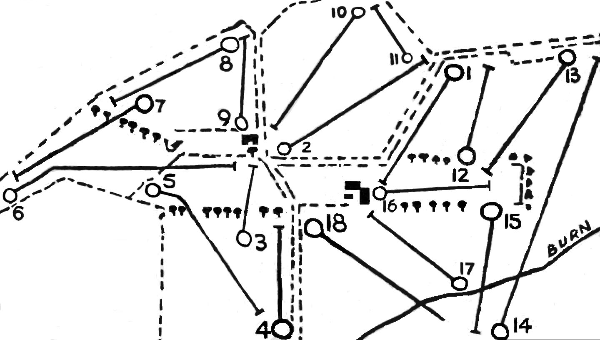 With a splendid clubhouse and an interesting course, the club promises to become one of the most successful near Glasgow.  A whist drive is to be held in the clubhouse on November 21st, and a capable committee under the convenorship of Mr George Tait, are making elaborate arrangements for the event.  The final competitions for the season have just been concluded.  The ladies section turned out well for an eclectic event, the prizes presented by Mr Webber (then President) and Mr W Armour (Superintendant Telegraphs).  The winners were Misses K Watt, J Russell, J Crawford and M McMeekan.  On Saturday last, the men took part in a scaled bogey contest for a handsome prize presented by the captain Mr P D Walker.  Bogey was fixed at 75, but a strong gusty wind gave the Colonel more than a sporting chance.  The winner, Mr G Mc Dougall, with a score of (17) 63, was three up, the next best being three down.  The winner who holed the fourth hole in one, also returned the best scratch  score.” (GET 21.10.1910)

Ray And Duncan At Carntyne

Edward Ray, last years Open Champion and George Duncan, whose most notable recent achievement was his victory over Harry Vardon in the International contest at Hoylake, played an exhibition game of two rounds over the Greenfield course at Carntyne, of the Glasgow Post Office Golf Club, yesterday. A hole match took place in the afternoon, and in the evening they engaged in a stroke competition. Both games proved remarkably even, the issue in each round being carried to the last green. Apart from this, the play was of an order which delighted the large concourse of spectators. The hole match was won on the last green by Duncan, and the stroke competition ended with both players equal at 67. This was the first professional match over the course ( which extends to 5072 Yards ) the previous record for which was 76, achieved in the last monthly medal competition by Mr G. MacKay, who was then a scratch player of the club.

Among those present yesterday was Mr Walter Webber, Postmaster of Glasgow, President of the club.

The scores in the hole game were :

A crowd estimated at almost 3,000 witnessed the evening game. It was not expected that the players could improve `upon their afternoon scores. This expectation was borne out so far as the lowest score was concerned, although Ray reduced his total by one stroke. At the first hole Ray led, but Duncan drew level at the fourth hole with a great putt. Ray, however, was playing superbly, and took the eighth and ninth in a stroke less than his opponent, the ninth being a 2. Up till the long fourteenth hole the ex-champion appeared unbeatable, registering another 2 at the eleventh. A change came over the match however, at the long hole. Both played their second shots to land safe of the burn, Ray was rather strong with his third, which lay up the slope at the back of the green. Running down too far, he missed his putt and took 6, Duncan being 5. The fifteenth saw Duncan at the top of his form. With his second he dropped two yards from the pin and sank his ball for 3. Ray, after passing with his third, rolled round the back of the hole and took 5. But for these mistakes he had looked a sure winner, as it was these holes almost meant his defeat. On the last green both lay about eight yards from the hole with their tee shots. Ray, who was within inches of the back bunker, went down in 3. Duncan with a putt to win the match, ran up a beauty, which hesitated on the lip. The match thus ended with the players equal at 67. Duncan’s return card showing the excellent score of 32. The scores in this match were :-

Last recorded 1917. Some of the land was acquired by the council for housing in the 1930s.