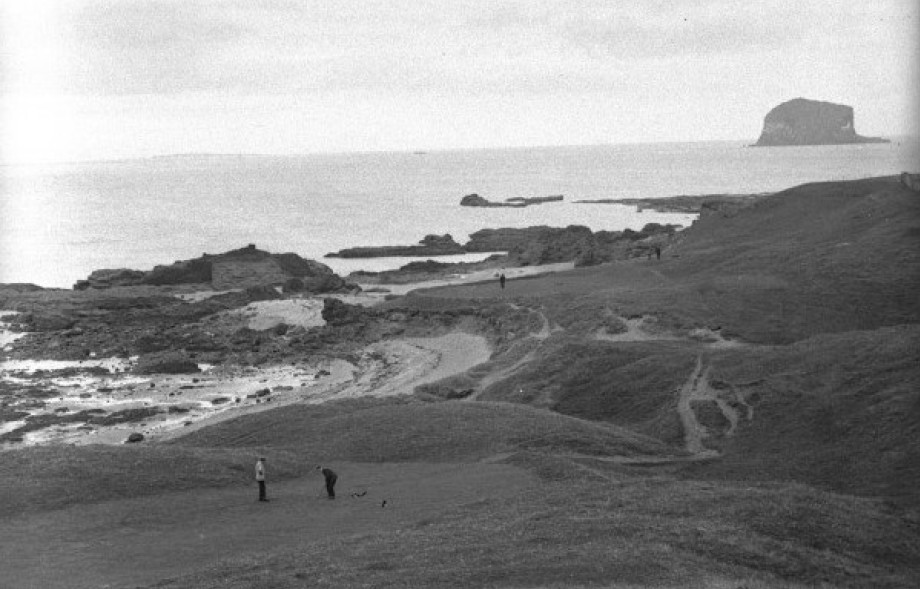 “There is an opportunity at present of obtaining from Sir Walter Hamilton Dalrymple facilities for golfing over the ground between the Rhodes Farm and the sea known as the ‘Rhodes Links.’ ‘These Links being on pasture-land with a fine quality of turf, can, it is believed, he converted into a golfing-green at a moderate outlay. The Rhodes Links extend to about forty imperial acres, and Bernard Sayers, who has inspected them, reports that there will he no difficulty in laying out a long nine-hole course with good natural putting-greens and hazards.

It has occurred to the undersigned that the opportunity thus afforded should not he allowed to slip by the residents of North Berwick, to whom the existence of a good nine-hole course so near as the Rhodes Links would he a great convenience. Apart from that, there is no doubt whatever that the attraction of a good course in such a situation would increase the letting and selling value of the houses in the town.

It is estimated that a sum not exceeding £150 will he sufficient to lay- the greens and Lit the course in such order as will enable golf to be played early in the autumn, and it has been ascertained that the proprietor will grant a ten years’ lease of the Links as a private green at a nominal rent.

Although the opening of the Rhodes Links as a private green would primarily benefit the residents in the east end of the town, it is anticipated that many- of the principal residents iii the rest of the town, interested in golf, will be glad to support a scheme which would relieve the present North Berwick Links by providing a private green where, when the greens at the west end of the town are overcrowded (as is often the case in the summer season and on competition days and public holidays), golf could be played in comfort.

In the event of the scheme proceeding, it is not proposed to erect anything of the nature of a clubhouse. All that it is thought would he required would be a box for the green-keeper, with a suitable wooden hut as a shelter in bad weather. The sum subscribed will therefore be devoted almost entirely to the laying-out and improvement of the green.”

This circular was signed by the Right Hon. J. B. Balfour, Principal Rainy, Professor Blaikie, Provost Brodie, and Messrs J. McLeod, R F. Shaw-Stewart, and Sidney L. Lane, most of these being feuars in the east end, some on the very part of the East Links which had formerly been golfed over by the burgesses of the town. On 8th February 1894 it was announced in a second circular that a lease of the ground between Rhodes Farm and the sea had been taken from Sir Walter Hamilton Dalrymple, Bart. and ‘a capital nine-hole course, with natural putting-greens and hazards, laid out’; also that a club had been formed, to consist of not more than 150 members, the entry-fee of which was £1, and the annual subscription the same amount. Life-membership was to be acquired for payment of £25. Of this club Mr. C. L. Blaikie and Mr. R. M. MacKechnie were appointed joint-secretaries. The committee appointed consisted of the following gentlemen:—Sir W. Dalrymple, the Right Hon.. B. Balfour, Q.C., M.P., Messrs. R. F. Shaw-Stewart, John Oswald of Dunnikier, B. Hall Blyth, anti the joint—secretaries. The members of the Honourable Com pany of Edinburgh Golfers, the North Berwick Club, and the New Club, North Berwick, were told that they were all eligible for membership, and about fifty names were obtained to give the club a hopeful start. The new green was opened on 16th April 1894, Sir Walter Hamilton Dalrymple striking off the first ball before a large and fashionable company, which included Lady Dalrymple and numerous other ladies. Ben Sayers and Hugh Kirkaldy played two rounds to inaugurate the green. Ben ran away from his opponent with a lead of five holes, but Hugh pulled himself together, and after some very fine play succeeded in winning the match by one hole. In the afternoon a foursome was played, B. Sayers and Mr. J. McCulloch against Hugh Kirkaldy and Mr. R. T. Boothby, which made a St. Andrews v. North Berwick match. Sayers and McCulloch won by five up and four to play. 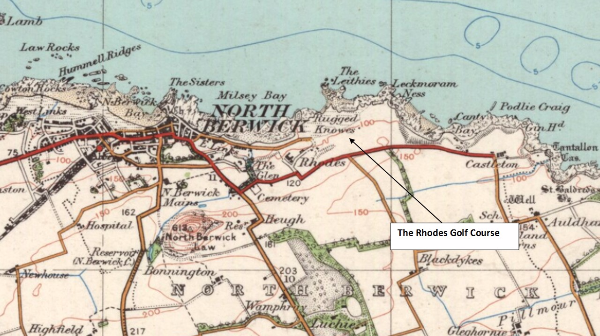 The distances of the holes at present are approximately:

The Rhodes course is undoubtedly a sporting one; and as for scenery, nothing better can be desired, while the sea-breeze is even fresher and more invigorating than on the western course. A writer in the Scotsman of April 30, 1895, has the following excellent account of it:- 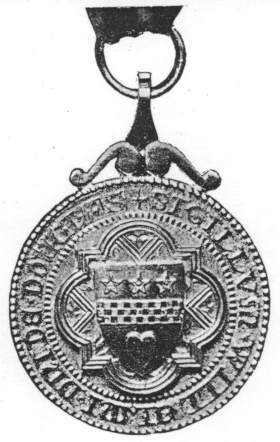 “From time immemorial North Berwick has been celebrated for its golfing-green bit now it call boast of more than one, for besides the numerous extensions of the old green to the west that have been made from time to time, and are making even now, its eastern end, as the readers of the Scotsman know, has been raised to the dignity- of having a green of its own. This privilege it owes mainly to the enterprise of the lord (if the manor, Sir Walter Hamilton Dalrymple, who had the genius to see a possible golf-course in a piece of ground on an elevated plateau, between half a mile and a mile ill length, running alongside the cliffs on the way to Tantallon Castle, so rough and irregular by nature that ill the Ordnance Survey map it hears the name of the Ragged Knowes.

Between the start and the second hole thieve is not much to notice except the beautiful carpet of cowslip and primrose which nature has provided, but which might well be dispensed with for the game of golf. Arrived at the second hole, which stands high, one should take a deliberate view all round, for this is the most extensive that the course affords, and it brings into full view the Kingdom of Fife, from the East Neuk on the right to the Lomonds on the left. Of so familiar a view it is not necessary to say anything here. From the third to the fifth hole the course is close to this cliffs, and we may study this fantastic forms of the Leithies, the Yellow Man, and Leckmoran Ness.  To reach this next hole you descend from the plateau to near the sea-level, happy if you do not land your ball on the shore. You are met by the chief difficulty of the course. You have now to regain the higher level, and if you fail by the first stroke to place your hall on the green at the top of the brae, no mortal can tell how many more strokes you may require. If it falls short, however slightly, it has us teasing way of rolling down to your feet, and of repeating the trick as often as you repeat the stroke. From this green there are but two holes to the end.

One hour completes the round; if you have played to your satisfaction and drunk in the scenery besides, you must be happy.

For the less advanced class of players, for all who shrink from the publicity of a crowded green, or who find a two hours’ course exhausting; for ladies, and for young people who neither like nor liked to be in this way of their elders, the Rhodes course will prove a great boon, all the more that it occupies such a choice situation.

The future of this club is in doubt.  A look through the minute-book does not give a hopeful view, for there we hear of balances on the wrong side, liabilities increasing and assets lessening, and one of the original committee bluntly proposes that the whole business be at once wound up.  But Sir Walter Dalrymple himself is hopeful, and looks forward to the day when the course will be one of eighteen holes and unsurpassed.” (GBEL 1896)

The course failed to attract enough members and visitors and by 1905 the Town Council had taken steps to acquire the course and sufficient adjacent land to form a new 18-hole Burgh Links. In 1906 the North Berwick Corporation Golf Club was formed, and the new course formally opened on 2nd June 1908. In 1930 the Club was renamed the Glen Golf Club.