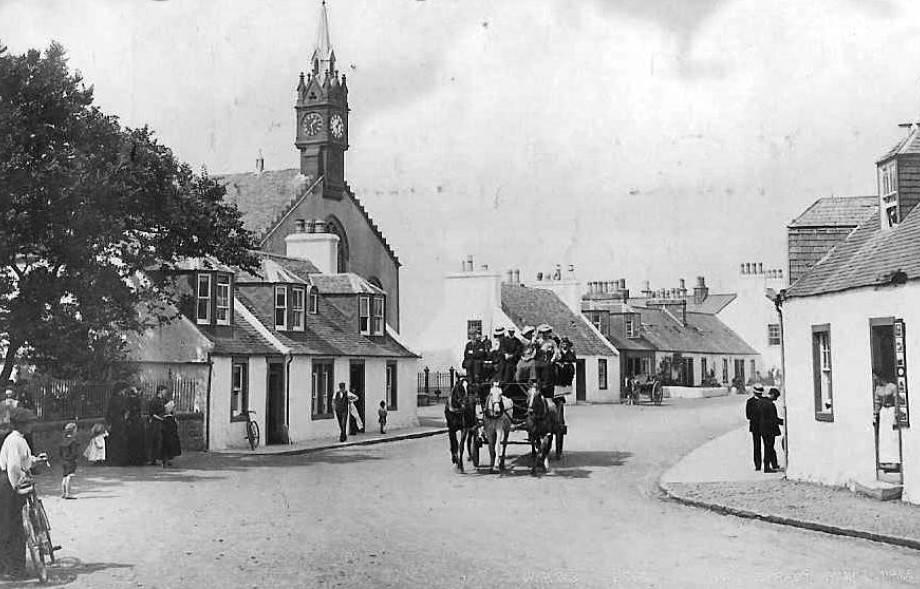 Heading for the golf course

Founded 1877.  Started with 8 holes but became an 18-hole course alongside the beach at Balig, a quarter of a mile from the village.

The Formation Of The Club

At an adjourned meeting held here on Saturday last, it was resolved to institute a golf club, when 33 members were enrolled. David MacGibbon, esq, of Laggan, who has taken a very lively interest in the formation of the club, was unanimously elected Captain. The meeting having heard with much gratification a letter read from the Earl Of Stair, expressing approval of the object of the meeting and requesting to be enrolled as a member, it was unanimously agreed to ask his lordship to become patron of the club. Mrs Murdoch, Alton Albany, presented a very handsome medal for competition. The Captain and the Rev. Mr Williamson also presented prizes, which were played for immediately after the meeting, when ten couples started over the links, which were found to be admirably adapted for the game.” (AA 18.10.1877) 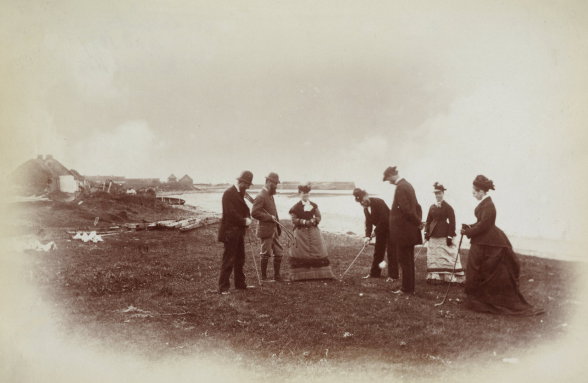 An early group of golfers at Ballantrae, and i don't mean in the morning !!

Permission has been granted to extend the golf course as far as the Duhorn Shore. This will give an addition of at least six holes, and make a course of nearly 3 ½ miles round. It will cost a considerable amount to lay out the new ground properly, but the committee have received several liberal promises of support. We may at no distant date see Ballantrae with a golf course equal to any in the county.

Ballantrae Links, have, within the last two years, been greatly extended, by almost a mile. In December of 1891 Thomas Ramsay, of Troon, was engaged to make considerable alterations and improvements, under the direction of William. Fernie. In the month of August last it was resolved still further to extend, widen, and improve the links, and Mr. Donald Henderson was appointed greenkeeper, with power to get the extension and other contemplated improvements properly carried out, hopefully by June. The result has been very satisfactory so far.

The links are of the most varied and sporting description, mainly composed of the famed Ayrshire turf, comparatively free from "traps," but abounding in hazards-sand bunkers, burns, ditches, and dykes guarding the holes.  The approaches are well attended to, and an accurate game may be depended upon. The best greens are "Knockdolia" a plateau loft. high, forty yards long, and fifteen yards in diameter; "Majuba Hill circled by a burn with precipitous sides; "Half Way,"  defended by two ravines, with a good "lie" between; " Neck or Nothing," or Hally's Circus, intersected by the windings of the Bed Burn, which a player may do in 3, a novice in 30; The "Saucer" and "Purgatory," out of which, there is no redemption. 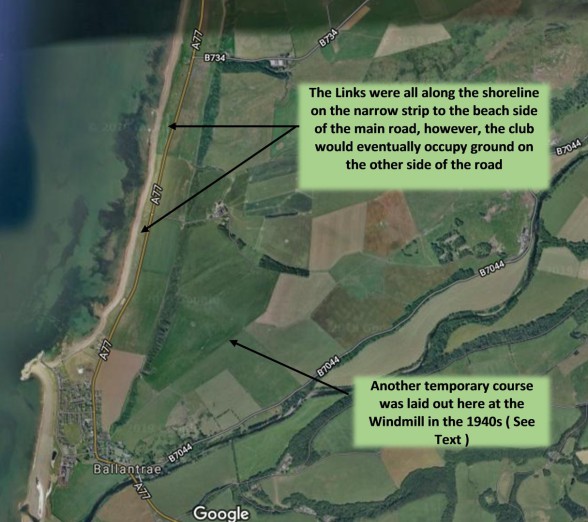 The view from the links embraces part of the Atlantic, and ranges from Corswall Point to Arran, including Ireland Ailsa Craig, and Kintyre. The golf house, which contains boxes for members, is within a quarter of a mile of Ballantrae village, where there is excellent hotel, from which, morning and evening, 'busses run in connection with the trains from Pinwherry station.  There is also, in summer, daily communication with Girvan. The latter station is thirteen miles distant, the former eight and a-half.” (GA 1892-93) 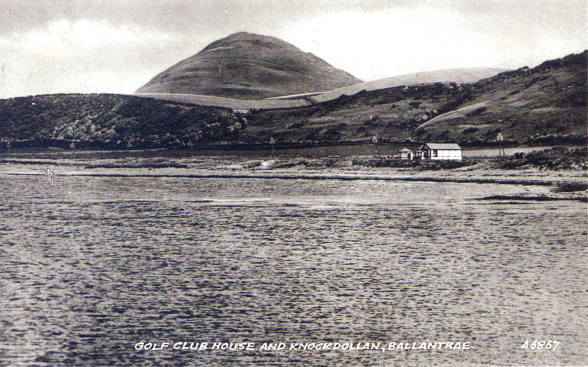 The course is close to the seashore.  The holes are well guarded and the turf is very good and springy generally." ( Nisbet's Year Book, 1907)

On splendid springy turf, kept in excellent order, the abundance of well-placed natural hazards to be negotiated lend a pleasing variety to the course."(Who's who in golf ).

A new clubhouse has recently been erected.” (Golfing Resorts of the Glasgow & South Western Railway, 1922)

The course had always been unusually narrow, with a main road bordering closely, and then bisecting, the  course. A greatly increased traffic flow, and other strictures arising from WW2, made play increasingly difficult and the club eventually closed in 1944. There was an attempt to revive it in 1947 and a nine-hole course was laid out on the Windmill. However, despite all the efforts there were never sufficient members to keep the club financially viable and it was wound up in 1951. 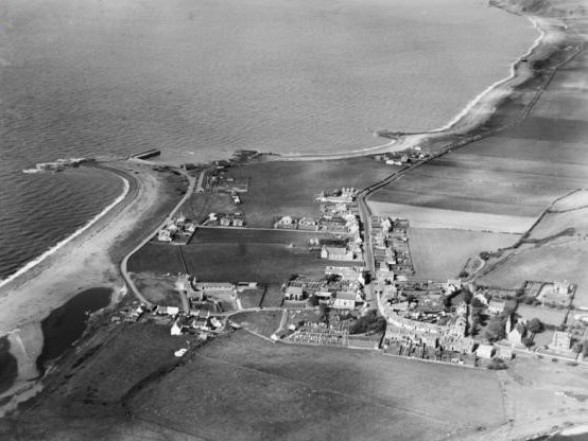 As the above text suggest, the course was rather narrow as you can see from the photo, with the course running along the shore at the top right of the picture with the main road running alongside and intersecting the course. 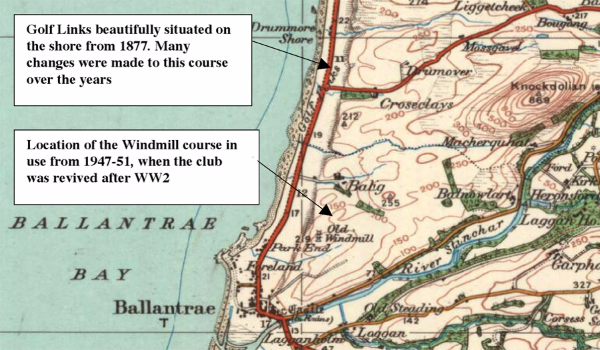 “The annual general meeting of the club held on 24th November 1950 was attended by eight members, including two lady members, there were four apologies. This only goes to show how interest in the club had declined, part of that may be due to the land being in need of decent drainage and the fact that whilst the Ministry of Agriculture were not averse to golf being played over the ground the land still had to maintain sheep and cattle no doubt due to food shortages after the war. This would not have been popular with the golfers who would be looking for decent greens to putt on. It was decided at this meeting to dispense with full time staff and rely on temporary workers. The close proximity to Girvan and Turnberry golf courses would not have helped, in fact, the Bargany cup held annually over Turnberry was historically open to members of Ballantrae golf club, Girvan golf club and of course Turnberry.

At a special general meeting of the club and subscribers held on Tuesday 3rd April 1951 the chairman and club captain the Hon. Hew Dalrymple advised the meeting that lack of interest by golfers, both local and visiting was the reason for the club’s precarious financial position. After a discussion it was decided that to carry on with the club ‘ would be imprudent ‘ and arrangements were made to dispose of the club’s assets. The final meeting of the Ballantrae Golf Club New Course Committee was held on Thursday 11th. October 1951 when it was agreed to accept the offer of the Colmonell bowling club of £210 for the clubhouse. The various implements were sold off and it was decided to leave the golf trophies in a bank in Girvan where they are still held.” Extracted from “A History of Ballantrae and Girvan Golf Clubs” and included with the kind permission of the author, William Tait. 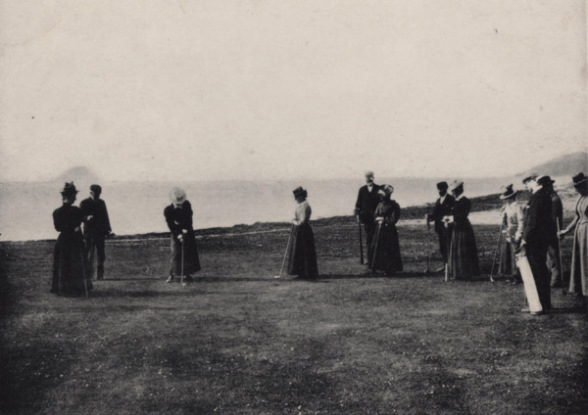