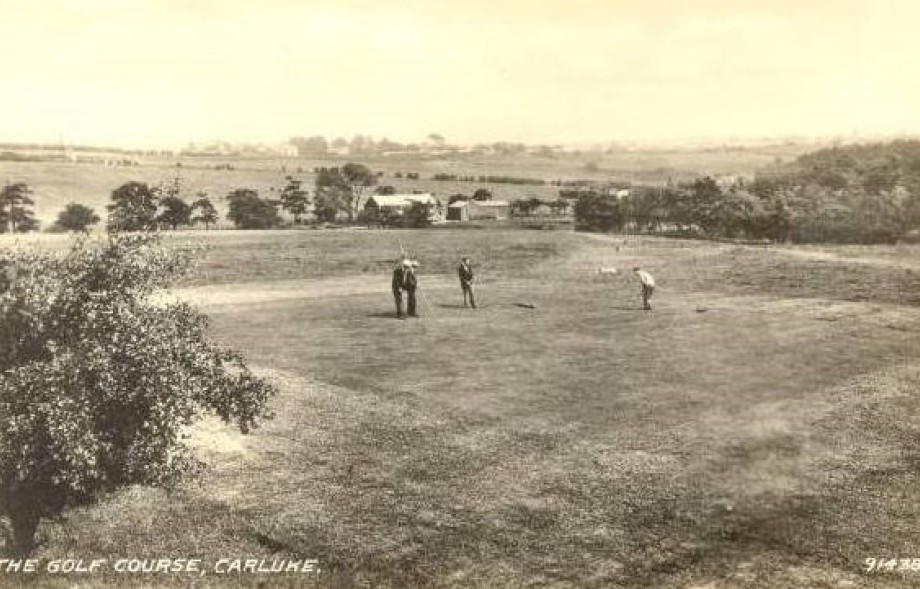 The club are now on their 3rd course. Previous sites were :-

The club have occupied their present site at Hallcraig since 1910 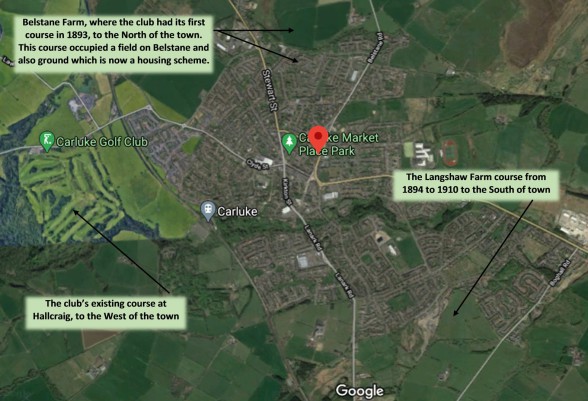 The three locations with the help of my friends at Google

A meeting of those favourable to forming a golf club was held within the Town Buildings, Carluke, on Tues evening - Mr R.Pil¬lans presided. After discussion, it was finally agreed that, considering the small attendance and the inability of knowing how many would be likely to join a committee - consisting of Messrs A.Murray, J.Kelly, and R.Pillans (convener) - was appointed to look after a suitable course and see price of same, also to try to get members. The meeting was then adjourned till Monday 2nd October, to hear report of committee and give those who could not possibly attend at this time another opportunity. 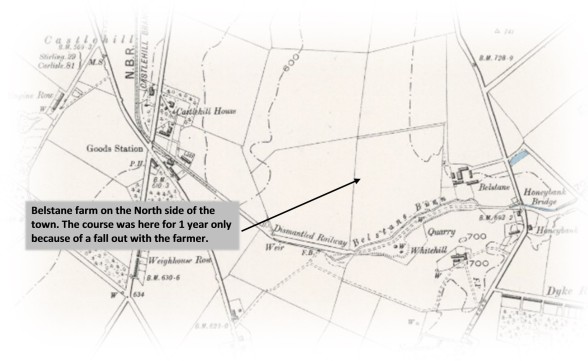 Folowing upon the preliminary steps taken by several gentlemen to form a golf course at Carluke, a club has been instituted. To the Hon Presidents who have been pleased to give their patronage the members of committee are deeply indebted.

Last Saturday, Mr Forgan, the well known golfer, played over the ground, and was of opinion that the Carluke course would prove a popular one. The hazards are plentiful, while some of them to any but a first-rate golfer, will be difficult to surmount, and tend to a good deal of sport. The player in driving to the "Syke",a distance of 195yds, has to find his way into a hollow on the edge of a small stream. In going thither two bunkers intervene - the first especially, in the shape of a rough hillock, will prove a source of considerable annoyance to the player who may chance to "foozle" his ball. In taking "Mount Zion", the golfer has to play all he knows in order to drive over a lofty eminence, and then along the base of the hill with hazardous surroundings, which, if he fails to take properly, will give him much trouble to extricate the ball, only to find that the approach to the green on the edge of a deep gully must be very carefully taken ; distance 210 yards. In playing the "Simplon Pass", 212 yards distant, the  golfer must studiuosly avoid the gully intervening on the left, and drive ahead, straight along a narrow pass between a high wooded knoll and the public highway. If the ball be driven too strongly, it will be badly trapped in a quarry which lies hidden in close proximity to the green. Hole No.4, the "Keblah", (a word signifying the point towards which the Mohammedan turns his face in prayer), has been so named from the fact that two formidable hazards present themselves, from which the golfer may well pray to be delivered. Fifty yards in front of the tee a steep (hill?) rises to a considerable height. A slight mistake will land the player in difficulties. Should he succeed in clearing, he must drive with great precision in order to avoid being bunkered along the highway to the right, and if he chance to go indifferently to the left, the gully will swallow his ball, which may then be regarded as a lost one, as far as playing out is concerned.

In playing to the "Moat", at which at a sort of ditch and rampart lie behind, the gully, 40 yards of a gap across, must be cleared, and then the play is open afield - the distance, 150 yards. The remaining drives - to the "Mound", 170 yards, on to the shoulder of a conspicious ridge ; the "Norther", 175 yards, driving north ; the "Blackey", 270 yards, to the base of a black hillside ; and, "Home", 256 yards, present several bunkers on the way, but the play is comparatively plain sailing over fine undulating ground. The average distances of the holes is over two hundred yards. A considerable number of players has already joined the club. The membership fee is very moderate, and when once the greens are properly put in order the course will certainly gain in popular favour. Golfers will find the situation of the fields very attractive, with bracing air and from the uplands a fine prospect of the surrounding country. It may be safely said that for variety of play and real sport, the Carluke golfing ground, as an inland course, could not be surpassed.

Golf : Last Saturday, several golfers played over the course doing their level best to make a good record. The honour of going round with the best score yet accomplished fell to Mr Marshall, medal holder of the Hamilton club. He completed the round by taking only 45, showing good form, while his style and fine play were greatly admired.

Golf : Yesterday, two members of the Lanark Junior Club played over the new golf course at Carluke. They were exceedingly well pleased with the many fine hazards, and expressed the opinion that when the greens were in proper order the course would be pretty near an ideal one. Mr Malcolm Johnston, secy of the L.J.C. managed to beat Mr Marshall's record by four, his score being :

On saturday afternoon the new golf course of the carluke club was formally opened.The weather was favourable although threatening.The course is situated within ten minutes walk of carluke railway station.The greens were in good condition.The president Mr R. Pillans introduced the Rev. D.L. Fraser,who in a most felicitous speech,spoke of the good prospects and vitality of the carluke club.After the course had been declared open,Mr Russell, lilypark ,photographed the assembly of ladies and gentlemen present.Play was led off with a very fine drive by Mr James Andrew, who was accompanied by other well known players from the prestwick club,viz,Messrs John Andrew,C.J.Hibet,and T.Weir. A large following of spectators witnessed the fine play of the visitors.The play was very enjoyable,and everyone seemed to be pleased with their days outing. 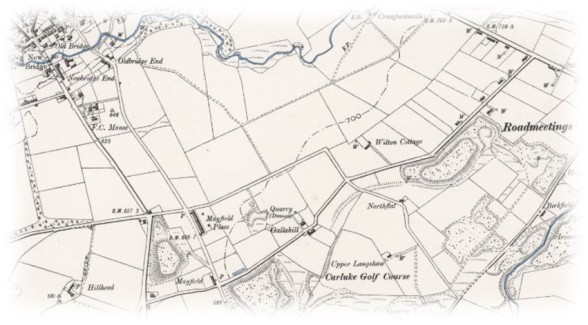 The second course at Langshaw Farm, some two miles away from the first course. This course was located near to the Braidwood Railway Station to the South of Carluke.

The splendid weather experienced throughout the week and at the close of last week,coupled with the enthusiasm shown by the members of carluke golf club,has created a desire in the breasts of the rising generation of the town to follow their elders. For some time past the golf course has been a favourite resort of the youngsters,who have studied well the ways of their seniors,and now,initiated into the rudiments of the game,have commenced it"s practise themselves.They do not limit themselves to any place,as anywhere even the streets are utilised,although market place seems to be the favourite,judging from the numbers to be seen there in the evenings. As showing the ingenuity of the carluke youth,it may be mentioned that walking sticks constitute the majority of the clubs,while marbles,stones etc.come in nicely to those whose pockets forbid the purchase of a ball. The true formula of the game is not followed,but it appears to be all the more interesting to the players on that score.

Golf Trophy: The officials of carluke golf club have received a handsome silver challenge cup to be competed for annually by singles at the clubs handicaps odds. The cup bears the following inscription: Anstruther Cup presented by W.C.Anstruther Bart,1894. In addition the donor has generously offered to present a badge annually to the winner of the cup as a souvinir of his victory. We understand that the members of the club are about to compete for a valuable prize given by J.G.Chrystal,Esq. Waygateshaw ,and a competition will take place among the lady members for a fine club presented by Mr Gibb Hallgraig.

While playing over the course the other evening,Mr J. Marshall had the nine holes in 36,which is the record -- The best previous score being 38,which was made by the same gentleman. Mr Marshall with 77 also made the record for the double round.

Carluke Golf Club ; The formal opening of the golf course took place on Saturday last, when a mixed foursome match was engaged in by sides representing the president (Mr J.K.Barr, M.A.) and the vice-president (Mr John Pillans) . About twenty couples took part in the matches, which resulted in a win for the vice-president by 4 matches to 2. Tea was afterwards served in the clubhouse. After the match, Mr J.K.Barr, having expressed his pleasure in seeing so many present, spoke of a possible extension of the course, but stated that nothing definite had been ar-ranged. He also referred to the new rule regarding the playing of ties within a fixed time, and concluded by moving a vote of thanks to the ladies who had taken charge of the tea.

A special general meeting of Carluke golf club was held in the Lesser Town Hall on Tues. evening. Rev Robert J.McCluskey, president of the club, presided over a good attendance of members. A report was submitted from the club committee, showing that after some negotiations they had taken a lease of Hallcraig Estate from the Coltness Iron Co.,Ltd. with a view to having it laid out as a golf course. The meeting unanimously approved of the committee's action. A committee was appointed, having full powers as to the preparing of the new course and any other business that might arise in connection with the transaction. Hallcraig estate con¬tains about 200 acres of ground, which, during the last few years, has been used for grazing purposes alone. 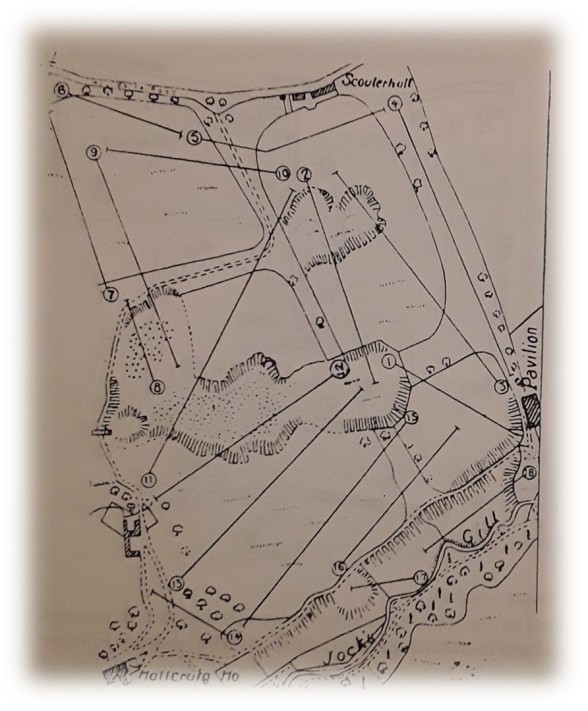 The Hallcraig Layout In The 1930s