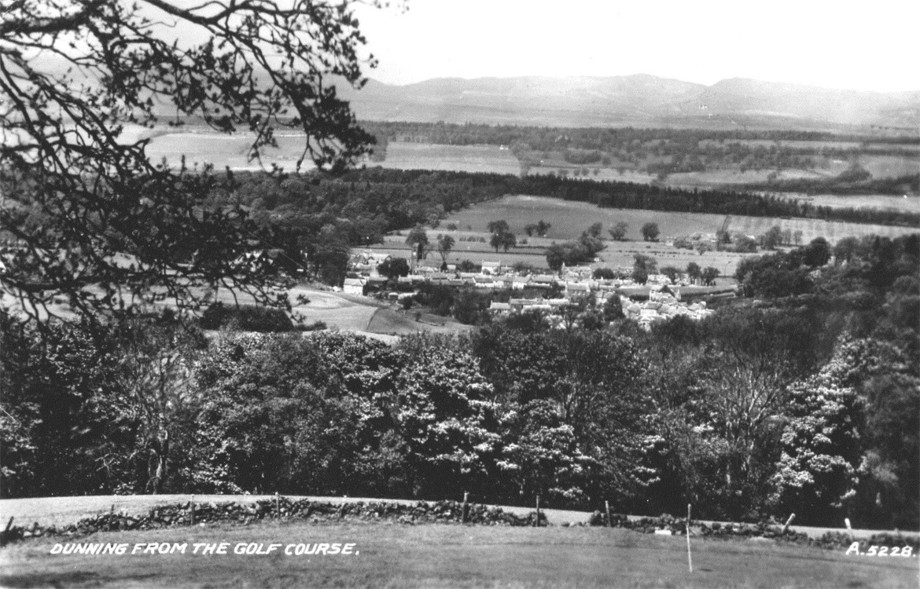 Dunning Golf Club (1). Founded 1906. The Club had three courses, the first at Kincladie Cow Park, the second at the Mains of   Pitcairn Farm, which closed with the onset of WW2. The third, formed in 1946 was in Rollo Park. The current club was founded in 1963. 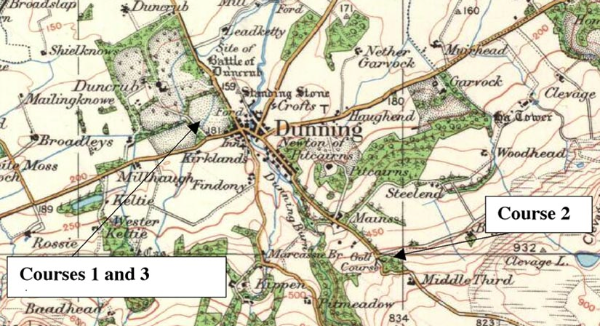 "A meeting of those in favour of forming a golf course was held in the Town Hall last night. There was a fairly large turnout of the public, and on the motion of Dr Thomson, M.H. Lawson Esq., was appointed chairman. The chairman, in a few remarks, mentioned what had already been done or suggested ; that the Kincladie Cow Park, better known as the “ Haughs” had been secured at an annual rental of £5, and that with an outlay of £15 or so a fairly good course could be laid out.

A draft of the proposed rules was also submitted, which showed that the membership dues were to be 7s 6d for gentlemen and 5s for Ladies, a scale of visitors charges being also read.

After a general discussion the rules as drawn out were adopted, and a committee formed as follows:- Captain, Rev. R.S. Clazy, M.A., Secretary and Treasurer, M.H. Lawson Esq. Bank House; Committee, Mr Wm. Kerr, Mr James Dougall, Mr John Howie, Miss Martin, and Miss Eliza Cunningham. The meeting was a very enthusiastic one, nearly 40 Ladies and Gentlemen handing in their names as members. On the motion of Mr James Dougall, a cordial vote of thanks was awarded to Mr Lawson for so ably conducting the meeting" 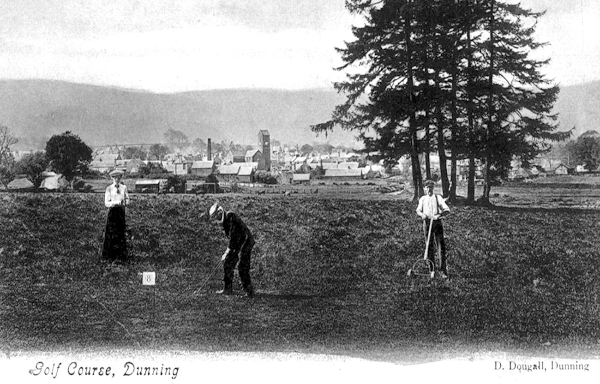 "The new course of the Dunning Golf Club, and which is situated in one of the large parks on the farm of mains of Pitcairns, was opened a week past last Saturday. Owing to the rough nature of the pasture and other causes the members of the golf club were forced to evacuate the course which was laid out last year at considerable expense.

The course now aquired, although a little further from the village, is well adapted for the Royal game, the turf being of a springy nature. Temporary bunkers are to be put down, and no doubt when the work is completed the course will compare favourably with others in the vicinity. In presence of a number of the members the Hon. Miss Rollo drove off the first ball, and formally declared the course open for play. Mr Wm. Kerr, M.A. in the name of the club, thanked Miss Rollo, not only for her presence there that day, but also for the great interest she took in the welfare of the club. The weather being very wet and stormy, all present adjourned to the farmhouse of Messrs Angus, where a sumptuous tea was handed round to all, a most pleasant evening being spent."   (Perthshire Advertiser 1.5.1907)

"The committee of Dunning golf club have decided to re-construct the layout of the golf course, as the present line of play has not been satisfactory. Under the new scheme most of the present greens will be utilised, but many of the fairways will be reversed. It is considered that the new line of play will not be so hard on the players, and that better scores will be returned."   (Dundee Evening Telegraph 14.10.1925)

"In 1946 Lord Rollo of Pitcairn gifted the villagers the Alley Park to be used for all sporting and recreational purposes, it was to be named the Rollo Park. A new committee was formed and at the cost of £3 a plan was drawn up by Joe Anderson of Perth to create 9 holes. After a great deal of hard work, sweat and toil a course was laid out.  Joe Anderson’s daughter Jessie Valentine became one of Britain’s most successful lady golfers between the 30’s and the 60’s.