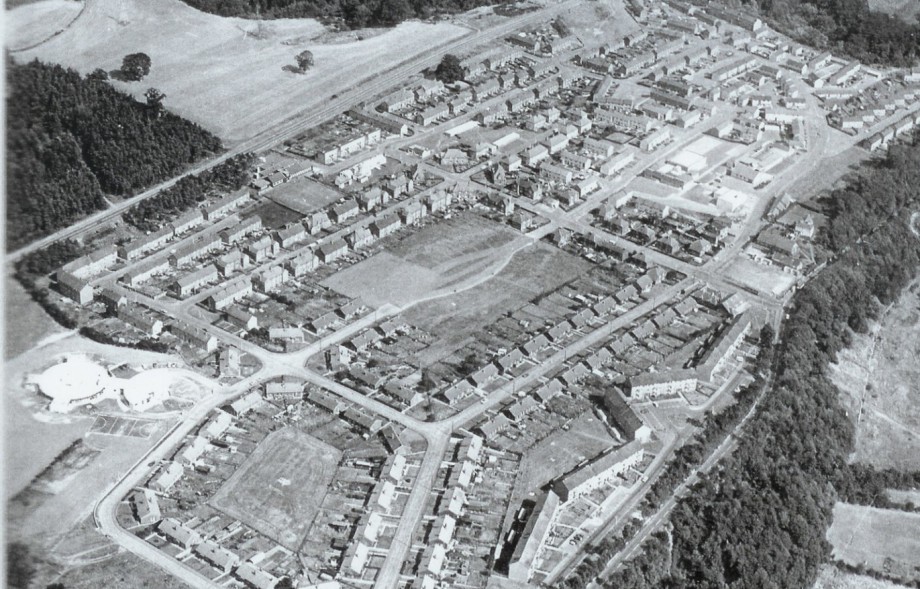 High Valleyfield with the course in the top left hand corner

Valleyfield Golf Club. Founded 1922. Good progress having been made with the construction of the new golf course at High Valleyfield, its formal opening took place on Wednesday afternoon. The weather was gloriously fine, and a large crowd assembled at the first tee to witness the ceremony. The President, Mr Potter, introduced Mr J. Dewar, The Lindens, who in a short speech, said the new golf course undoubtedly supplied one of the missing links in the outside life of the people of the district.

He wished the club success and prosperity, and had much pleasure in declaring the course open. Amid cheers, Mrs Dewarthen drove the first ball. Mixed foursomes were engaged in during the afternoon. The winning couples were:- Miss Murray and Mr Prentice, Secretary of the club; 2. Miss Peacock and Mr G. Sinclair. Gentlemen – 1. Messrs J. Spowart and W. Docherty; 2. Messrs L. Lawson and T. Ross.

Tea was served under the trees in the evening, when the President thanked all the ladies who had so kindly contributed to the success attending the opening, and also announced that Mr Dewar had gifted a rosebowl for competition amongst the ladies, and Mr Moir, Dunfermline, a gold medal for Gentlemen. The days arrangements passed off without a hitch. Possessing a strong membership, the club has made a most auspicious start." (DP 10.6.1922)

"The new golf course was opened last Wednesday afternoon before a large company. Mr Potter introduced Mr Dewar, who performed the opening ceremony, while Mrs Dewar had the honour of driving the first ball. The course lies to the South of Valleyfield House, which was at one time occupied by Sir George Younger, and has now been granted by the Fife Coal Company, Ltd. A game was played after the opening ceremony, which was won by Miss Murray and Mr Prentice. After the competition tea was served on the course." (WFE 14.6.1922)

"A sale of work was held in Torrieburn Hall on Saturday 24th April,on behalf of Valleyfield and District Golf Club. Mr Calder, agent for the Fife Coal Company in this district and president of the golf club formally opened the sale. The result was very satisfactory, a sum of £80 being realised. Great credit is due to the ladies, who took an active part in the scheme and to the many subscribers, to whom the committee gratefully acknowledge their indebtedness. During the sale excellent music was supplied by Mr Nivens Jazz Band." (DP 9.5.1925)

"On Tueday evening at Torrie Hotel, Mr Mathew McLuckie, the esteemed secretary of Valleyfield and District Golf Club, was met by a large company of clubmates and friends prior to his departure to South Africa. Mr H. Calder, President of the club, who occupied the chair, voiced the sentiments of those present in expressing the regret felt at losing such an energetic and enthusiastic office bearer and called upon Mr J. Brown, Captain of the club, to hand over to Mr McLuckie a few parting gifts which had been subscribed for by club members and friends. The gifts comprised a travelling rug, case of pipes, and fountain pen. A delightful evening was spent with song and story, the following gentlemen contributing to the programme:- Messrs Brown, Buist, Calder, Cameron, Cook, Duncan, Kidd, McLuckie, Miller, A. Mitchell, J. Mitchell, McNeil, McMillan, Russell, and Sommerville. Mr and Mrs R. Clark officiated at the piano. The singing of “ Aul Lang Syne” and “ Will Ye No Come Back Again ?” brought a memorable evening to a close." (DP 11.9.1926)

"The opening match of the season of the Valleyfield and District Golf Club was played over their course under ideal weather conditions. There was a splendid attendance of members and everything augers well for a most successful season. Singles matches were indulged in, and Mr Caldwell secured first place with a score of 42.

A splendid programme of matches and competitions has been arranged by the committee who are hoping to place the club in a prime position among the devotees of the Royal & Ancient game in Fife." (DP 14.5.1927)

There is some uncertainty as to the corresct name for the club. The local Press were reporting it as Valleyfield and District Golf Club from 1925 but the Golfers Handbook, which received its annual updated from Club Secretaries, cqlled it Valleyfield Golf Club from the same date, through to 1938, the last time the club appears in the book.

"During the last week the golf course at Vallyfield has been much frequented by members and visitors. Not since the course was opened has it attracted so many players, and there have been additions to the membership." (DP 4.6.1927)

"During this week the local golf course has been a great source of attraction. Taking advantage of the spell of splendid sunshine, both members and visitors engaged in the sport with much zest. The greens are in splendid condition, and the committee is now concentrating on the fairways. The best score recorded this week was 74 by Mr J. Walker.   (DP 18.6.1927)

A former mining village midway between Dunfermline and Kincardine, High Valleyfield is situated on an escarpment, above Low Valleyfield, on the coast of the Firth of Forth. The village was built in 1941 after Valleyfield House was demolished on part of the Valleyfield Estate. 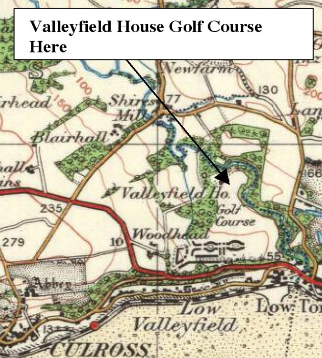 A former mining village midway between Dunfermline and Kincardine, High Valleyfield is situated on an escarpment, above Low Valleyfield, on the coast of the Firth of Forth. The village was built in 1941 after Valleyfield House was demolished on part of the Valleyfield Estate.