Rothiesholm Links. The course appeared in the 1890s at Rothiesholm, on the west of the island.

“The annual visit of Orkney Golf Club to Rothiesholm Links took place on Saturday, Over 100 golfers and their friends spent a most enjoyable day. The weather was most beautiful and the greens in good order.”    (Aberdeen Journal 18.6.1899) 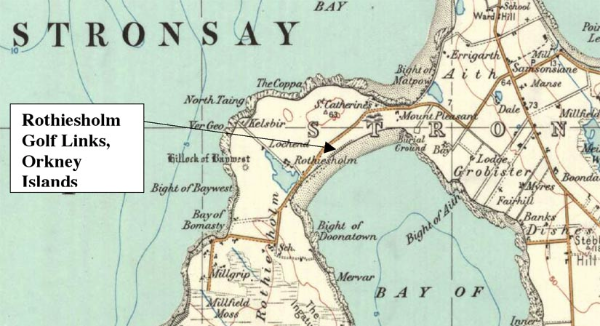 Golf Course to Be Laid Off

The Maggie Kerr landed a cargo of slates here last week, a good part of which was for Mr Sutherland of Rothiesholm. We are glad to see that he is taking a very practical interest in his tenants by getting new houses for a lot of them. We are also glad to learn that he has arranged to lay off a golf course on his property, and we are assured by competent judges that the course will make one of the best in the North of Scotland, and will prove a boon and a benefit to the island.

On Saturday the members of the Orkney Golf Club went to Stronsay, chartering the S.S. Fawn specially to convey them. The weather was all that could be desired. The new course recently opened by Mr Sutherland at Rothiesholm was thoroughly tested and all agreed that it was an excellent one. Singles were first played. Prizes were given by Messrs Sutherland, Buchanan, and Gold, and were won by the Rev. D. McDonald, and Messrs Jas. Slater, and H. Buchanan respectively. Foursomes were then played. Mr Pottinger did all he could to make the outing a success, and on leaving, three cheers were given for him.

Mr Sutherland, the popular laird of Rothiesholm, accompanied by a few golfing friends from Kirkwall, arrived here on Wednesday evening by the Orcadia and put up at Mr Mitchell’s hotel, where every comfort and attention is insured to visitors to this beautiful island. The party included the Rev. Mr Macdonald, Messrs McEwen, Slater, Walls, Brass, Reekie,and Flett. The weather being delightfully fine, and the links in capital order, several competitions were engaged in and keenly contested, the play throughout being of a very high order. The sporting nature of this “ Course” tests a players capabilities in an unusual degree, as anything short of clean and straight hitting is sure to be most severely punished, as more than one of the visitors know to their cost. After a most enjoyable holiday the visitors left at 5pm on Friday in the Fawn, which was specially engaged to take them back to Kirkwall. 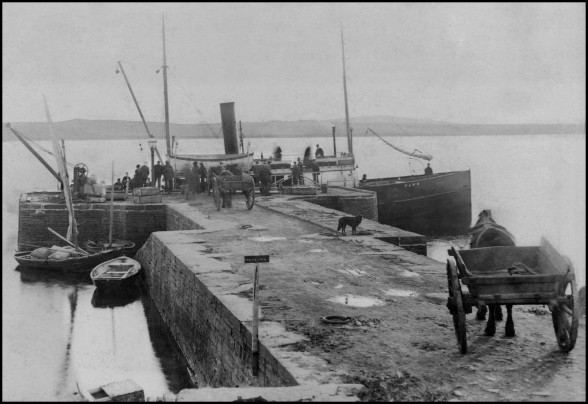 We are glad to observe that a movement is on foot for starting a golf club in the island. Last year, Mr Sutherland, the justly esteemed laird of Rothiesholm, laid off a golf course on his property. It was a magnificent course, and there has been a lot of play over it during the season. We hope the movement to form a club will be successful, and that the young people in the island will take advantage of so invigorating and healthful enjoyment.

Formation of a Golf Club

We are glad to learn that what promises to be a large and influential golf club has been formed here. Satisfactory arrangements have been made with the proprietor and tenant of the ground. The following office bearers have been elected, viz :- Mr Pottinger, Captain ; Mr Macpherson, Vice Captain ; and Serg. Donald, Sec and Treas.

Mr Sutherland of Rothiesholm has also kindly consented to become patron of the club. A set of rules have been drawn up and adopted, and four members elected to act along with the office bearers as a committee of management. The annual subscription for gentlemen has been fixed at 2s 6d, and for ladies 1s 6d. A friendly opening game has been arranged for Thursday evening first, when an opportunity will be given for those still wishing to join.

On Saturday last the members of this club and their friends had a trip to Rothiesholm, Stronsay. On arrival a competition was engaged in for three prizes, viz., a gold medal presented by Mr Sutherland, ( Vice Captain ), and prizes by Mr Shearer and Mr Hutchison. There thirty players. The prizes were won respectively by Messrs Brass, Buchanan The, and Milne. The weather was everything that could be desired, and the links and greens were in splendid condition. On departing cheers were given for Mr and Mrs Sutherland.

On the birthday of out late revered queen, the Kirkwall golf club went to Rothiesholm, Stronsay, where, by the courtesy of Mr Sutherland, the proprietor, the links were thrown open to the club. Various foursomes were made up, and, although the weather was somewhat cold, a most enjoyable day was spent. In the interest of the club, the President, Sheriff Cosens, and the Captain, Mr Sutherland, proceeded to Stronsay two days beforehand and arranged for the preparation of the green for play. The result was most successful, the course being in the best order in which we have yet seen it.

Note : Mr Sutherland, who was supportive of all causes on the island, died in November 1914.

Mr Dingwall, the champion of the fish trade, who holds the record for the Hunton course, took his departure on Friday. We wish him higher honours in the golfing world. The bailie says emphatically that the golf match between him and Joe will not take place unless they can get the course to themselves. “ He disnae want a lot o’ the lads after them.” It will be necessary for an umpire to be present and the banker to hold the stakes.

A pleasant function took place on Thursday in the fish market before a representative gathering of the village and the fish trade, when the winner of the tournament, Mr Isaac Wallace, was presented with the Stronsay Golf Club Cup. Mr Thomas Thomson won golf balls as runner-up, and Mr Lewis J. Paterson golf balls for the best handicap score of the season. In the absence of the donor, Dr Mackay, Mr George Walker acted as chairmen, and in a happy congratulatory speech introduced Sir William Darnell, who formerly handed over the prizes, accompanied by sound advice and humorous comments. The winners briefly replied, and wished their thanks to be conveyed to the donors.

A very interesting ceremony took place at Hunton Farm on the evening of Friday, 1st August, when the members of the Stronsay Golf Club called on Mr and Mrs Miller to hand over a few gifts. The Captain, Mr John Buchan, fishery officer, presided, and said that the members of the club had for long been thinking of acknowledging the kindness of Mr Miller in providing them the use of the ground, and he had pleasure in calling upon the Vice Captain, Mr L.G. Paterson, to hand over the gifts. Mr Paterson said that when the matter of subscription for this object was mooted amongst the members of the club, the response was readily forthcoming, with the result that they saw the lovely gifts before them now.

The gifts consisted with a pyrex casserole dish and stand, a gent’s dressing case, a pipe, and a mounted malacca walking stick. In handing these gifts over to Mr and Mrs Miller, Mr Paterson, on behalf of the club, wished them long life and health to use them.

Mr Miller, in reply, said he appreciated very much these tokens of the club’s gratitude and said that the club could continue to use his ground for their recreation. He appreciated very much the need of such a club in Stronsay, and was very glad to do anything he could to help. On behalf of Mrs Miller and himself, he thanked the club very much. The members were afterwards hospitably entertained by Mr and Mrs Miller.

Following the presentation to Mr and Mrs Miller on Friday night, the members of the golf club proceeded to the course, where a match, Captain V Vice Captain was held, resulting as follows :-

At the close of the match the members were entertained to supper by Mr and Mrs Miller.