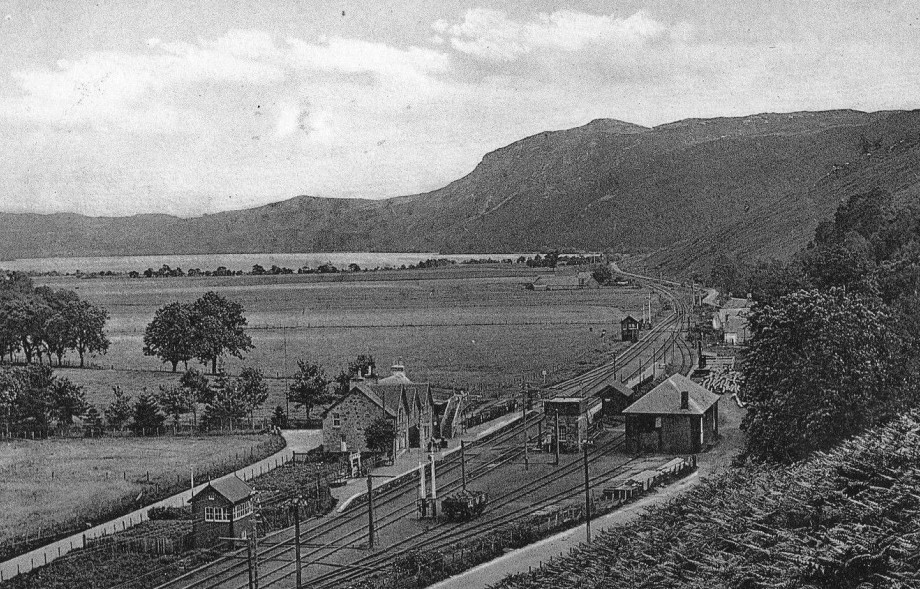 The first golf course in Garve was opened by the Garve Hotel, circa 1902, behind Hazelbrae. This fell into disuse. The owner of the hotel allowed local enthusiasts to take over the ground, and the course was re-opened under the auspicies of the Garve Golf Club in 1912. It is presumed that the club went into abeyance during WW1, but was revived in 1922 when it opened a new course on the Corriemoillie Estate.

Garve Hotel Golf Course - 1.  Circa 1902. “A nine-hole course owned and maintained by Mr MW D Mackenzie, Garve Hotel. The course was laid out by the late Chief Constable MacHardy, Inverness, and the late Chief Constable Macauley, Ross-shire, both of whom were lovers of the game, the former of whom laid out numerous courses all over the North. Latterly it fell into disuse.

"Yesterday the golf course which has just been laid out at Garve was formally declared opened for play by Mrs Stirling of Strathgarve. The course has been laid principally in the interests of local people but also give visitors who come in such large numbers to the district to fish, another means of recreation. It’s close proximity to Strathpeffer also should make it of considerable attraction to Spa visitors, who may wish to vary the more strenuous game which is afforded by the celebrated Spa course.

Originally, the course was laid out some Ten Years Ago by the late Chief Constable MacHardy, Inverness, and the late Chief Constable Macaulay, Ross-Shire, both of whom were lovers of the game, the former of whom laid out numerous courses all over the north. For some years the course was maintained by Mr W.D. Mackenzie, Garve Hotel, to whom it belonged, but latterly it fell into disuse.

Some time ago a few of the enterprising local people approached Mr MacKenzie and asked him if he would put the course into the hands of a local club. Mr McKenzie readily acquieaced and immediately a club was formed with Captain A. Stirling of Strathgarve as President, and Mr Rod MacKenzie, the energetic postman, as secretary and Treasurer. A strong committee consisting of Messrs D. Macraw, W.D. MacKenzie, Wm MacKenzie, R.J. MacKenzie, W. MacKenzie, Strathgarve and W. Martin was appointed and soon the course was being put in order.

The course, as originally laid out, was adopted, both as regards greens and tees, and within a month it was ready for play. The ground has been given free by Mr MacKenzie, and Captain Stirling- always willing to do good for the community with which he is associated- presented the club with a heavy stone roller, and in addition lent a horse to work it. The cost has been considerable but the club are confident in the result.

At present there are over a dozen members, but this number will be greatly increased now that the course is open for play.

Yesterday the weather was very propitious for golf. Though dull, the rain kept off, and a light wind made the conditions very enjoyable.

At 3 p.m. Captain Stirling and Mrs Stirling, Strathgarve arrive on the grounds where a little company had gathered on the fourth tee to take part in the opening ceremony.

Mr W.D. MacKenzie in a few brief sentences called upon Mrs Stirling to open the course and in doing so presented her with a handsome driver as a momento of the occasion.

Mrs Stirling said it gave her great pleasure to be present. She had to thank them for their handsome gift. She had great pleasure in declaring the course open and in wishing the Garve Golf Club every success- ( Applause).

Mr Rod MacKenzie proposed a hearty vote of thanks to Mrs Stirling for opening the course.

They also owed a debt of gratitude to Captain Stirling for the gift of a roller, and to Mr MacKenzie for his free offer of the park on which the course was laid- ( Applause ).

On the call of Mr MacKenzie three hearty cheers were given for Mrs Stirling. Captain Stirling then drove off the first ball amid cheers.

A foursome followed in which Mr D. Macraw and Miss Macraw were partnered against Captain Stirling and Mr Rod MacKenzie.

Description of The Course

The course lies behind Hazelbrae, and stretches along towards the Ullapool road and the old bridge leading to Strathgarve House. It is bounded on the east by the river, and the Ullapool road circles round the North and West side of till it joins the main road to Garve.

Entrance is gained by a gateway to the Wset of Hazelbrae. The first tee is at the South West corner of the course, and the line goes direct North alongside a fence, which badly punishes a “ Pulled” ball. The distance is almost 200 yards. Continuing straight ahead the second hole is reached over a stone and gravel bed, which takes the nature of a nice trap for a “ duffed” drive, and out of which it is difficult to get. The third is the trickiest hole on the course. About 170 yards long there is a shepherd’s house and a few ruinous buildings about 10 yards to the right and about 30 yards in front of the green.

To get inside the walls of the grounds, practically means forfeiting the hole. Going about 100 yards to the tee near the bridge there is a long drive of 210 yards back to the fourth hole, which adjoins the second green. This is about the longest hole.

Continuing straight ahead and keeping the centre of the course there is the fifth hole 190 yards long. The feature of this is the green which is in a hollow and on which putting is an “ Art”. The next hole 170 yards still follows up the centre of the field where the green is just short of the ninth. Except a heavy fairway it presents little difficulties. To the seventh the drive is 180 yards back to the river bank and towards the wood on the East side of the river.The Eighth hole is along the riverside and here again pulled strokes are in trouble. The home hole is a short one of 110 yards across the field.

Taken all over the course is not a long one, but many hazards present themselves to the player who fails to keep on the line. The record so far is 36 by a visitor from Aberdeen and it is a score that will take some beating. The course has been rolled with a heavy roller and with one or two exceptions the fairway is easy, but on the home journey balls that are not driven straight will find some bad lies. The greena are distinctly good everything considered. They have been nicely cut, and with attention they will improve rapidly. Only time and attention is needed to make the Garve course a really sporting little course."   (RJ 28.6.1912)

First mention1922.  Located north of the village on the Corriemoillie Eastate, where the new road (A832/835) junction to Achnasheen now is.