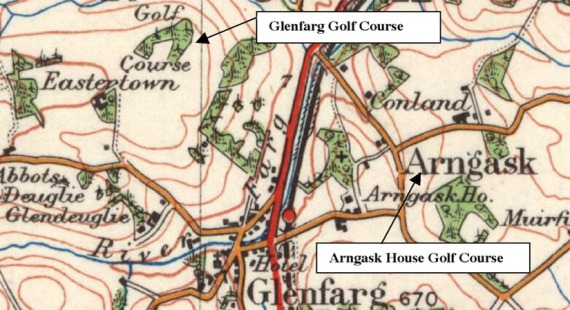 The Arngask House course was located as ahown.. Across the glen you can see the Glenfarg course as marked.

Mr Duncan Macgregor, in introducing Lord Provost Macgregor, said the inhabitants and well wishers of Glenfarg knew that place would never progress as it ought to do unless they had a golf course. Lord Provost Macgregor said he assumed it an honour to be asked by his amiable friend the Laird of Arngask to inaugurate that most beautiful and healthful golf course. Mr Macgregor had done a noble work in enabling golf to be played amid such beautiful scenery as Glenfarg enjoyed. Of all games that were practised for health or recreation golf was the Prince. (Hear, Hear.) There was nothing that could approach it for health, exhileration, or enjoyment. It suited all classes and all degrees of life. It suited the exuberance of youth, the mature strength of manhood, and even the sober steps of old age. (Hear, Hear.)

Golf was practised largely over the kingdom – far more than it was in his boyish days. The game had been planted everywhere where a community assembled and where recreation, sport, and pleasure was a chief factor in a district. Glenfarg had peculiar beauties of it’s own, and the formation of a golf course would add to those immensely. What could be finer than the scenery spread out before them ?. What could be more healthful than the breezes from the mountains ? and what could be more enjoyable or improve one’s appetite than a round at golf on the hills of Glenfarg. It was said that the game of golf was a very exasperating one, and that those who practised it sometimes gave way to certain very questionable expressions. Perhaps that was the reason why most golf courses were placed by the gentle murmuring of the sea in order to soothe down the very expressive phrases sometimes heard round a golf course. That he thought, was reflected in the fact that the name Glenfarg, poetical and mellifluous as it was, had been substituted for the somewhat prenounced name of Damhead, in order not to give any golfer  who might practise there any grounds for using swear words. (Laughter) In Glenfarg they had a most delightful resort, and in the Laird they had one of the most enthusiastic and public spirited gentleman any community could possess.

He congratulated Mr Macgregor on his public spirit, on the hopefulness he exhibited, and the certainty he showed that Glenfarg would enjoy great prosperity in the future, as it certainly deserved to do. He declared that golf ground open for all time, and said that while Provosts might come and Lairds of Arngask might go, golfers would go on for ever. Mr D. Irons called for a vote of thanks to Lord Provost Macgregor, and this was heartily accorded.

Dr Watson said he had the honour to ask Mrs Macgregor to play the first shot on the new golf course, and this she did amid applause. Mr Wyles asked all present to accord a hearty vote of thanks to Dr Watson for the trouble he had taken in laying out the greens. All recognised their indebtedness to Mr Macgregor for granting the course on such moderate terms, but at the same time he had a very excellent Lieutenant in Dr Watson, who during Mr Macgregor’s absence, had devoted a portion of his holiday in laying out the golf course. (Applause)

As the rain still continued to fall heavily very few golfers played over the course. A number of Ladies and Gentlemen were entertained to tea in the Hotel by Mr and Mrs Macgregor. The course is one of nine holes, and is within five minutes walk from the railway station. The first tee is just opposite Arngask House. There is fine old turf throughout, and the greens are in remarkably good condition. The surrounding are very pretty, and a good view of the glen is obtained. A Club – The Arngask Golf Club – has been formed, and already there is a considerable membership."

This course was pretty much a trial run to evaluate the interest in memberships etc hHowever, they need not have worried as the success of the project would lead to the formation of the Glenfarg club, with another course located just across the glen.

Closed in 1904 when it was relocated and reformed as Glenfarg GC.

The present owners of Arngask House knew nothing of the course which was once located at their front door.