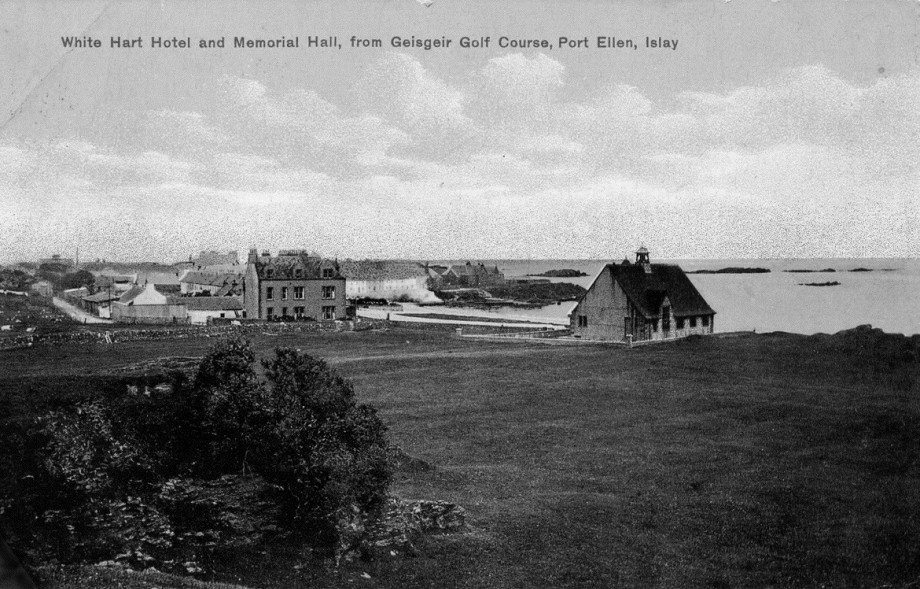 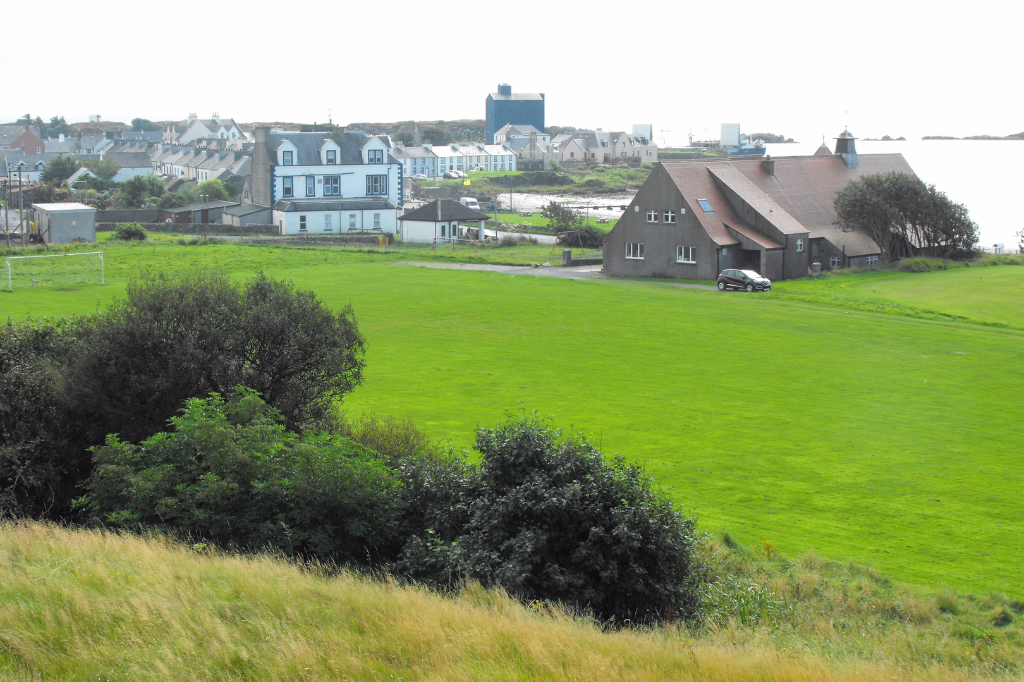 Formally opened 15 August 1908.  A 9-hole course on the lower Geisgeir lands adjacent to the White Hart Hotel, Port Ellen.  The course was relatively short with holes ranging from 137 to 305 yds but required great accuracy.  It was owned by the Misses M'Cuaig, whose father, Mr Lachlan McCuaig, was one of the chief promoters of the course at Machrie and was treasurer of the club.

The course is now part of Port Ellen Playing Fields. 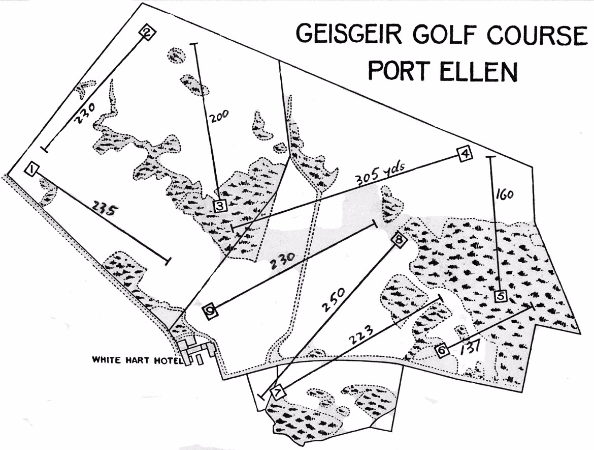 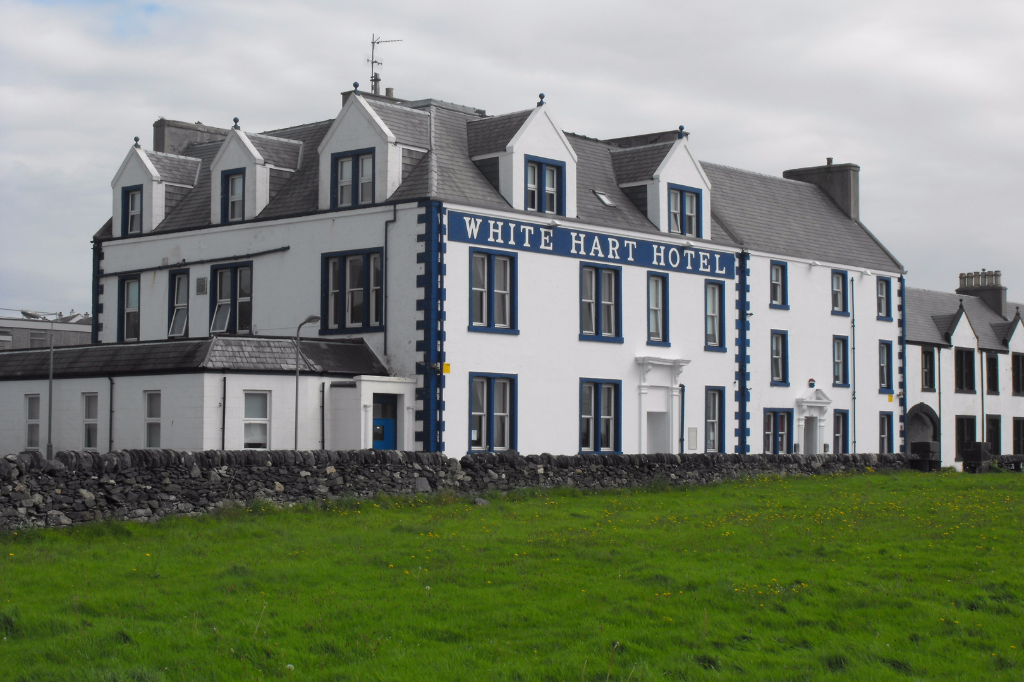 "The formal opening of this course for golf took place on the afternoon of the 15th inst. in brilliant sunshine, in the presence of a large company of players and the general public.

Miss Ramsay, Cairnmore, who performed the opening ceremony, was met at the principal entrance, adjoining Memorial Hall, by the Misses McCuaig and nieces, Misses F.Mackechnie, and L. McCuaig, accompanied by Mr P.Reid, Tighcargamin, and conducted to the first tee, facing the west windows of the White Hart Hotel. Here a large group formed, while the camera was adjusted to obtain a photographic memento of the event.  This done. Miss Ramsay, taking the silver-mounted cleek presented by Miss McCuaig for the purpose, addressed the ball which as it sped through the air amid great cheering, was, the signal the Gesgeir Links were open to the public.

Many of the public being present, groups of onlookers followed the players, as much to notice the landscape and configuration of the ground as to watch the play. The former purpose yielded constant delight, for the scene was bathed in warm sunshine, and the progress from green to green yielded fresh and varied pictures of even and terraced lands, gentle slopes, abrupt falls and natural hazards, which appealed alike to artistic and sporting instincts.

The following, the  direction of Traigh-Gesgeir, the line of play from the first tee is westward over even ground, enclosed by a stone wall from the public road.  Save a few rabbit scrapes, the risk of a pull to the highway, the chief  barrier to Craig an Fhion hole is an outcrop of rock facing the green.

At Tighcargamin play turns northward, and for two-thirds of the way the ground gently ascends to the foot of an abrupt precipice, flanked by a grassy declivity, which is the pathway to the putting green.  This obstacle may either be avoided by deviation or cleared, and for the latter a professional drive is requisite, or a lofting iron from a convenient distance may carry the level above.

The third stage, looking south-east, with a considerable dip midway, is made interesting by the position of the green.  A bluff rock, rising from a level, guards it on the line of  approach, and another less formidable on the right.  The entrance between is indicated by a post.  Taken by front or at an angle, an accurate pitch alone finds the  putting green, and too much force sends the ball to broken ground, or throws it trundling down a steep decline.

On the fourth tee, placed on the crown of a knoll overlooking a stone wall, which has to be scaled, the player has reached the part of his journey which seeks to turn inland towards the north-east, over ground ascending by easy gradients. The height brings to view the flag a few yards away, and beyond, in the distance, a pastoral scene which attracts the eye.  Having holed out, the golfer turns south, crossing the most elevated part of the course the site of many a bonfire on occasions of great local rejoicing. On the crest a panorama of wide extent faces the player, the village nestling below, with headlands, islands, and an expanse of sea forming the distant view.

On the way to Berradh Dhubhaig, or fifth hole, the dangers in the way are a stone quarry to the left, and a rocky gorge on the further side of the green.  The objective is now south-west.  From the tee, Coille nan Capull presents a peculiar formation.  A  sudden dip, a trap dike crossing the line of play, an escarpment of denuded and grass covered rocks receding to right, and an open plane in front, are the main features. The same direction is followed in driving to Cnocna Faire a conical hill above the village. The ball in play essays a ruinous stone wall, which crossed leaves open way to the seventh green, though in the approach a little excess strength may carry to difficult hollows beyond.

A circular mound makes the starting point for Gesgeir, looking to the south-east.  The principal hazard is the stone wall referred to , which again comes in line of play and if not negotiated may swell the score. Even ground marks the rest of this hole.

The final stage is southward to the home as the name of the last hole expresses. The ground slopes evenly to the green, adjacent to the hotel stables. Here no difficulty faces the player, though the ruts of a cart road and a crossdrain form traps for the unwary.

The course is interesting from a scenic point of view, and though not extra difficult offers sporting advantages of an order not met with on more ambitions fields. To the beginner, and to many who are not novices, Gesgeir will be a practice ground where skill, strength, and judgement will have fair trial.  In laying down the course, the local experts were consulted with advantage.  The measurement of distances the painting of numbers and names on flags and boxes and other preparatory work, were entrusted to Messrs A.&R. MacArthur, Port Ellen.

The names given to the different holes, with the distances, are as follows:-

The course is now part of Port Ellen Playing Fields. 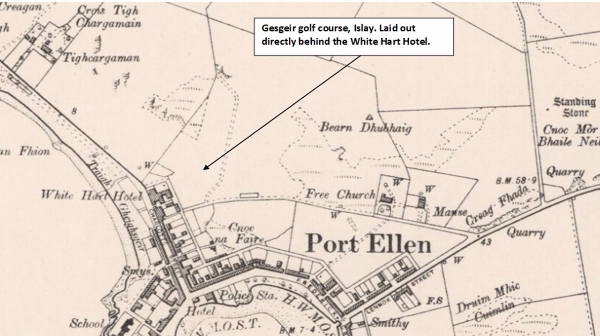 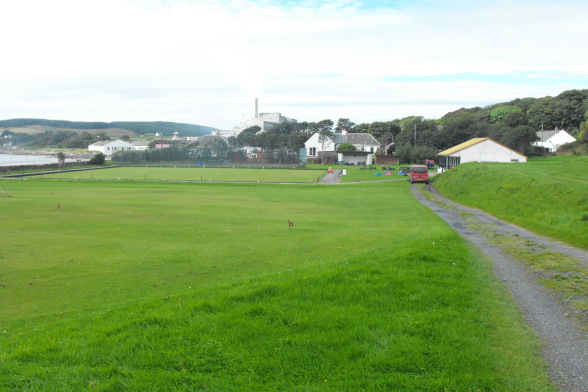 A putting green and a bowling green on what used to be the 1st fairway and green. ( See Layout Sketch ) 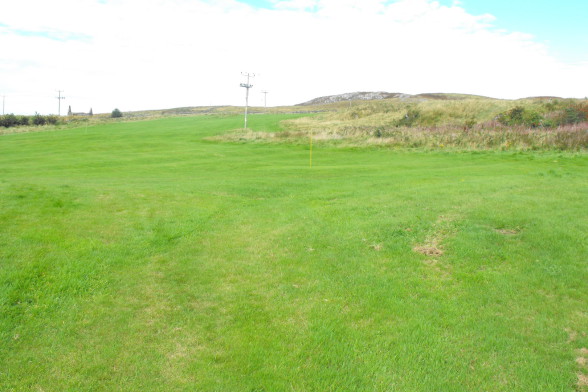