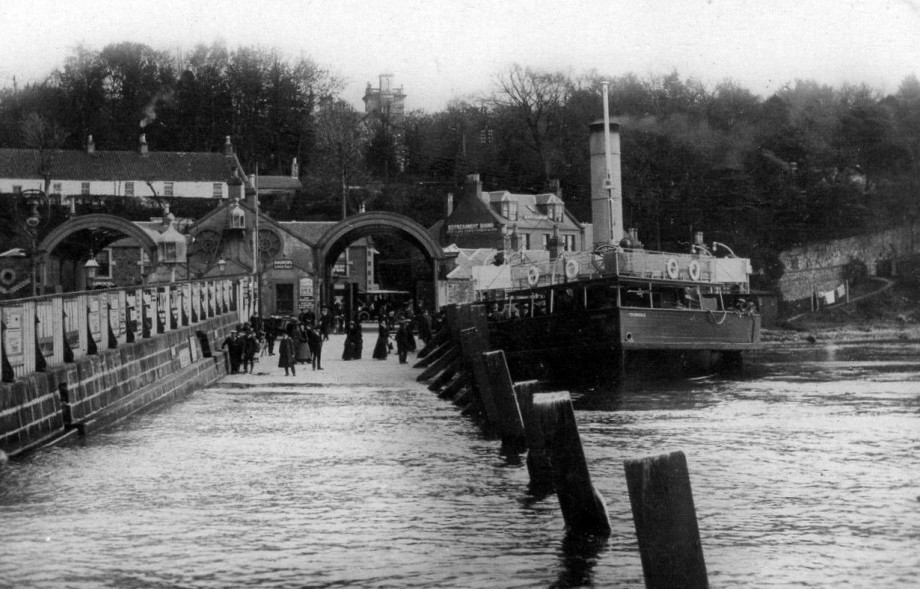 Newport Golf Club. Instituted 1886.  A 6-hole course on Tayfield Estate at Inverdovat.  The area subsequently became known as ‘Horse Park’, immediately to the west of the policies of Chesterhill  House and to the north of the public road.  Membership 45(1889) .

Closed in 1890 when incorporated with Scotscraig.

"The movement which was lately set on foot for establishing a golf course near Newport culminated on Saturday in the opening of the green. A fairly suitable piece of ground between Inverdovit Farm House and the Cliff and bounded by Causwayhead Hill and Tayport Road, has been secured.

The course is covered with short grass, and contains one or two “ Stiff” which will tax the tyro’s patience and the experienced golfers skill. With a little clearance, Causwayhead Hill might be added to the course, which would then, in difficulty at least, be second only to St Andrews.

From the ground a wide view is obtained, stretching from Buddonnes to Fifeness, and comprising a long vista of field and wood, which is eventually lost in a blue line of hills. The course, thus, finely situated, has been laid out in six holes, and can be gone over in about three quarters of an hour.

Mr H. Walker, as Captain of the club, then drove off the first ball. Several foursomes were engaged in, and a pleasant afternoon spent. 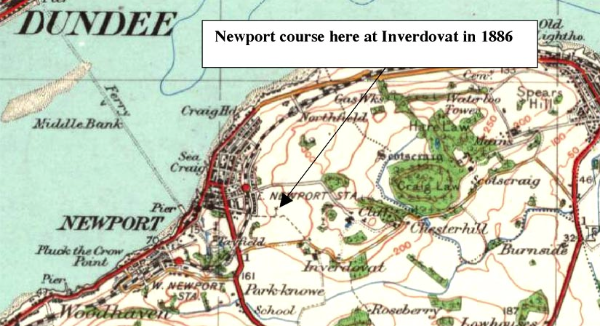 Home Green Inverdovat.The ground at Inverdovat, about one mile from Newport (Fife), is nicely situated, and commands a beautiful view of the surrounding country and the estuary of the Tay. The course is of limited extent, and consists of six holes only. The best play is obtained in the winter and spring months, as the long grass is troublesome in summer.

The putting greens are indifferent, and the majority of the players inexperienced. A small house has recently been erected for the convenience of players." (GA 1889-90)

"A match took place at Tayport on Saturday between four members representing the Scotscraig and Newport clubs on the Scotscraig course, the conditions being two rounds of the course, inall 20 holes. The Scotscarig were the victors by 17 holes. Scores :-

"The spring meeting match of the Newport golf club for the scratch and the handicap medals was played on Saturday afternoon over the course at Inverdovit. The wind was too high and the course rather rough for good play, but the scoring on the whole was very creditable for the club. The fact that medals were to be played for on this occasion excited great interest among the members, eleven of whom started for the match, among them being Chief Magistrate Scott, who takes a keen interest in local athletics, as well as matters purely municipal. The Honorary Captain, Mr Harry Walker, and several ladies were also present. After a keen match, it was found that Mr James Gold had won the scratch medal recently presented to the club by its Hon. Captain, with the highly creditable score of 101, and that Mr Michael S. Carr, has gained the handicap medal of the club with a score of 118 less 18 odds, making his reduced score 100." (DC 23.4.1888)

Although Scotscraig is only a couple of miles from Newport, there was a movement in the town to have a course of its own. Although nothing came of the initial activity, further attempts were made over the next 10 years

“St Fort Hill, Newport, which is within easy access of the West Station, Newport, has been inspected with the object of determining its suitability for the purpose of a golf course. Bob Simpson, the Carnoustie professional, has given it as his opinion that the hill would make a full course of eighteen holes, abounding in natural hazards, which would make play interesting. A farmer at present owns the hill, which measures about 100 acres, for grazing purposes, but his lease expires in the course of a few months.”. (S 21.4 1898)

The feeling, which has recently been manifested in Newport and Wormit regarding a golf course for the burgh, took a practical step last night when a large and influential gathering attended a public meeting in the Blyth Hall, Newport, including a good number of ladies. (ET 11.1.1908)

“The proposal to acquire part of St Fort Hill as a golf course for Newport is unlikely to succeed. Recently a petition was presented to Lady Corbet, the proprietrix of St Fort. Provost Leitch, Newport, has recently received a communication stating that Lady Corbet has given the wishes of the petitioners consideration, ui is convinced that if she agreed to the request it would be most detrimental to the interests of the estate, and especially to the amenities of St Fort House. In fact it would be extremely difficult to find a good tenant for St Fort. Under these circumstances Lady Corbet regrets she unable to accede to the wishes of the petitioners.” (C 11. 2.1912)

However the townspeople did not abandon their hopes and continued to look for alternatives.

“The burgh of Newport is to get a golf course. This was decided at a public meeting, last night in Wormit Hall, which was largely attended. Provost Leitch presided, and said they were met to give the proposed golf course their support, as it would be a great benefit indeed.

There was no reason why they should not get financial support in order to enable them to go on with the necessary work.  Mr W Cowley, who has been the pioneer of the scheme, thought he was right in saying that it was a dozen years or more since the proprietors were approached regarding ground in this neighbourhood, but some how or other negotiations fell through.  Mr Cowley then proceeded to point out the ground selected for the golf course, which consists of 26 acres in the bay and 14 in the den, equal to 41 acres in all, this being quite ample for a 9 hole course.  There is a river frontage of 500 yards, and the den extends south towards the Gauldry Road for 900 yards.  In addition to this, provision has been made for taking another two fields, containing about 34 acres which will enable them to complete an 18 hole course.  This additional ground is on the east or other side of the railway, to which access is got from the den by crossing under a level crossing.  This ground begins at Wormit Farm, and stretches right across to the Gauldry Road and has a width of about 313 yards at its widest part.  He had secured a lease for 14 years at 30s an acre, which amounts to £75, but he estimated that it would be reduced to £45 by letting it for grazing.  The provisional ground at the end of seven years would be 35s an acre. At present 166 had intimated their intention of joining the club. 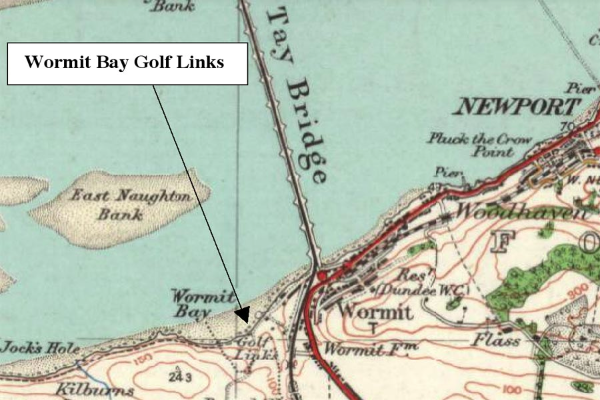 Mr A Auchterlonie, who had examined the ground, in the course of his report stated that the ground was most suitable for a golf course.  It certainly was rough but if a thicker crop of grass could be grown, and all the loose metal removed, quite a nice course could be made.  It would take £200 to complete the work, but he thought the sum would do quite a lot towards its construction.

Mr Cowley said they would get possession in October, and they could start at once on the temporary green.  Mr G D Macdougald said the whole community of Wormit and Newport were indebted to Mr Cowley for the great amount of work he had done in this matter.  He then proposed that they form themselves into a club for Wormit and Newport. This was agreed to.

Mr George Scrymgeour said it was only fair to say that, as far as Newport was concerned, there was no want of enthusiasm on their part or want of ground in Newport.  The trouble they had experienced was with the landlord.” (C 17.7.1912)

Wormit Bay Golf Club. "The course was established in 1912 and by careful culture now ranks as one of the foremost nine-hole courses.  Apart from its sporting nature, the ideal situation lying towards the River Tau at the gateway to Balmerino Braes should appeal to those who appreciate an enjoyable game in pleasant surroundings.  Reduced railway tickets between Dundee and Wormit are granted to members.  Refreshments may be obtained at the clubhouse which is open to visitors.  1/- per round f 18 holes.  Weekly Tickets, 3/6; Monthly Tickets, 10/6.  Entry Fee — Gentlemen £2 2/-; Subscription £1 6/-.  Ladies  — Entry, .£1 1/-; Subscription,  15/6."  (GIF) 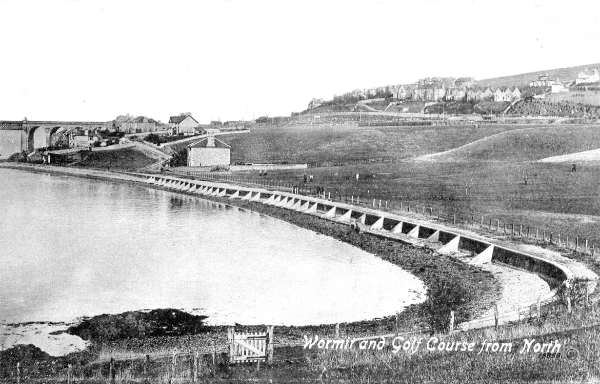 Given the Burgh’s success in establishing a golf club, it is surprising to read that, at the height of club’s success, the rumblings should  arise again.

“Councillor Peattie of Newport Town Council last night raised the question of the provision of a golf course for the burgh, which, he thought, might be made under the Physical Recreation Act. He considered the ground belonging to the `St Fort estate and situated to the south of West Newport Station might be suitable. Mr F H Morrison, town clerk, was instructed to write to the agents of St Fort estate and find out if that ground would be available for such a purpose. Recreation Convenor Hayens explained that he wished, if possible, to get advantage of any grants which might be obtained under the Act, and he thought a meeting of the leaders of the various athletic, recreational and youth organisations in the burgh might be called to discuss the matter. It was decided to call such a meeting.” (CA 8.12.1937)

There is no record of the outcome of this meeting and it must be assumed that the townspeople were content with their lot.