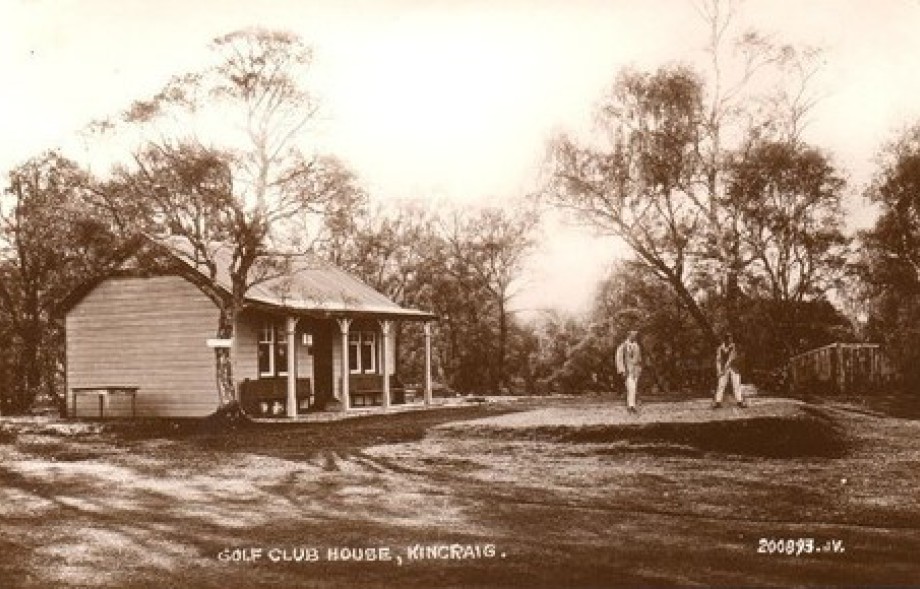 Kincraig Golf Club.  Instituted  1898  A 9-hole course adjacent to the station. Because of the similarity of names with the Inch and Kincraig club, this club was known as Alvie  for several years, Kincraig being in the Parish of Alvie. The club had two courses and while the location of the second course is established, no clear description has emerged for the original course.

Opening of a New Golf Course.

"Kincraig station and it’s vicinity has in recent years become one of the most popular summer quarters in the district, and it’s attractions are now enhanced by the possession of a golf course, which was formally opened on Tuesday afternoon.

The ground is close to Loch- Insh and the Spey, within two or three minutes walk of Kincraig Station, and the situation is most attractive. The course is one of nine holes, but is not of great length, although sufficiently diversified in the matter of ground. Mr Macpherson of Balavil has been appointed President of the club, and Mr Peter Wilkie Jun. Post Office, Kincraig, Secretary.

In a short speech, Mr Anderson explained the reasons which had induced the resident inhabitants to provide a course, and hoped it would be a centre of attraction alike to themselves and visitors.

He then called upon Mr Macbain, Kincraig House, who presented Mrs Macpherson of Balavil with a silver mounted Golf Club and ball.  Mrs Macpherson then “ Teed” the ball, and, having struck out capitally, she in graceful sentence declared the course open, expressing the hope that it would be very successful. Mr Wilkie Jnr, Secretary, proposed cheers for Mrs Macpherson, and on behalf of the members begged to thank her for having honoured them by consenting to perform the opening ceremony.

The Laird of Balavil, who was most cordially received, on behalf of Mrs Macpherson returned thanks for the honour they had done her on that occasion, and himself by appointing him President. They would continue to take much interest in Kincraig Golf Course, and sincerely hoped it would be very successful. He trusted it would be well patronised by the local people, as they would soon begin to realise the attractions of the game. Some twenty couples started on the round, which was highly enjoyed. Tea was served on the course.

The course is on grazing ground belonging to Mr F. Macbain, Kincraig House. Mr Macbain is a keen lover of all sports and pastimes, and deserves to be recorded that he generously gives the use the ground free of any charge." (IC 15.7.1898)

"A nine-hole course was opened at Kincraig on Saturday afternoon, in presence of a large gathering of residents and visitors. In the unavoidable absence of the Mackintosh of Mackintosh, the superior of the land, the opening ceremony was performed by Mr Brewster Macpherson of Balavil.

Rev. Mr Munroe, Insh, in calling upon Mr Macpherson to open the course, made mention of the fact that this was the second course which had been provided in the district. Owing to the unsatisfactory nature of the former one, they had procured ground for the present course, which Chief Constable McHardy, Inverness, who laid it out, considered one of the best in the district. Mr Macpherson of Balavil declared the course open and drove off the first ball, after which a game was played between the members." (NC 11.7.1906) 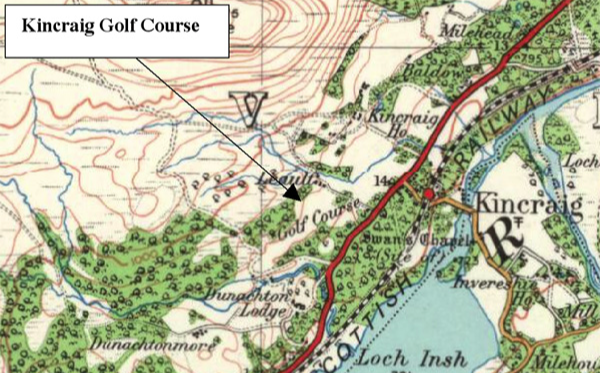 "The golf course instituted last year at Kincraig was formally opened for the season by Mr Macpherson of Balavil, on Saturday.

Notwithstanding the unpropitious weather, a crowd of local enthusiasts and visitors turned out, augmented by a contigent of lady and gentlemen golfers from Kingussie.

For some time back the course, which is conveniently situated amidst beautiful surroundings, has been undergoing a thorough overhauling under the direction of Mr Peter Stuart, and a marked improvement was noticeable on the course. The greens have been enlarged, and have developed a fine putting surface." (NC 10.7.1907)

Bazaar and Dance to Raise Funds

"In aid of the funds of Kincraig Golf Club and to defray the costs of a new club-house in course of construction, a bazaar was held in the Parish Church Hall, Kincraig, in lower Badenoch, on Friday. There was a large attendance, including many visitors to the district. At the opening ceremony, which was performed by Mrs Mackintosh of Mackintosh, who was accompanied by the Mackintosh, Lord Lieutenant of Inverness-shire.

Mrs Mackintosh of Mackintosh, who was introduced by Mr Macpherson of Balavil, said a suitable and up-to-date club-house was greatly required, and it would be a great acquisition to their beautiful golf course, and to all those who played the great game." (AJ 25.8.1924)