Fortingall. First mention 1894. A 9-hole course. “It is proposed, on the Roman Camp at Fortingall, to form a golf course. The camp is a square of beautiful turf and broom about half a mile each way, and bounded by the Lyon River and the public road on three sides. It is about a quarter of a mile from Fortingall Village, on the road to Fearnan. The camp has capabilities which may yet make it one of the best, as it certainly would be one of the most picturesque golf courses in Scotland. There are some excellent sand bunkers and any number more could be made as the subsoil is sandy. The place is only two miles from Fearnan Pier, on Loch Tay, to which there is a service two or thee times a day from Killin by steamer.”   (Glasgow Herald 27.6.1894) 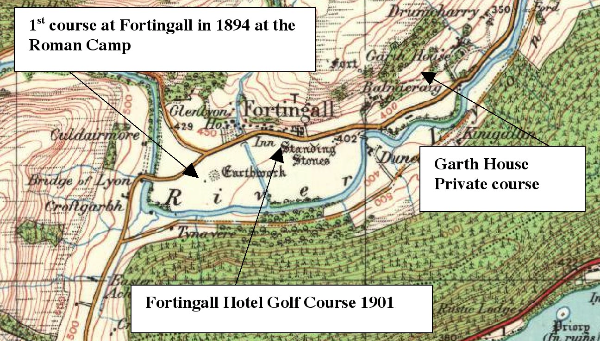