Insh & Kincraig Golf Club.  Founded 1897.  The course, of nine holes, at Lynachlaggan is about two and a half miles from Kincraig station and two miles further from Kingussie. 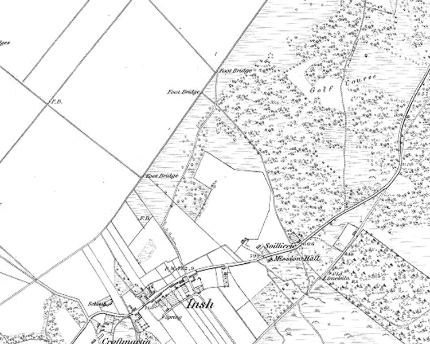 "Under the auspices of this recently formed club a new course was yesterday opened on the farm of Lynchlaggan, Insh, on the Invereshie estate of Sir George Macpherson Grant, the ceremony of driving the first ball being performed by Miss Dolly Burns, the youthful daughter of the Rev. Thomas Burns, of Lady Glenorchy Church, Edinburgh, who, as a keen golfer and an annual visitor to the village of Insh, has taken much interest in the formation of the club and the laying out of the grounds.

The course is one of nine holes, runs over a mile and a half of ground, and commands a splendid view of the valley of the Spey, Loch Insh, and the Monaliarth Hills, and is considered by experts to be an admirable one, being at the lower part intersected by several large gulleys, which fully test the capabilities of the players. The starting tee is close to the highway from Kincraig and Kingussie Stations, being distant about three miles from the former and six miles from the latter ; and it is perhaps a consideration to strangers that a hotel is in the immediate vicinity.

After a service of cake and fruit a short speech was made by the Rev. Mr Munroe, M.A., Parish minister of Insh, Miss Dolly Burns struck off the first ball amid cheers, and thereafter nine couples started to go round the course, including Rev. Messrs Munroe and Burns, Fletcher and Struthers, the joint secretaries, and several members of the Kingussie club, who drove down to give a setting off to the new course. The lowest score ( 52 ) was made by Mr Ross, Kingussie. Of the new club, Sir George Macpherson Grant is President, and Mr Baillie, M.P., Vice President, both of whom have contributed handsomely to the funds, as have several other gentlemen, natives and visitors."

“The course, of nine holes, at Lynachlaggan is about two and a half miles from Kincraig station and two miles further from Kingussie. A gold medal is awarded to the compiler of five best scores during the season. The holder is J Kennedy.”