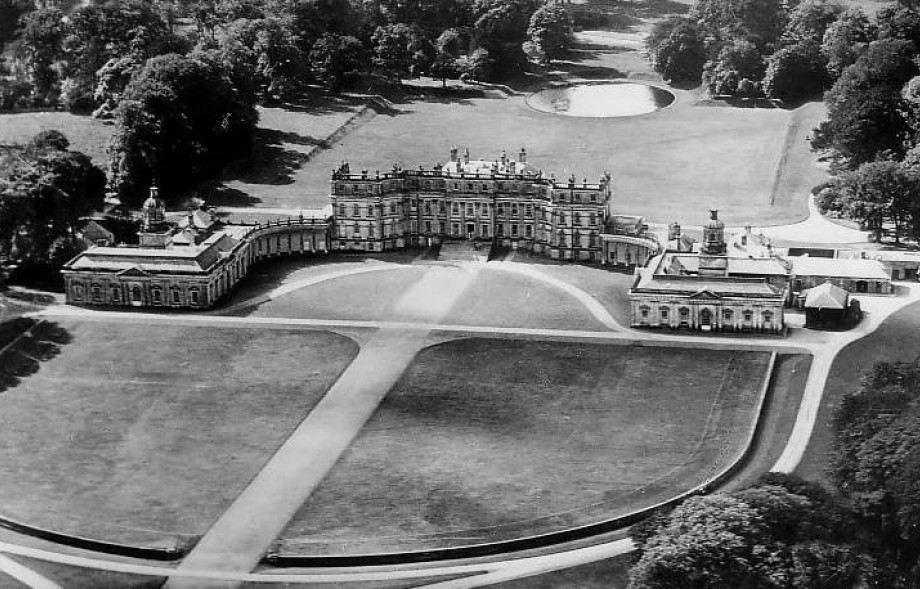 The Mid-Lothian private courses found so far are:

The following text is taken from an article on the opening of Torphin Hill golf course in 1902.

Torphin Hill, as most people know, is one of the nearer and smaller hills belonging to the Pentland range situated to the South East of, and just above, the village of Juniper Green, which it dominates. It forms part of the Woodhill estate, belonging to Sir William Lister Foulis, Bart. From it one of the finest and most extensive views in the country is to be had.

Torduff reservoir and the private road belonging to the Edinburgh and District Water Trustees picturesquely divide it on its Eastern side from Bonaly Hill, on which there is also a private golf course, provided for the use of their office staff by Messrs Lindsay Jamieson, and Haldane, C.A. 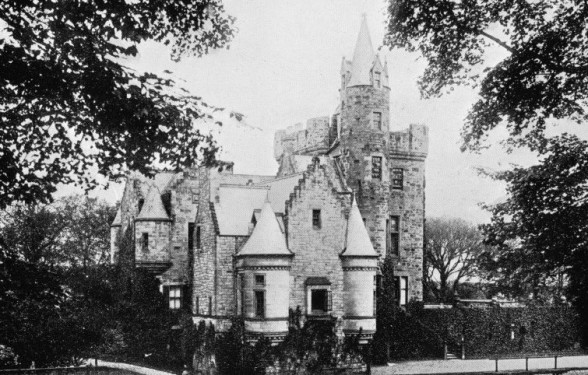 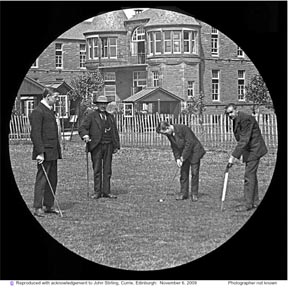 The City Hospital was on Greenbank Drive, Edinburgh. The course mentioned was a substantial putting green, seen left, probably established principally to afford exercise for the patients, since there was little space for any other activities. The Golf Club was set up for the benefit of female staff,

Nr South Queensferry..  In September 1905 Willie Park laid out a 9-hole course for Lord Roseberry, for use by Lord Roseberry, his guests and estate workers.  The course was still open in 1954 when “40 estate people play there regularly, and His Lordship can hold his 11 handicap more than comfortably.”    ( GI 21.8.1954) 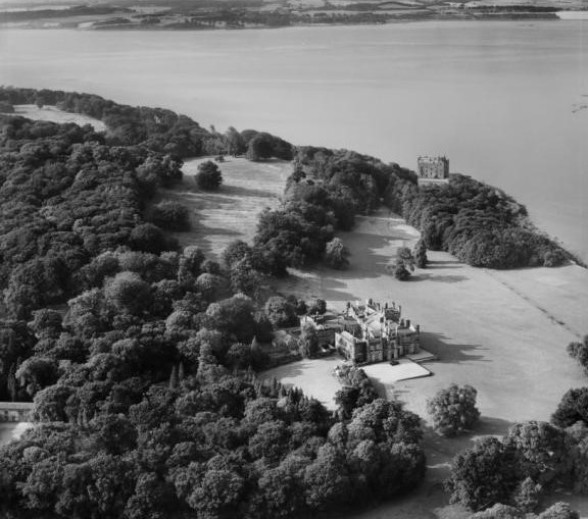 A Golf Course For Lord Rosebery

When Lord Rosebery opened the new club house of the Edinburgh Burgess Golfing Society at Barnton in 1897,he said he would preserve the set of clubs with which he was presented as a memorial of the meeting . He would have liked to have been able to take his part in the amusements of the club, but he thought what would require very mature consideration.  Those who, thanks to his Lordship’s kindness, occasionally enjoy the delightful walk from Cramond to Queensferry through the grounds of Dalmeny Park, have recently been afforded evidence that Lord Rosebery, if he has not taken to golf himself, has taken care to see that those of his guests who are golfers should not be denied the privilege of a round,.  \Here and there among the trees or the magnificent park in where Dalmeny House is situated, but particularly in that part of it between the house and Barnbougle Castle, nine newly painted “flags” denote that the golfing microbe has found a lodgement in the vicinity.  For the most part the holes are of the two stroke order but one would imagine that ample compensation for any lack of length is found in the pleasure which must be derived from playing over the stretches of excellent turf on which the course is laid out.  Lord Rosebery is by no means the first nobleman to convert a portion of his policies into a golf course.  As a matter of fact His Majesty the King, who at Marienbad the other day showed his interest in the game by following a foursome from start to finish of the round of eighteen holes, had a course laid out some years ago at Windsor Castle, and at Chatsworth the Duke of Devonshire has an excellent course.  The idea of forming a golf course at Dalmeny Park may have been far from Lord Rosebery’s thoughts when he said that it would require very mature consideration before he would take up the game. But a lot of golfing history can be made in eight years, and the members of the ~Edinburgh Burgess Golfing Society, and golfers in general, will rejoice if they learn that the clubs which his Lordship intended to preserve as a memorial have been put to active service.

Golf Club-  At a meeting held in the Rosebery Hall last Thursday over 60 enthusiasts welcomed the formation of a Golf club in the burgh and district.  The meeting was addressed by Dr. G. Hughes who outlined the importance and need for such a club.  After Dr. \Hughes had given an excellent summary of the proposed undertaking the platform party which with Dr. Hughes included Mr J. Muir, Mr P. Somerville and Provost J. Lawson, vacated their positions and the meeting was declared open for the election of the Club’s first officers.  The members elected were as follows-  Club Captain. Dr G. Hughes. Vice-Capt. Baillie R.R. Law secretary and Treasurer, Mr J. Muir Hersey Bank. South Queensferry.  Committee members are- Mrs P. Somerville 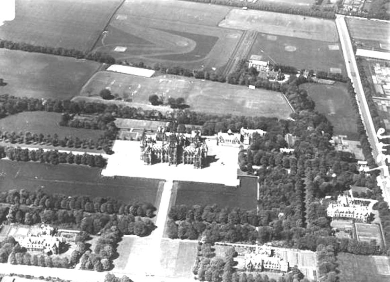 Fettes College. A 9-hole course, laid out in the grounds for the benefit of staff and pupils. The course did not survive WW2.

"The Marquis of Linlithgow, who as well as his two sons, the Earl of Hopetoun, and Lord Charles Hope, takes a keen interest in the game of golf and has had a nice little course of 14 or 15 holes laid out at Hopetoun. Lord Charles Hope, has, for the second year in succession, won the medal in the North Berwick competition for boys under 15, and quite recently he tied with another player for the first place in the handicap competition over the Norwich course. Lord Hopetoun and Lord Charles, his brother, “ were coached” by Harry Vardon over the Norwich course."   (EEN 7.9.1906) 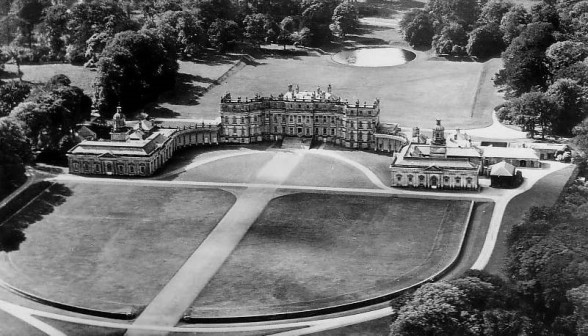 Well, if they can't afford a wee nine hole golf course, then who can !! ?.

Mavisbank Asylum, Loanhead. A 9-hole course laid out in the grounds in 1894 by Doctor George Robert Wilson, the Medical Superintendent, who was a scratch golfer and as such is listed victorious, year after year in the British Medical Association Tournaments. He was also a Scottish Rugby International. He died in 1906, age 42, and it is unlikely the course survived much beyond this. 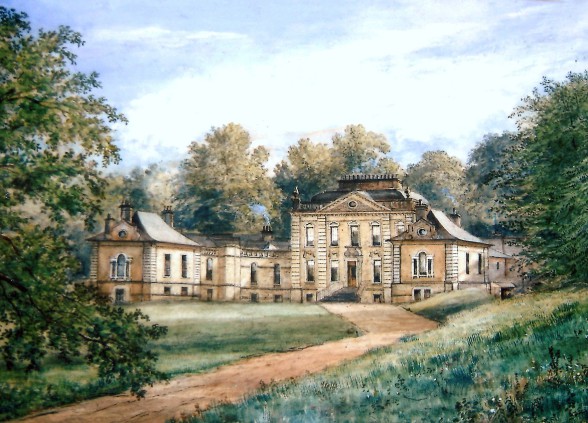 Mavisbank in its glory days, but its a spooky old place now.

Penicuik House. A nine-hole, course to the front of the house, for the use of family and guests. Source: Lady Clerk, descendant of the owner. 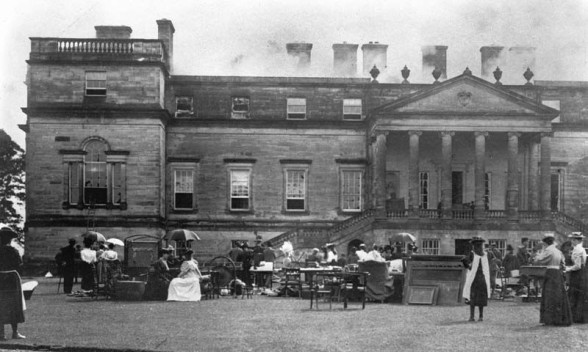 The great fire at Penicuik House which gutted the building.

Castlelaw Golf Course, near Penicuik. The only reference to a possible course at Castlelaw is from this photograph. The caption reads: 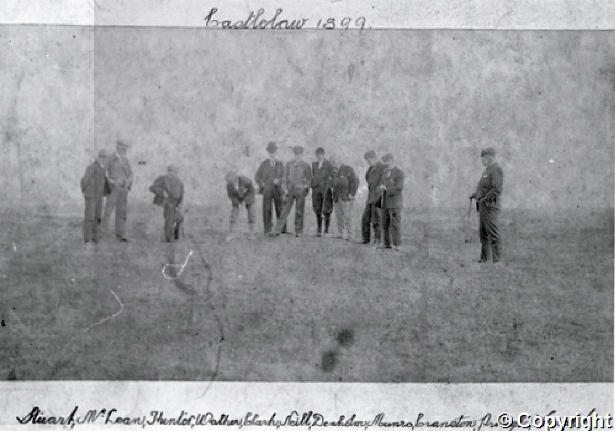 This photo shows eleven gentleman playing golf at Castlelaw. The names of the men from left to right are written under the photo in a caption. They are: Stuart, McLean, Hunter, Walker, Clark, Neill, Nenholm, Munro, Cranston, Ptingle, Smart.