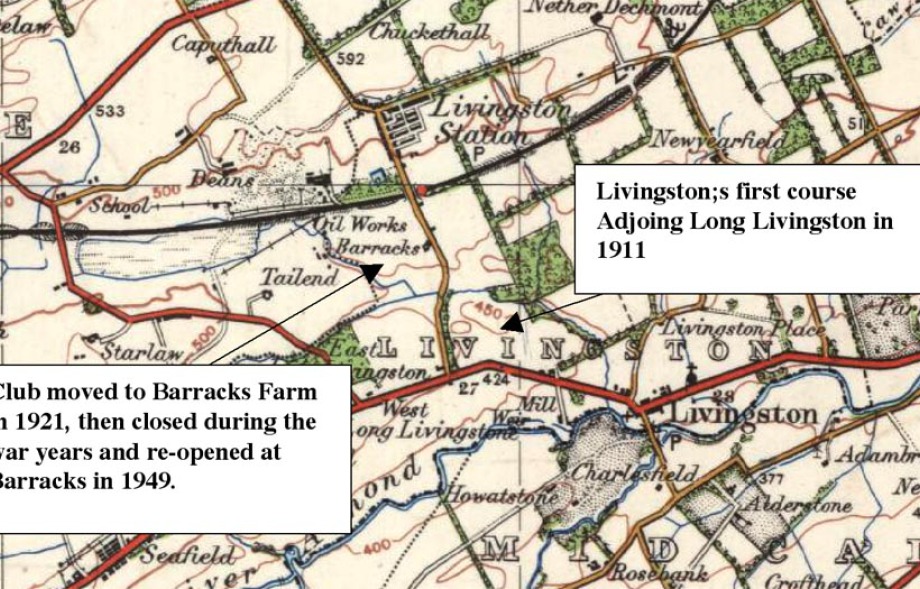 "A largely attended meeting of those interested in the formation of  a golf club was held in the Seafield school on Tuesday evening. On the motion of Mr Carse, Livingston Station, Mr Renwick Cowan was appointed chairman of the meeting.

The chairman briefly stated the object of the meeting and opened a discussion on the advisability of having a golf club formed, and after an estimate of the initial outlay had been drawn up , it was agreed unanimously to form a club, providing a suitable course is available.

As nothing definite could be arranged until a course was fixed on, a deputation consisting of Messrs Renwick Cowan, John Provan and Henry Davie, was appointed to approach a local farmer with a view to arranging terms for the use of suitable ground, as central as possible, and to report to a further meeting to be held on Tuesday evening in the Seafield school.

A large measure of support has been promised by numerous gentlemen in the villages of Livingston, Livingston Station, Star law, Seafield and Blackburn who have signified their willingness to become members of the club, and if a central course be procured the formation of a successful club is assured.

The promoters desire a full attendance at the meeting on Tuesday night when, office Bearers will be elected and other business transacted, providing the deputation arrange favourably anent the course."  (WLC 17. 2 1911)

“A meeting of those interested in the formation of a golf club for the parish of Livingston was held on Tuesday evening in the Seafield school. Mr Renwick Cowan presided over a good attendance, supporters of the proposal being present from Blackburn, Livingston, Seafield and Livingston Station.

The chairman reported the result of the interview between Mr Buchanan, Livingston Mill, and the deputation appointed at last meeting, and an offer by that gentleman was accepted on the motion of Mr G.Fleming, seconded by Mr J.Carse. The proposed course extends to 20 acres or thereby, and is adjoining Long Livingston, and expert opinion is that it is admirably adapted for such a purpose, and in a year or so an ideal course should be the result.

Subscriptions were fixed as follows Gentlemen, 5s per year ; Ladies, 2s 6d per year ; and youths under 18 years of age 3s per year.

This was all the business and the meeting closed with a vote of thanks to the chairman. The committee later met and appointed four of their number to have the agreement fixed with Mr Buchanan, and to have the course laid out as early as possible.”

"Rapid progress has been made in the laying out of the new golf course at Livingston Toll and it is expected to be opened at an early date. The course is one of nine holes and as the hazards are few it should be greatly taken advantage of by beginners. It is understood that already about fifty members have joined the newly formed club"

"The new course near Livingston Toll will be formally opened on Saturday afternoon, when a match will be played between teams captained by the President and Vice President"   (WLC 21.4.1911).

“Despite the unfavourable weather a large attendance of members and others interested in the game witnessed the formal opening of the new golf course at Livingston Toll on Saturday afternoon,by the Rev. G.A.Smillie, president of the club.

Mr Smillie drove off the first ball and getting a good distance his effort was heartily applauded. A foursome was played between Mr Smillie and Mr Carse against Mr Cowan and Mr Provan, which ended all square. A large number of other players took part in friendly encounters and the enthusiasm shown augurs well for the future success of the club.

The course was in excellent condition, although the greens are as yet a bit rough, but with judicious treatment they will soon be in first class order. As already stated in our columns the course is of nine holes and extends to 20 acres adjoining Long Livingston, Livingston Toll, half a mile from Livingston Station.  or thereby. Full advantage has been taken of the area at the club’s disposal and valuable assistance was given in the laying out of the course by Mr J.Walker Bathgate, and others.

The members are drawn from the villages of Livingston, Blackburn, Seafield, Starlaw, and Livingston Station, and in addition to the large number who have already joined many others have signified their intention of identifying themselves with the club. The committee are indebted to those who subscribed so handsomely, as after the initial outlay has been cleared, the club will be in a sound financial position.

"On Friday evening the Livingston Golf Club “At Home”,  an event which has been looked forward to for some weeks with no ordinary degree of interest, took place in the works institute, Livingston Station, and was attended with vast success. The attendance numbered 110."   (WLC 26.1.1912)

“The annual meeting of the Livingston Golf Club took place in the hall on Wednesday night past. The minutes and balance sheet for the year were read by the secretary, Mr Pedan, and being satisfactory were unanimously adopted. The Rev. G.A Smillie, who presided, announced that the course would be formally opened on Saturday 18th inst. When the competitions would be commenced.”   (LG 10.4.1914)

The club closed owing to the strictures of WW1

“A meeting was held on Tuesday evening when it was agreed to restart the golf club, providing that the Livingston Toll Course could be again secured.  A small committee was appointed to make the necessary arrangements.”    (WLC 9.5.1919)

“A meeting of members of Livingston Golf Club was held in the Institute Hall on Wednesday evening of last week  Mr B.Findlay presided over a large attendance.

A plan of the extended course was submitted and unanimously approved.

It was agreed that the membership fees for next season be as follows:-  Gent’s, 15s, ladies, 5s; youths, 5s.

It was decided to hold a whist drive and dance at Seafield, and the secretary was instructed to apply for the use of the Institute.  Vote of thanks to Mr Shaw for preparing the plan of the new course and to the chairman were heartily accorded.”

Golf Club:-  The committee of Livingston Golf Club have arranged to formally open the extended course on Thursday 21st, when a mixed foursome competition will be played.  The club has recently acquired a new Talisman mower for greens and a horse mower for the fairways and Mr Calder, greenkeeper, is unsparing in his efforts to have the course in first-class order.  A large number of new members have joined the club and a successful season is anticipated.

“The new golf course on Barracks Farm was formally opened for the season on Saturday afternoon, when a mixed foursome competition was played.

Mrs Pringle, Alderstone, drove off the first ball, and declared the course open. Mr Andrew Harkins, president of the club, also made a few appropriate remarks.  Mr Isaac Towe, on behalf of the members, made Mrs Pringle the recipient of a handsome silver card case, in appreciation of the practical and generous interest shown to the club by Captain and Mrs Pringle since they came to the district.  Mrs Pringle suitably acknowledged the gift.

The weather conditions were splendid and a large number of members took part in the competition, which gave the course a bright and animated appearance.

The course was in first-class order and some good cards were returned.  The first prize was won by Miss Quigley and Mr D. Jamieson; the second prize-winners being Mrs Watson and Mr James Provan.

After the game the players adjourned to the Institute Hall, Livingston Station, where tea was served, and a pleasant hour spent with songs, etc; followed by a dance.

Much enthusiasm is being shown in the golf club, and a very successful season is expected, for which great credit is due to Mr James Shaw, the energetic secretary of the club.”    (WLC 20.4.1921)

"A very successful and enjoyable whist drive and dance under the auspices of Livingston Golf Club was held in the Institute Hall, Livingston Street on Friday evening. Over 50 couples attended the gathering. The hall was tastefully decorated for the occasion and presented a bright and artistic appearance. Whist was engaged in and some keen play was witnessed."   (WLC 7.3.1924)

"The Livingston Golf Course was formally opened for the season on Saturday. The weather though cold, kept fair, and a good turnout of members took part in the opening game. The Rev. Dr Copeland, in a few appropriate remarks, declared the course open for play and wished the club a successful season. A mixed foursome competition was played, First prize was won by Mrs Shaw and Mr James Provan.

The members and friends afterwards met in the Institute Hall, Livingston Station, where tea was served. A pleasant hour was then spent with songs etc. A dance followed, which was well patronised. The music was supplied by Mr Shaw’s Band."

“At the AGM of the Livingston Station golfers, the financial affairs of the club were debated and after a lengthy discussion it was decided to close the course for the duration of the war, owing to exceptional circumstances.”

“During the late summer it was decided by those interested to try to re-form the golf club. Meetings were arranged and it was found possible to proceed with the project, and now a suitable field has been rented from Mr P. Wardrope, the Barracks Farm, Livingston, situated at the east end of the village.

When the club had to wind up it’s activities during the war years, the funds were placed in trust with the committee of the Deans Institute, and to add to these, a whist drive, domino competition and dance were held on Friday last. There was a good response and there were over 40 tables engaged. Hostesses provided tea for a table, and the club hope to realise a goodly sum from the venture. Dance music was provided by Miss R. Quigley, Piano, and Mr M. Sneddon, Accordion.”    (LG 2.12.1949)

There is no evidence in any of the archived West Lothian newspapers, or Golfer's Handbook, that the club formally re-opened..