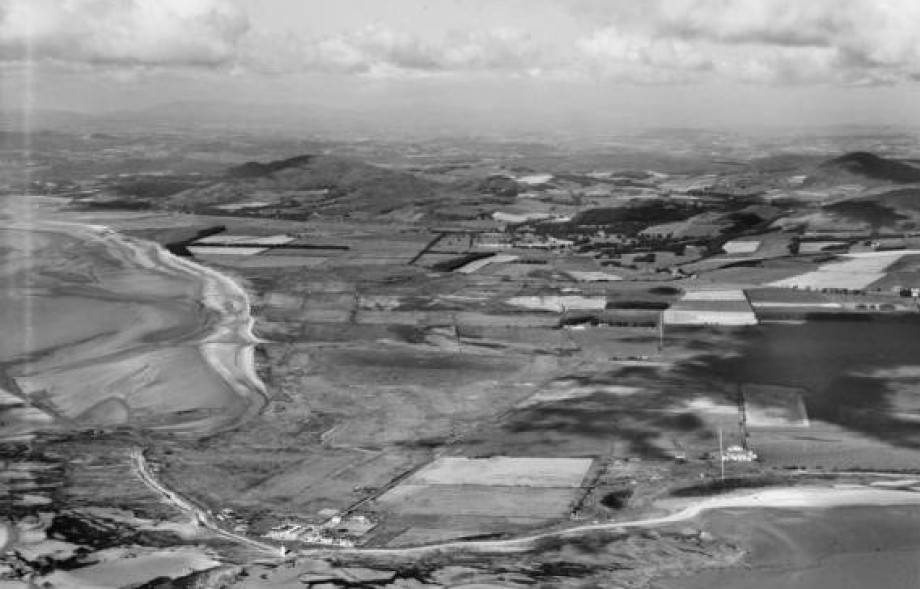 Southeness Golf Club.  Instituted 1913   . “The latest addition to the golf links of the Stewartry is a small course of seven holes which has just been laid out at Southerness. To this village not a few golfing visitors come annually, but the maintenance of a course with such a limited local population is a matter requiring some consideration, although it is stated that several of the district farmers have promised to become members, and that the venture would, from the benefits which would accrue to the neighbourhood, receive adequate support from the villagers and residenters in the vicinity. That there is ample land of a most suitable nature round Southerness for a very fine course is unquestionable, and, accordingly, the possibilities for a first-class course are considered very bright. In the meantime, a course has been formed on the farm of Gillfoot, adjacent to the village, on a piece of fine natural turf. The tenant is Mr McLeod, who has provided a large field on which a seven-hole course has been laid out, but if the success of the venture warrants, there is ample additional ground which can be taken in to allow the links to be extended. A reaper has been in use, and a narrow fairway has been cleared. The whole course is practically level – there are no dykes or hazards to negotiate. At present the greens are very rough, but with the necessary attention, an improvement in this direction will soon be apparent. The approximate length of the holes is as follows:- First---260yards, Second---320 yards, Third---160 yards, Fourth---230 yards, Fifth---250 yards, Sixth---210 yards, Seventh---160 yards. Total---1590yards.” (DGSA 16.4.1913)

A meeting of members and others interested in this golf course was held at Southerness on Saturday. The possibilities of the course were fully discussed, and it was agreed to improve the course so as to encourage visitors to join. The course is capable of being a very good one, and the suggestions made all tend towards the improvement of the ground. The situation is ideal, and there is but little difficulty to contend with as the lie of the land forms quite a natural links. The club is only in Embryo, but its development is sure, and golf in addition to the other attractions of the quiet seaside village will assist greatly to boom the place. The greens are as yet unmade, but steps have been taken to have these and the tees attended to, so that the approaching season for visitors to the seaside village will no doubt see the necessary improvements made, that are required for the game.

A stroke handicap competition was held on this course on Saturday evening,16 players taking part.A very keen and enjoyable game yielded the following results 1. Mr McLeod, Gillfoot ; 2. Mr Blair, Edinburgh ; 3, Mr Murray, Dumfries ; 4, Mr Brown, Ladyland. Miss McGowan, Dumfries, was first of the ladies. The prizes being given by Mrs McLeod, Gillfoot and Mrs Brown, Ladyland, respectively, the husbands of these ladies stood aside in favour of their runner up.The Captain of the club, Mr G.F. Wilson, Dumfries, proposed a vote of thanks to the donors of the prizes, which was heartily accorded.

A challenge having been received from Kippford and Rockliffe players to meet them on the above course on Monday 17th inst, the Southerness club were ready in full force. The first contingent arrived from Rockliffe soon after 11am, and under the Captaincy of Mr J. Johnstone, Glasgow, a foursome match was played before lunch which resulted in a complete victory for the Southerness veterans. After a splendid lunch, purveyed by Mrs Clark, Sunnyside, Play was resumed. This time the tables were turned and the visitors won by 7 games to 3. The match was greatly enjoyed by all ; and the course being in fine order, lent itself to very keen play.

On Thursday first, the Southerness club visit Kippford and play a return match, the proceeds to go to the red cross funds of the respective parishes.

On Friday evening a handicap tournament took place over Southerness course. The game was got up specially to assist the local funds in providing comforts for our troops. Through the generosity of Mrs McLeod, Gillfoot ; Mr Mogerley, Dumfries ; and Miss Rice, Dumfries, Hansome prizes were provided. A keenly contested and most enjoyable game resulted in the following winning prizes :- 1. Mr Mogerley, 2. Mr Bertram McGowan ; 3, Mr William Goldie. The ladies prize was divided between Mrs G.T. Wilson and Miss McGowan, Dumfries. The sum of 13s 6d was handed over to Mrs McLeod, who divided it between the local Y.M.C.A., And the women workers to purchase materials to be made into comforts for the troops.