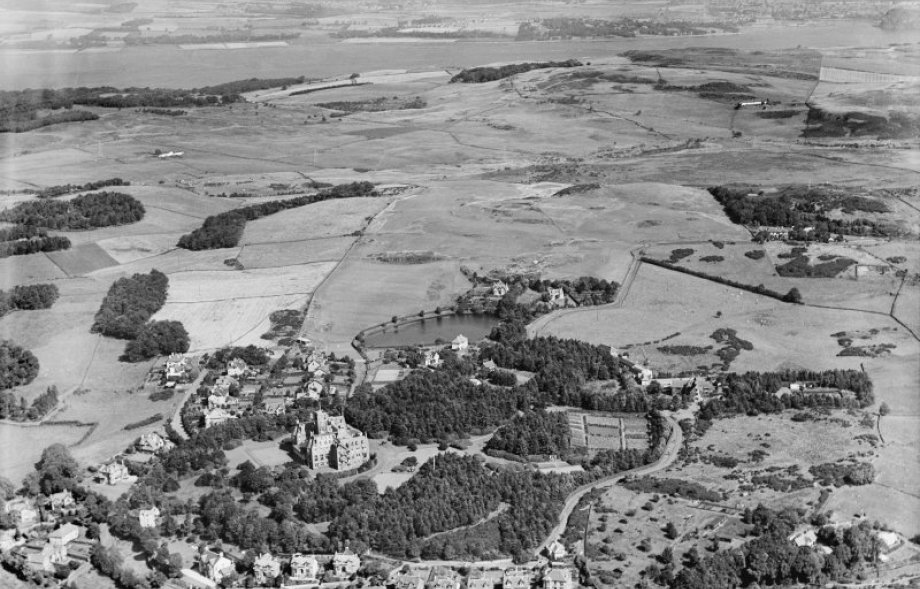 Kilmacolm Hydro Hill Golf Club.  Instituted 1927.  A 9-hole course, in the grounds of the Hydro.  Initially the course was merely an extension to the facilities of the Hydro but in 1928 a Committee was organised and thereafter it was run as a club with events and competitions. 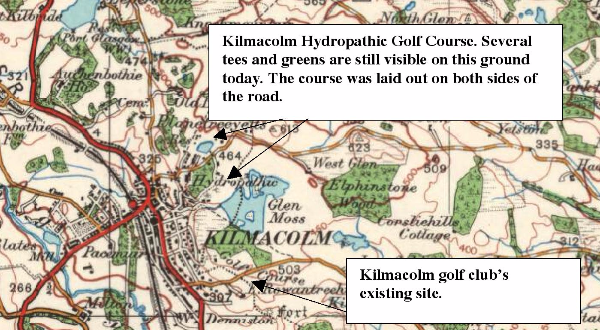 "With an afternoon of blazing sunshine to serve for baptism, there was on Saturday formally added to the list of golf courses in the West of Scotland the new nine-hole “ Hydro Hill” course which has been laid out on the moorland forming part of the grounds of  Kilmacolm Hydropathic. The course, already a marvel of speedy construction in the golfing sense, enjoys a fine situation among some of the most beautiful scenery in Renfrewshire.

It was officially declared open on Satuday before a large gathering by Lieutenant Colonel A.D. Mcinnes Shaw, M.P. for West Renfrewshire. In wishing success for the course, Colonel McInnes Shaw said that nowadays, when everyone was going in for tennis and golf, it was an exceedingly good thing that they should have more courses open, and there was a great deal to be said in thanking the directors of the Hydropathic for their enterprise in giving Scotland another golf course.

Mr T.L. Duff, chairman of the Hydropathic directors, who introduced Colonel McInnes Shaw, said that the directors had thought that the course was a necessary adjunct to the Hydropathic. He hoped that next year they would have the pleasure of introducing them to a beautiful new club-house and that in the course of time they would be able to extend the course to 18 holes.

The first ball was driven on the new course by Mrs Duff with a club presented by the directors and bearing an inscription on a silver clasp round the shaft.

Thereafter an exhibition four ball match of 18 holes was played by David Adams, the well known Glasgow clubmaker and course constructor, under whose direction the course has been laid out ; David Livey, the East Kilbride professional ; Mr J.D. Hollis, of the Hydro Hill club ; and Mr J. Osborne Martin, Captain of Kilmacolm club.

All were driving a fine ball from the tee, and though erratic putting on greens as yet immature added not one but many strokes to the course, the fairly large “ Gallery” which, along with the players got an insight into the essentially sporting character of the nine holes, enjoyed a keen game. Adams and his partner, Mr Hollis, won eventually by three and two, with a best-ball score of 72 against 75.

The course revealed itself in quite amazing order, for it, has had so far only the ten weeks work of some 12 men in the task of transformation from untouched moorland. It is, however, a natural golf course – the spring in the fairways with the sturdy and firm foundation of hill ground, and the fact that only two of the greens have required to be turfed showed that. Much of the work went in the removal of large stretches of drystone dyke. Not one of the holes shows the same level from tee to green and from the highest point on the course at the seventh green a wonderfully fine panorama of hills and wooded country lies spread before the golfer. Ben Lomond lifts its sheer mass at one corner of the picture, and the vista stretches even to the heights of Perthshire. A scheme of bunkering, which is to be entered on soon will completed the course until extension is considered. Mr A. Crawford has been appointed as greenkeeper. The Hydro Hill membership, which is open to all golfers, already exceeds 100."   (GH 18.7.1927)

The Paisley and Renfrewshire Gazette carried as comprehensive a report of the opening on Saturday July 23rd, 1927 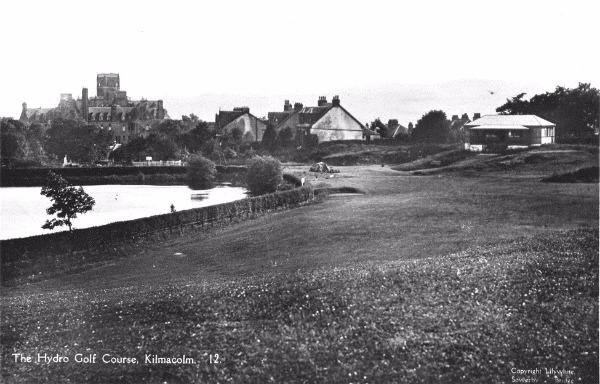 Kilmacolm Hydro Hill Golf Club.  Instituted 1927.  A 9-hole course in the grounds of the Hydro.  Initially the course was merely an extension to the facilities of the Hydro but in 1928 a Committee was organised and thereafter it was run as a club with events and competitions.

The interesting feature is the bogey of three and a half for the second and eighth holes.  only one other club has been found to use this valuation.

In a letter to the Editor of Golf magazine in 1893 entitled "Handicapping - The Value of the Half Stroke: the sender wrote:

The Membership peaked at 200.

The club closed in 1949 and after a period of storage in the local bank vaults, the trophies were transferred to Kilmacolm Golf Club..