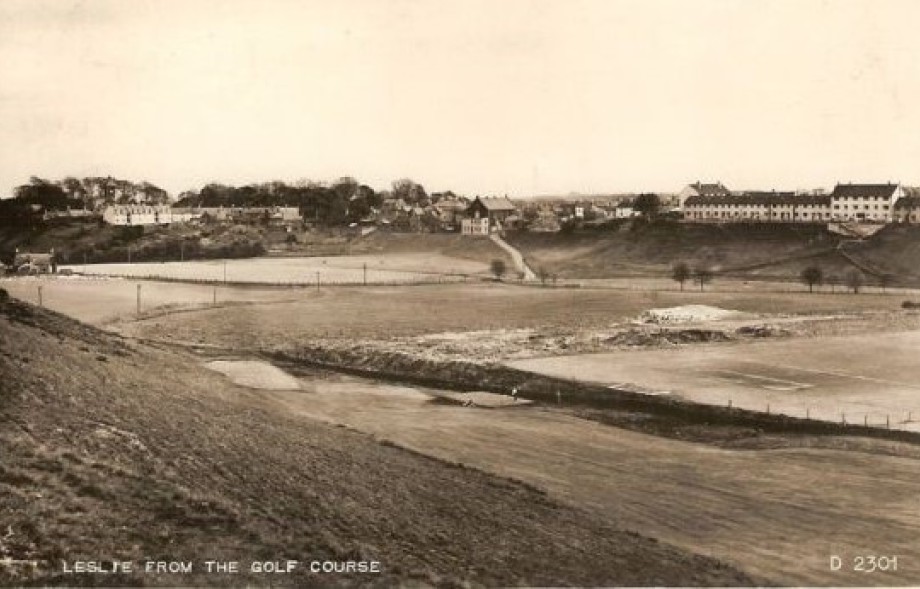 In 1863, or earlier, a number of citizens, calling themselves the Leslie Golf Club, were playing golf on common ground in the town. There was some objection to this and the group petitioned the Town Council to be allowed to continue:

To the honourable Bailies and Town Council of Leslie.

Gentlemen, We the undersigned members of Leslie Golf Club and residing in Leslie, having for some time past have been engaged in prosecuting the above game on the “ Back Braes” generally called ‘ a common’ (but the sole right of which we have learned belongs to the feuars of the old town of Leslie) have been prohibited from proceeding with the game on the plea of damaging the grass.

We beg to state that from the nature of the game and having to pass over a long range of ground our extreme points being from Prinlaws school to the Gasworks and merely walking over the turf and not always at the same place cannot therefore in the slightest degree affect its growth, and As there is no other suitable place, for such a game in the vicinity of Leslie – and having already been at no small expense for the carrying out the game, and each of us being deeply interested in the continuance of it, we feel confident in the circumstances you will grant us permission for a reasonable annual compensation.

We have the honour to be 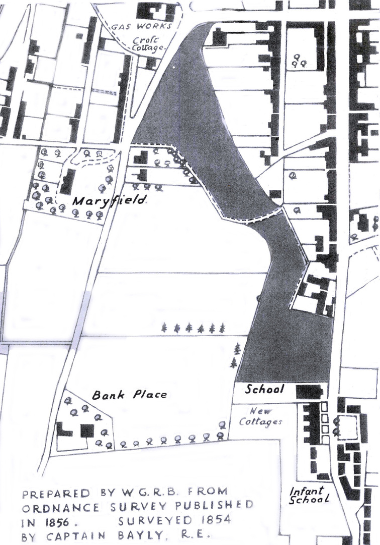 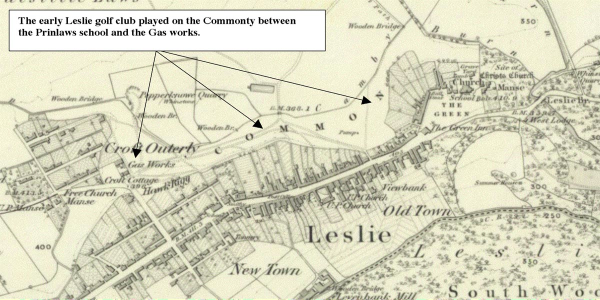 Permission to go on with the game is granted by the Bailies until further notice.

Sederdunt – William Watson, M.D.; John Gordon, druggist; William Jackson, inspector of poor; John H Miller, draper; Alex Gilchrest, mill spinner; and James Kidd, merchant. Mr Gilchrest, presided and Mr Jackson acted as clerk. The meeting unanimously resolved to form themselves into a golf club, distinctive appellation to be afterwards determined, and Dr. Watson, Mr Gordon, and Mr Miller - Mr Miller, convener – were appointed as a committee to prepare rules and regulations to be submitted to a meeting of the club to be held not later than two weeks hence.  After a vote of thanks to the chairman, the meeting adjourned to their mornings play, and were shortly joined by others when the embraces of merpheus had detained from attending the business meeting.” (FA 21.5.1864)

"A meeting of the members of this club was held in their ground on Thursday morning - Mr Benjamin Fawcett, presiding.  Rules and regulations prepared by the committee appointed for that purpose at last meeting were submitted, and, with some slight alterations, adopted as the condition of the club.  The following office bearers were then elected:- Mr John H Millar,Captain; Mr W M Jackson, secretary; Mr John Gordon, treasurer; and Dr. Watson and Mr. B Fawcett, members of committee. The competition of the club medal was appointed to take place on Thursday, 9th current, play to commence at 6am.  A vote of thanks to Mr Fawcett for presiding concluded the proceedings.” (FA 4.6.1864)

“The Leslie Golf Club competed for the club medal, on Thursday morning, by playing four rounds of the ground.  Ten members competed.  The following is the scores: -

“A competition for a number of prizes presented by a few of the members took place on The Commonty on Saturday, four rounds of four holes each being played by each member.  The following were the prize-takers :-

“The annual meeting of this club was held on the 20th curt., when the following gentlemen were elected office bearers:-  J H Miller capt; W M Jackson, secretary; John Gordon, treasurer; James Hutchison and Thomas Horne, members of committee, and Samuel J Elder, auditor: Messrs Thomas Pringle, W Whitson, and Alexander Peattie were admitted as members.  Master Alexander Wyllie, West Park, presented to the club a package of marking cards, John Gordon druggist, presented a Cleek, and Mr James Hutcheson presented two balls.  The thanks of the meeting were awarded to these gentlemen for their presents.  The clubs medal was competed for on the 20th curt. When the following was the result:-  J H Miller, 112 : E Murray, 136 : James H Elder, 138 :  John Gordon, 162.  On Tuesday last, the 25th instant, the cleek, presented by Mr Gordon was played for, and the two balls, when the former was gained by J H Miller, and the latter by J K Elder, the results stood thus :- J H Miller, 50 :  J K Elder, 55 : A Webster,61 : T Horne, 69 : J Gordon, 76 :  J Kidd, 77 :  Alex Webster, 83 : W Jackson, 84 : Samuel James Elder, 88.  Mr Gilchrist presented the club with five balls and a cleek, which are to be played for on Thursday, 11th May.  Mr J Miller having resigned his appointment as captain, Mr Gilchrist has been elected in his stead.  The ancient and manly game of golf seems to be very popular here at present, and, although our back braes are not the best suited for the game, still good sport is had.  Our players are using every effort to train themselves and master the game in such a way that, by the end of the season, they proposed challenging, and expect to beat, the Leven Club.” (FA 29.4.1865)

“On Monday morning, a match for two prizes presented by Mr J H Miller and Mr John Gordon was played on the links.  The weather was rather unfavourable, the ground being very wet.  After a keen competition, the winners were found to be Mr Miller and Dr Purves, who scored 61, and 64 respectively.” (FA 12.8.1865)

In July 1887, the Games Committee of the club was composed of:

On 8th July 1887, the club received the following missive from the Town Council:

1st  The Games Committee may have the use of that portion of the Commonty   lying to the east of Cambie Bridge, called the Meadow Acre.

2nd The Bailies and Standing Committee of the Town Council of Leslie cannot see their way to grant any other portion of the Commonty for the holding of games at this time.

3rd That the Games Committee arrange for three of their number to consult with the Standing Committee of the Town Council on the 9th inst at 8.30pm – meeting to be held at the residence of  William Chambers, Saddler, Junior Bailie.

The above documents are held in the Fife County Archives, Markinch. Since there are no further references to the use of the  Commonty, it is a reasonable assumption the the portion of ground offered was not considered adequate enough, and it is likely that the club ceased its activities thereafter, nor are there any further reference in the Fife Advertiser to this club, or of golf in Leslie, until 1898, the date of the foundation of the present club.