Bridge Of Weir and Ranfurly Ladies

Bridge of Weir and Ranfurly Ladies Golf Club.  Instituted 1896.  “A 9 hole course on the Horsewood estate, overlooking the valley of the River Gryffe, ten minutes walk from the station.  The hazards are walls, hedges and ditches.  A little pavilion has been completed.“   (GA1895-96) 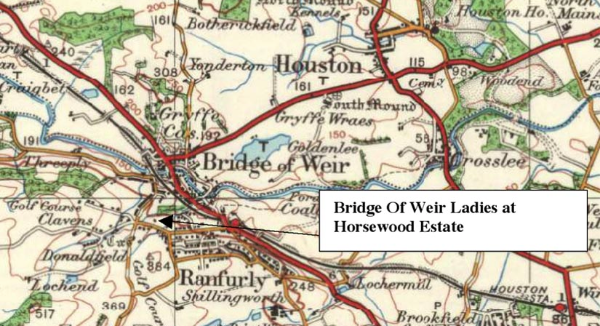 Although Ranfurly Castle Golf Club had been going for seven years, Ladies were not allowed to play there. So the local ladies formed their own club and took out a lease on a piece of land at Horsewood, owned by a Miss Finlay. Surprisingly, they were greatly assisted in their venture by the gentleman from Ranfurly Castle., When the course was formally opened the membership was over one hundred. In 1905 it became clear that the lease was unlikely to be renewed and so an offer to leases some of Ranfurly Castle’s land was accepted. Play on the new course started in 1906 and a modern clubhouse was erected. The first two holes were parallel wit the last two of Ranfurly Castle. The third crossed the Barnbeth Road, and the fourth went down to the valley of the Powburn, near Caiddside, an old farmhouse no longer in existence. Returning uphill, the fifth green was on a plateau, which provided a lot of amusement for those who pitched too far or too wide. The sixth hole provided no hazards for the good or moderate player. Recrossing the road again were the three home holes running alonside Barnbeth Road. (An extract form the Club history reproduced by kind permission of Ranfurley Castle Golf Club).

“A 9 hole course on the hill above Ranfurly.

Hole No. Length in yards Bogey