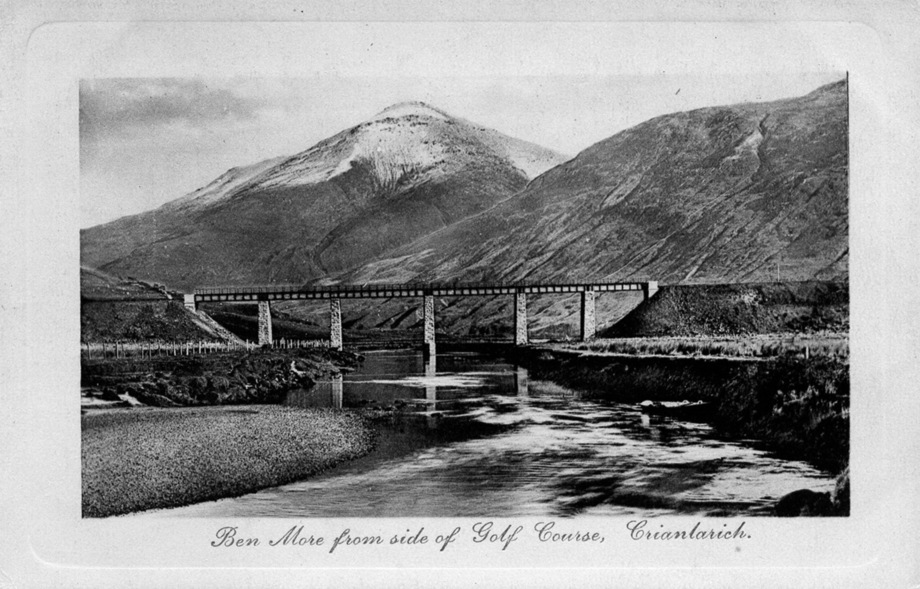 Crianlarich Golf Club. Opened 1910. A 9-hole course owned and operated by the Crianlarich Hotel. “The energetic proprietor of the Crianlarich Hotel was quick to respond to every opportunity, and by 1910 was already providing facilities for the motorist - his hotel was "Headquarters of Automobile Club", providing both garaging and petrol for its guests. Describing Crianlarich as the "Scottish Mountaineering Centre", Joseph Stewart offered excellent fishing for both brown trout and salmon and also a "Splendid” 9-hole Golf Course in connection with Hotel, laid out by Willie Fernie,Troon." 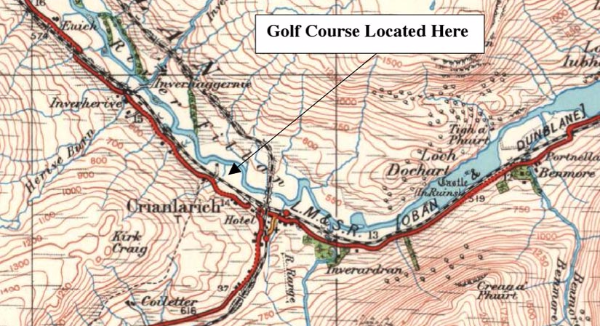 “The final tie for Taylor’s medal in connection with Crianlarich golf club was played yesterday afternoon, in delightful weather, between Messrs Peter McIntyre and John Rae. The course was very tricky, and high scoring was the rule.

“The final of the Scott medal was played off overCrianlarich course between Peter McKenzie (10) and Alex Morrison (6). After a most interesting and close game, Mr McKenzie won by 2 strokes. The match for the Loch Dochart trophy has been postponed so as to permit of the present holder, Mr Leslie Christie, son of the donor, being present to contest it. He is on holiday at present.”    (Scotsman 4.9.1911)

"The annual concert in connection with the Crianlarich golf club was held last Friday evening in the hall. Rev. Mr Boyle, North Leith United Free Church presiding. There was an excellent attendance of visitors and residents. Mr David Dow, Auchreoch, opened the proceedings with a bagpipe selection which was played in Mr Dow’s usual capable style. Mr McLay, Comedian, Glasgow proved himself a splendid entertainer with songs mostly parodies on “ The Auld Hoose” “ Home Sweet Home” etc. Miss Cameron, Leadharry, favoured with a Gaelic selection, which showed a thorough knowledge of pronunciation and harmony. Mrs McLachlan, with admirable precision and sweetness, rendered a pianoforte selection, mostly scotch, and was much applauded ; while her daughter, who is possessed with a beautiful soprano voice, rendered, “ The Swallow” to perfection.

During the present month a large number of visitors take advantage of the ideal weather to improve their merits on the course.”    (Oban Times 12.7.1913)

This course has never been recorded in the golfing annuals, and no further references have been found so it is assumed that the club did not survive WW1.