Blackridge Golf Club. Instituted 1909, the club had two courses; firstly at Craighill, in use for barely a year, and then at the Quarries. 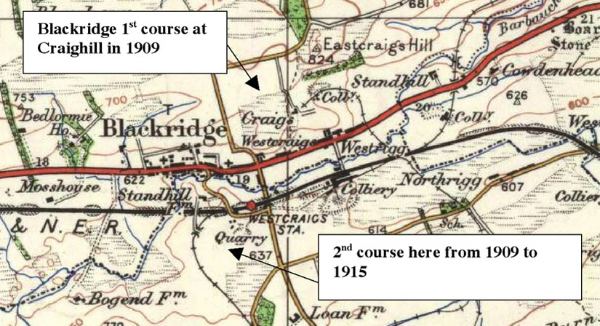 “On Tuesday night a meeting was held in the schoolroom for the purpose of forming a golf club. It was well attended by both ladies and gentlemen. Mr  D. Murphy was appointed chairman.

Mr Murphy explained the purpose of the meeting and what had already been done in the way of arrangements. Mr A. McKee reported that he had about forty names of intending members.

It was agreed to go on with the club.

It was decided to have an opening celebration on 3rd September. The chairman was accorded a vote of thanks, and the meeting was closed.”   (WLC 9.7.1909)

"On Monday night a meeting of the Blackridge golf club committee was held, and it was decided at it to select another playing course. Most of the members of the club who had already played on it, found Craighill to be unsuitable. The new course is immediately behind the quarries at the station, and extends to the crossroads in Harthill direction, and to the Shotts branch railway on the West side. The turf is very good upon it, and with very little work, Blackridge should have a very good 9-hole course."   (WLC 16.7.1909)

“On Wednesday afternoon the members of Blackridge Golf Club and friends were present at the formal opening of the new course. Rev. Mr Dewar, Blackridge, after an appropriate speech, declared the course open.

At the close of the match the visitors were entertained in the public school. At the social, there was a large turnout. After a very enjoyable tea, Mr R.M. Brown, who acted as chairman, called upon the following ladies and gentlemen to take part in the programme: - Miss C. Strang, songs, “ The Dear Little Shamrock” “ The Childrens Home” and “ Daddy”

Mrs Jenkins songs, “ Scotland” “ Come back to me” and “ Killarney”. Mr T. Bannerman songs, “ Hurrah for the Highlands” “ Good Company” and “ Sing me to Sleep”. Mr J. Drysdale songs, “ The Veteran” “ When the ebb tide flows” and “ Annie Lawrie”.

Mr Culbert, Armadale took an elocutionary part, and had a good reception, his pieces being “ The Bishop and the Caterpillar” and “ The man and Horse”. Mr W. Hawson, Harthill, gave some very fine exhibitions of Indian club swinging, the one with the fiery clubs taking very well.

The programme finished up with the Rev. Mr Gordon asking the usual votes of thanks. Mr Jack Brown was the pianist. Then a good number repaired to Murray’s Hall, where they indulged in dancing until well on in the morning.”

The members of the Blackridge club last week played for the medal donated by Mr John Middleton, Burnside Cottage, Blackridge.  The best score handed in was 54, made by Mr William Drummond, who is thus the first winner of the medal."   (WLC 24.9.1909)

"Last Saturday the above club had as their visitors in a mixed foursome match the Armadale Club.  The weather was dull, but dry overhead:  One round was only gone, as the grass on the course was wet.  The results were as under :-

At the close of the game the visitors par-took of tea in the Public School.  After tea, the following ladies and gentlemen contributed to a very enjoyable programme:-

A ladies competition has just been finished.  Miss J. Edwards was successful in gaining the first prize a “putter.” Presented by Dr Anderson; and Miss Cleland, second, a ladies sewing companion."   (WLC 1 10,1909)

“For some time there has been some talk of starting a golf club in the district, and at last something definite has been arrived at. West Craigs United Football Club had their eyes on a field at the Craig Inn, for football, and when they approached the United Collieries Company to see about it, they also mentioned the idea about a golf course. The company’s official who attends to these requests for recreation grounds, etc., has been over the ground, and says that there ought to be very little trouble in securing the Craig Hill for a golf course, providing a sufficient number enrol to show that there is really a desire for a golf course. As for the football field, negotiations are still going on about the ground.

The company have generously offered to lend a hand in both projects. What is wanted is local enthusiasm, especially about the golf course. Mr S. Osborne is taking a list of names, and there ought to be no trouble in getting about forty names. The Craig Hill would make an ideal 9 hole golf course.”   (WLC 16.3.1923)

No references have been found to verify if this project went ahead, but it is interesting to note that the club were now willing to accept the site on Craig Hill, which, years earlier, before the war, was deemed unsuitable.