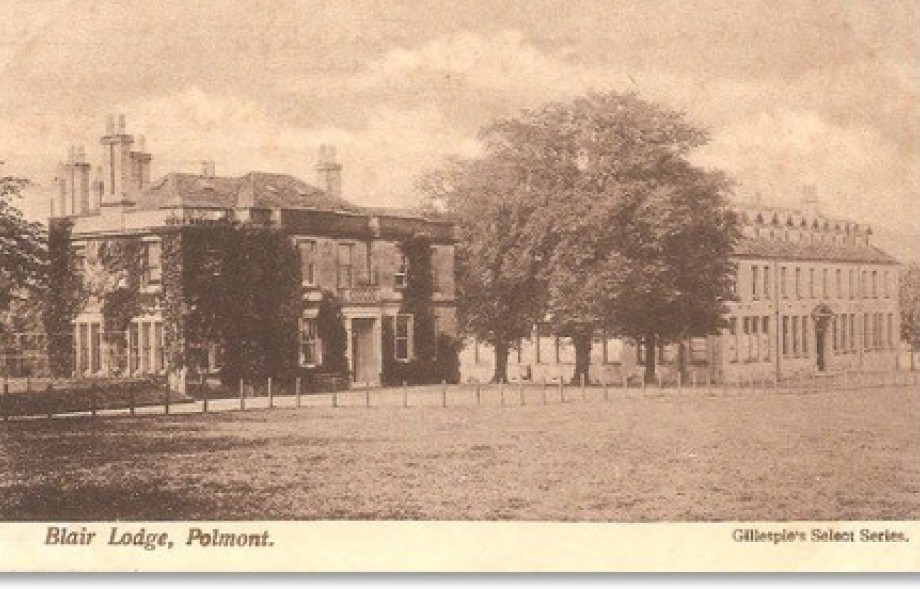 Blairlodge Academy was opened in 1843 by Robert Cunningham, a Church of Scotland minister, who also played a significant part in the Free Church breakaway in Polmont in the same year. The new school was for boy boarders and flourished under an innovative and dynamic headmaster J Cooke-Gray who bought the school in 1874. Modelled on the English public school system it attracted the sons of some of Scotland's wealthiest families and, inevitably, cricket and rugby were the principal sporting activities of the three hundred pupils. But there was an admirable practical strain to the curriculum and an emphasis on science which was unusual for the period. At the turn of the century Blairlodge was the largest school of its kind in Scotland and was the first to use electric lighting on such a large scale - it had nearly nine hundred bulbs at the same time as the people of Falkirk were being shown electric light as a novelty in a church bazaar! The pupils who left Blairlodge entered the privileged world of the Colonial Service, Oxford or Cambridge or into the upper echelons of the commercial world. After the death of Cooke-Gray in 1902 the school experienced financial difficulties and when it was forced to close in 1908 by an outbreak of an infectious disease, possibly measles, it never reopened. The buildings were purchased by the Prison Commissioners in 1911 and shortly afterwards opened as Scotland's first Borstal. It is now Polmont Young Offenders Institution.

Blairlodge School Golf Club.  A 14 hole course laid out by Old Tom Morris in 1891, on Roughhaugh 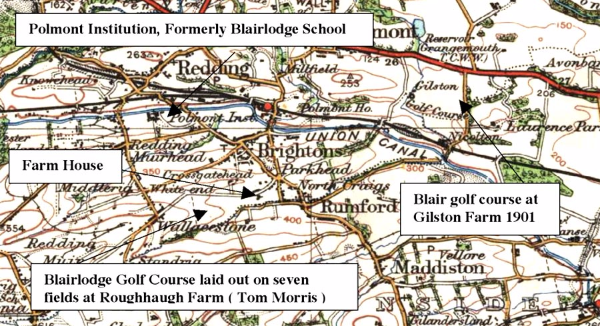 “Mr Cooke-Gray, head of the institution, is one of the most enterprising of men. He is at all times thinking how best he can improve and add to the attractions of the establishment which his energy and his foresight have built up. Blairlodge does not require a golf course to put it in the forefront of public school athletics North of the Tweed. It occupies that proud position already. But yet a golf course it is to have, and it was with the special object of getting ground for the “ Royal and Ancient” game that Mr Gray secured a lease of the farm of Roughhaugh, lying in the immediate vicinity of the school and extending to between sixty and seventy acres. As it is, there is no lack of playing fields in connection with Blairlodge, indeed, it would seem that Mr Gray has gone on the principal of acquiring ground, provided it was suitable for one game or another, whenever opportunity offered, and the result is that in respect of the facilities it already affords for games of all kinds, Blairlodge need fear comparison with no other establishment of its kind. . In these days, when golf is a game practiced by all ranks and classes, a boy’s physical education is scarce complete unless he can handle a club.

The school entered last week into possession of the farm, which consists of some seven fields entirely in old pasture ; and no time has been lost in setting about the laying out of the course. The other day our golf reporter went over the ground, and at the end of last week it was carefully examined by Tom Morris of St Andrews, who expressed himself very favourably impressed indeed with the scope which it affords for golf. 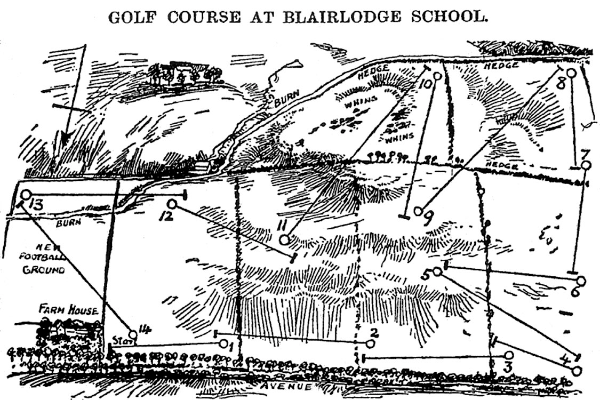 The natural lie of the ground at once suggests such a course as is set forth in the above sketch, which follows on the lines recommended by Tom Morris – the round being restricted, meantime at least, to one of fourteen holes, so that some long and difficult holes may be obtained. In this case, as there will never be anything at all approaching to congestion of players, nothing whatever is lost by departing from the orthodox number of holes. The ground rises very gradually from the starting point to the fourth hole, with a slight fall in the centre of the Westmost parks – the several fields being devided by thorn hedges, thick and high in some places. Over these hedges the line of play lies in the case of nearly all the holes, and these, as well as the hedgerows bounding the farm, will afford excellent hazards.

The ground from the seventh hole, again, has a slope towards the burn which forms for the greater part the boundary of the farm on the south, and which in the case of the thirteenth and fourteenth holes gives a charming hazard, to be avoided in one instance with the approach, and to be carried in the other case from the tee.

In the Southmost part of the ground the hazards are whins, and these, it has been rightly decided, to leave unmolested, at least so far as actual rooting out is concerned. The bottom, with the exception of one small portion in the centre of the Westmost park, is firm, and the turf is close and tough, more particularly where it has been sufficiently grazed. At some places, of course, the grass is at present rough, but once it has been run over with the scythe, and play begins, there will be no more difficulty in keeping it close than is experienced on, say the the Braid Hills. It is intended to go thoroughly about the work of laying out the course, and money will not be spared in putting the ground into order for the game. Where necessary the turf will be lifted, and the putting greens levelled and relaid, and with the amount of care which will assuredly be given them, they should become excellent in a surprisingly short space of time.

Indeed, the course promises to be in every respect admirable for the purposes of golf, and the exercise of the game will be the more health-giving, because the ground, picturesquely situated, lies pretty high. The average length of the holes is nearly 250 yards, and the total length of the course is about two miles.

The prospect of having a golf course at their door, so to speak, is being eagerly looked forward to by both masters and boys, and there is not a doubt that it will be greatly taken advantage of. At present the nearest golf course to Polmont is Stenhousemuir, some eight miles off, but as a round there means the giving up of half a day, it is only very occasionally taken advantage of. It can be understood, then, that the opening of the course will be a great event in the community of Blairlodge, especially as the possession of the farm means, over and above, that there will be two additional football grounds for the use of the school."   (GET 8.9.1891)

In 1893 Mr Cooke-Grey opened the course to local people who formed a club, The school retained playing rights within the club.

Blair Golf Club.  Instituted 1893.  A 9 hole course on Roughhaugh, half a mile from Polmont station.

The course had begun to deteriorate and in 1901 the club relocated and changed its name to Polmont Golf Club.

“The new 9 hole course which has been laid out on Gilston Farm, near Polmont Railway Station will be formally opened tomorrow afternoon.  The turf is good and the subsoil consists of sand and gravel. The ridges are sea banks or glacial drifts, and they add to the sporting character of the links.  Judging from the sketch, I think the order of playing the holes will have to be altered. There is far too much distance between the seventh green and the eighth tee.  If the ridges are broad enough, two or three greens ought to be formed on top of them.  Plateau greens are more difficult to approach than those in the hollows or on the flat.  The pavilion appears to be too far from the starting and finishing posts.”   (GET 1901)