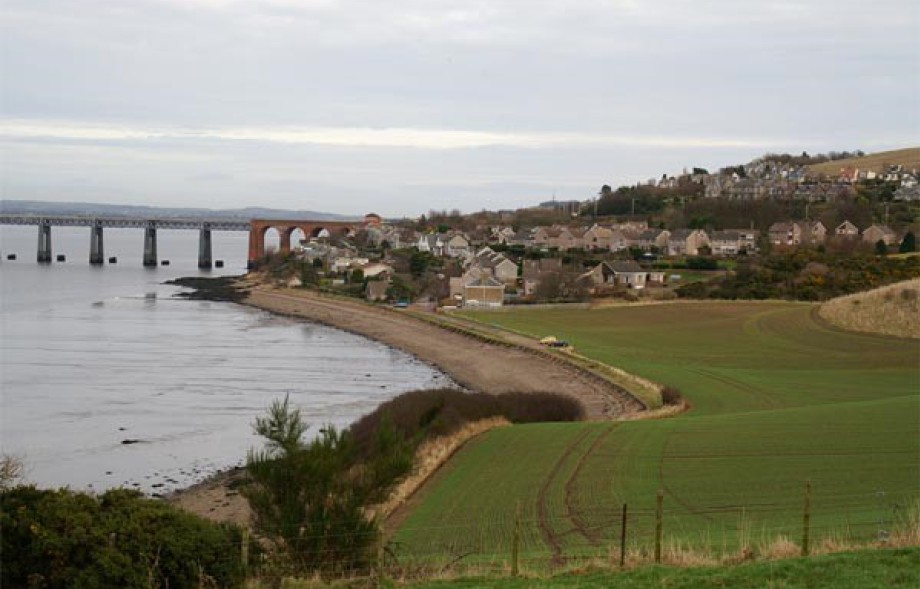 The promoters of the Wormit Bay Golf Course have been negotiating with the proprietors of the ground at Wormit Bay, and it is understood that the terms of the lease have been practically agreed upon. The ground cover fully forty acres, and over this a nine-hole course will be laid out. The course is situated in a large field at Wormit Bay, and extends South through the den to a point through the Guildry Road. It is fully expected that matters will be finally adjusted with the proprietors in the course of the week.

Is Launched By Residents In

The burgh of Newport is to get a golf course.

This was decided at a public meeting, last night in Wormit Hall, which was largely attended. Provost Leitch presided, and said they were met to give the proposed golf course their support, as it would be a great benefit indeed.

There was no reason why they should not get financial support in order to enable them to go on with the necessary work.  Mr W Cowley, who has been the pioneer of the scheme, thought he was right in saying that it was a dozen years or more since the proprietors were approached regarding ground in this neighbourhood, but some how or other negotiations fell through.  Mr Cowley then proceeded to point out the ground selected for the golf course, which consists of 26 ¼  acres in the bay and 14 ¾  in the den, equal to 41 acres in all, this being quite ample for a 9 hole course.  There is a river frontage of 500 yards, and the den extends south towards the Gauldry Road for 900 yards.  In addition to this, provision has been made for taking another two fields, containing about 34 acres which will enable them to complete an 18 hole course.

This additional ground is on the east or other side of the railway, to which access is got from the den by crossing under a level crossing.  This ground begins at Wormit Farm, and stretches right across to the Gauldry Road and has a width of about 313 yards at its widest part.  He had secured a lease for 14 years at 30s an acre, which amounts to £75, but he estimated that it would be reduced to £45 by letting it for grazing.  The provisional ground at the end of seven years would be 35s an acre.

At present 166 had intimated their intention of joining the club.

Mr A Auchterlonie, who had examined the ground, in the course of his report stated that the ground was most suitable for a golf course.  It certainly was rough but if a thicker crop of grass could be grown, and all the loose metal removed, quite a nice course could be made.  It would take £200 to complete the work, but he thought the sum would do quite a lot towards its construction.

Mr Cowley then stated that he would like in addition to what was already subscribed a further £300, as by that means they would not only have a really good golf course, but would be able to erect a club house.  Mr J Sturrock asked how much would be raised for capital.  Mr Cowley – it is all capital.

The meeting agreed that they should try and get a longer lease.  The Rev. Mr Coutts asked how long it would be before the golf course would be ready for play ?

Mr Cowley said they would get possession in October, and they could start at once on the temporary green.  Mr G D Macdougald said the whole community of Wormit and Newport were indebted to Mr Cowley for the great amount of work he had done in this matter.  He then proposed that they form themselves into a club for Wormit and Newport.

This was agreed to.

Mr George Scrymgeour said it was only fair to say that, as far as Newport was concerned, there was no want of enthusiasm on their part or want of ground in Newport.  The trouble they had experienced was with the landlord.

Text from Sketch Of Golf course

The promoters of the proposed golf course for the burgh of Newport have every reason to be satisfied with the meeting held last night in Wormit Hall. The want of a golf course has been increasingly felt for the past few years, and any likely ground suitable had been the subject of considerable discussion. Not, however, until the latest scheme at Wormit Bay was mentioned has there been any practical step taken.

It is satisfactory to note that everything points in the direction at no distant date of the golf course being an accomplished fact.

Considerable interest is being taken in the nature of the ground, and, while it is admitted there is a good deal of it covered with stones, the general impression seems to be that a suitable golf course could be made of the ground at the disposal of the promoters. This view is strengthened by no less an expert as Mr W. Auchterlonie, St Andrews, who, in the course of a report, states “ that the ground would be most suitable for golf. It certainly is rough at present, but if a thicker crop of grass could be grown and all the loose stones removed, quite a nice course could be made of it.

Considering the matter of expense. I venture to say that it would take £200 to complete the work. Nevertheless, this sum would do quite a lot towards its constuction.

The report is considered encouraging for the promoters, who have already received sufficient evidence of support to warrant them going on with the scheme and bringing to the residenters of the burgh of Newport the long-looked for golf course. 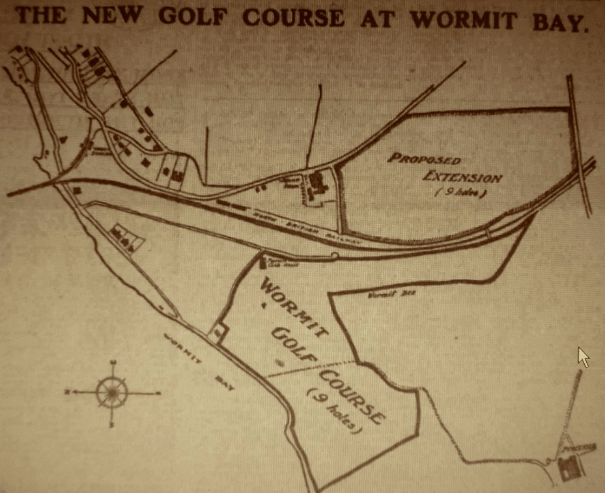 A meeting of the ratepayers of Newport to consider a proposal to acquire a golf course for the burgh was held in Wormit hall.

Provost Leitch presided over a large attendance. Mr William Cowley said the ground selected for the course consisted of 26 ¼  acres in Wormit Bay and 14 ¾  acres in the den, equal to 41 acres in all, this being quite ample for a nine hole course. Provision had also been made for taking in an additional two fields, extending to about 34 acres and this ground would enable them to complete an eighteen hole course. A lease had been secured for fourteen years at 30shillings per acre. Already 166 persons have intimated their intention of joining a club. Mr A. Auchterlonie who had examined the ground, reported that it was most suitable for a golf course. The meeting unanimously resolved to proceed with the scheme, and that an effort should be made to secure a longer lease than fourteen years. Mr Cowley said they would get possession in October, and could start at once on the temporary green. 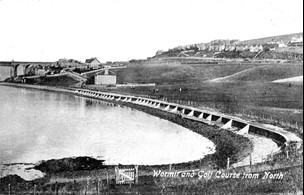 The golfing community of Wormit are pleased to notice that the ground selected for the golf course is being prepared for its formation. Lately a large contingent of Mars Boys have been employed in removing the large stones, and it is expected that in the course of a short time the ground will be ready for a professional to fix the direction of the green. Last night Mr A. Macrae, superintendant of Parks and Cemeteries, Dundee, visited the ground, and is quite enthusiastic regarding its situation and formation, and states that a strong feature is that there is no obstruction to take the eye of the golfer following the ball, and that the ground is in many respects superior to neighbouring courses.

Letters to the Editor

Sir, - can any of your Wormit readers give me any information about the local golf club ?. All other clubs are now busy with their competitions, and members of the Wormit club are still without the local rules and regulations necessar to make even a friendly game possible. A general meeting was promised months ago to consider these matters, and still we wait. Greens the size of postage stamps, laid largely with unsuitable turf ; stones, and holes where stones have been, are prominent features of this course. Can nothing be done with this easy-going council, which seems so careless of the interests of subscribing members ?. Are the members going to stir them up ? – I am &c                             Niblick.

In aid of Wormit Golf Course an old country fair was held on Saturday. The proceedings were formally opened Lieutenant – Colonel Scrymgeour Wedderburn of Birhill.