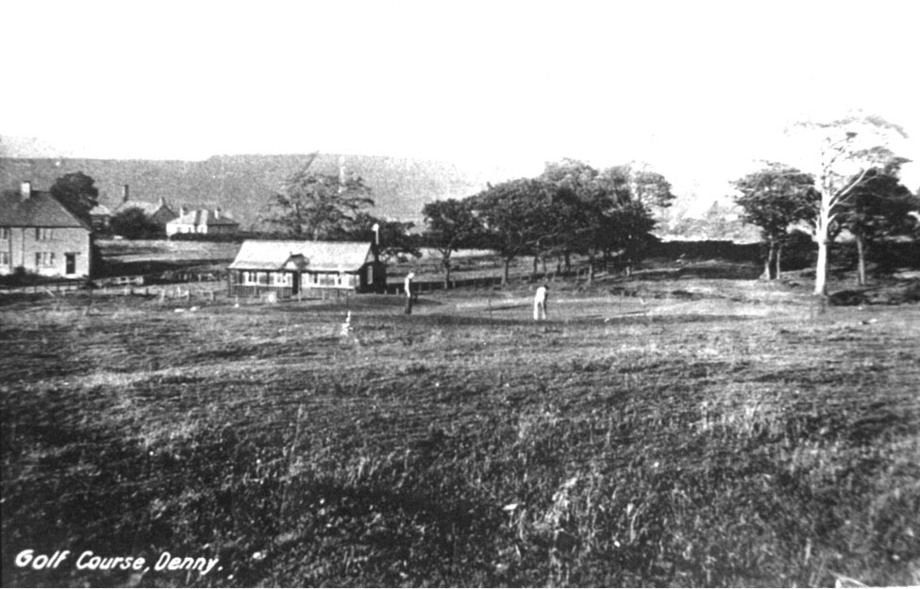 Denny Golf Club.  Founded 1896.  A 7-hole course on ground rented from the farm of Woodyet, half a mile from the town centre, 5 minutes walk from the station.

"A meeting of local gentlemen took place on Friday evening, presided over by Mr Bulloch. A letter was read from Mr William Forbes of Callendar giving his permission for the formation of a golf course on his lands, subject to arrangement with the tenants. The following gentlemen were appointed to confer with the tenants :- Colonel Logan, Wm Bulloch, J. Davidson, and James Luke."   (FH 15.8.1896)

"It was resolved to call in an expert to examine and report as to the suitability of the grounds proposed to be laid out as a golf course. This report, to-gether with a statement of the probable rents will come before a meeting on an early date.The expert appointed has given his opinion as highly favourable to one of the courses proposed"

Mr Bulloch performed the opening ceremony, and in the course of his remarks referred to an effort to form a golf club in Denny some years ago, and to the successful effort which had now been made to have this highly popular pastime established.

Having declared the course open, Mr Bulloch, amidst applause, drove a ball from the starting point. A foursome was afterwards engaged in – Mr Bulloch and Mr Shanks V Mr Davidson and Mr Hendry making the first round, the former couple winning. The course, which is located in the South-Western fields on the farm  of Mr A. Gentles, of Woodyet, is regarded by experts as excellent in every respect.

It’s smallness will be remedied in time, as it is intended to add more land to the East.

Over 40 members have been enrolled, and the prosperity of the club looks assured."

"The course is being very fully engaged, and the membership has been increased to over 50. Several golfers from a distance have been making a trial of the ground, and are highly delighted with the course in every particular"   (FH 3 10.1896).

Mr J.S. Davidson, of Bank Of Scotland, has been appointed Captain of the golf club. A constitution has been prepared for the guidance of members, numbers over 50."

Extended shortly after to 9 holes. 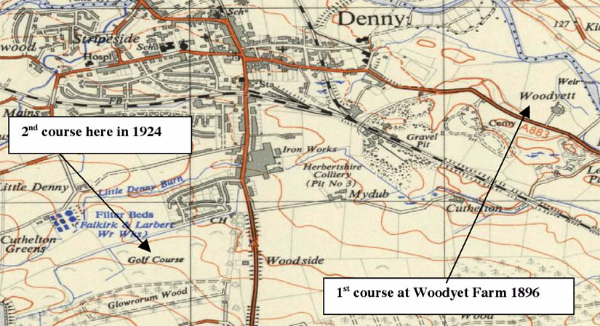 The course has been in use for some months, but until now access to the putting greens has been denied. The greens are now in good order and fit for play.

Councillor Henry Postie, Vice President, presided and suitably introduced Mrs Shanks to the large gathering of members and friends assembled at the first tee. The ball being placed in position, Mrs Shanks drove it straight and true in the direction of the green. She then, in a few graceful words, thanked the members for honouring her by asking her to take part on this occasion, declared the course open, congratulated the club on it’s auspicious beginning, and expressed the hope that the members might derive happiness and benefit from the game, and that there would be no lost balls. A vote of thanks was cordially responded to.

A “ Hole” match between sides representing the President and the Vice President, which followed, resulted in a win for the President. A heavy shower of rain somewhat marred the opening proceedings, which otherwise passed off most happily." 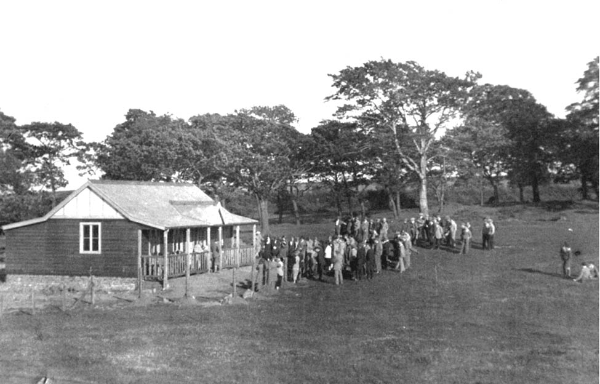 The opening of the new course at Glowrorum

'For business ability I would commend the Ladies of Denny. I was present for a time at their fete at Glowrorum last Saturday, and the first impression I gained was that the ingenuity of women was behind the whole effort. The organisation was perfect. Each individual slipped into his or her position and carried on like clockwork. For multiplicity and novelty of games and side shows calculated to extract coin from willing or unwilling pockets, the Denny fete will be hard to beat, and for the great success attending the venture the utmost credit is due Miss Campbell and her band of enthusiastic helpers. Mere man was, of course, called in to assist in the work, but the organisation was the Ladies part. It is they who have undertaken to raise the money necessary for the erection of a pavilion, and while Saturday’s effort was not on a scale to accomplish their aim, still they had made an excellent beginning. During the course of the winter they hope to add to their funds, and if the enthusiasm is kept up I have hopes of seeing that pavilion in the spring.

I must cofess I was astonished to hear that everything in the way of prizes had been gifted, handsome contribution of golf balls from various leading manufacturers being amongst these. Tea was served in a large marquee, and everything was tip-top. The purvey was generously provided by well wishers, and Mr Timmins of the picture house not only sent a piano, but an orchestra complete- a spontaneous deed, which was highly appreciated indeed.

And last, but by no means least, the Denny and Dunipace ex-service men’s pipe band also gave their services, and contributed greatly to the afternoon’s enjoyment. Truly, my Denny friends were in clover, and the efforts of all these good folks has resulted in raising the handsome sum of £110 or thereby, which, after sundry accounts are settled, will leave about £100 to be added to the pavilion building fund.

Denny course is one of nine holes, and I gather that the ground at their disposal meantime will not permit of extension. Before the present lease expires, however, the whole situation will have to be considered, and I hope before that they nwill have prospects of a full eighteen-hole course."   *FH 27.9.1924)

In 1956, the land was compulsorily requisitioned by the Town Council, and used for the building of the new Denny High School, on the understanding that an alternative site would be found for the golf club;