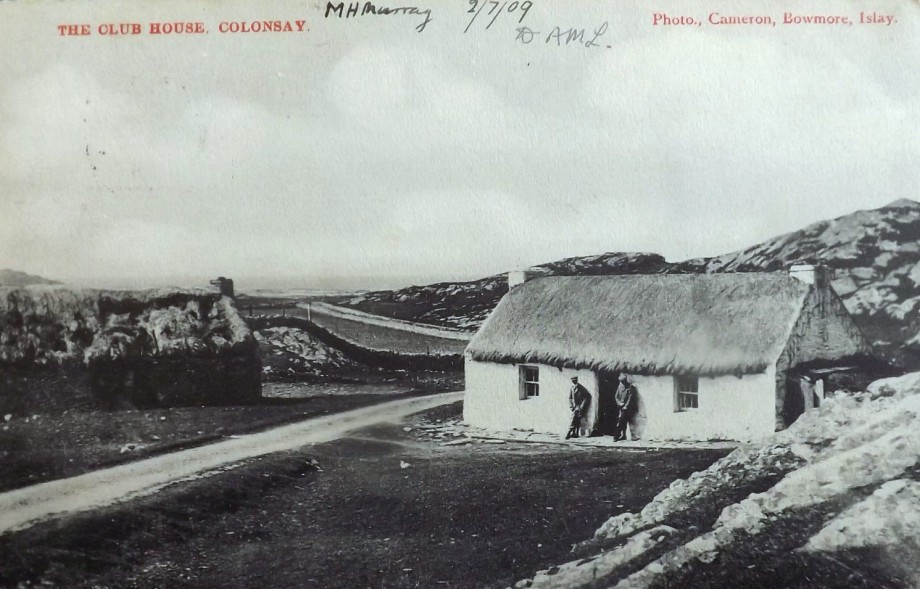 The old clubhouse at the Machrins

The 18 hole links (4775 yards) is on the natural machair and is completely natural, having been designed by the Supreme Architect of golf. The course is reputedly over 200 years old, and although play is restricted to members only, full membership is open to all. Cost is £20.00 per year, and there are no Green Fees. Membership is available at Colonsay Hotel, or at the Office of Colonsay Estate - there is also an excellent honesty-box arrangement beside the first tee. A map of the course is provided - a nine hole course is incorporated in the main course, as holes 1 - 5 and 15 - 18 inclusive.

The golf course at Colonsay is reputed to have been laid out in the early 19th century. It is an 18-hole links course (4775 yards long) and is situated on the natural machair.

Golf increased in popularity after the '45 and the course in Colonsay dates from at least 1775, when Archibald McNeill was the popular and ambitious laird, husband of a daughter to the Earl of Granard. Until the late 19 th century, the course varied a little from year to year and sometimes at the whim of the players - "The impious daring of the unfortunate Israelite who laid his hand upon the Ark of the Covenant furnishes the only parallel" . The Misses M'Neill, who ran the hotel, arranged for the greens to be mown and the tees maintained at that time.

In 1909, it was remarked by Murdoch McNeill that Machrins was the best-known locality in the island - "that stretch of undulating machair land that holds such a fascination for the golfer". In 1910 one James Tullo, of Edinburgh , made two strokes on the Y of a Younger's label, thus creating a three-letter monogram with the meaning of "You're Looking Fresh". This symbol was adopted as The Great Seal.

After the Great War, David Todd and other regular visitors - "The Colonsay Thiefs" - formalised the course and recorded the names of the holes. Clubs were stored and cleaned in "The Clubhouse" at Machrins farm, the thatched home of Mrs. McPhee. In 1935 the course was carefully mapped by J.S. Williamson of Troon; his annotation "Designed by Geo. P. Bryce", was perhaps a mere pseudonym for the Great Architect. War intervened once again, and it was according to the 1935 map that the course was re-opened in 1978. Slight modifications arose after the aerodrome was upgraded in 2006. 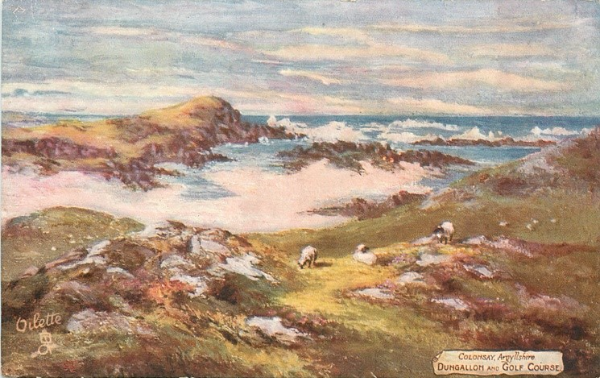 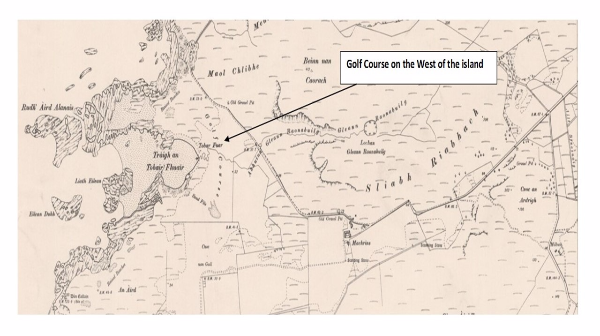 Incidentally, golf was also played at Balnahard, where traditions of the early links courses survived until the late 19th century. There were no fixed "holes" but the person who held the honour fired a bow-and-arrow and the embedded arrow became the "pin". The practice died out before the Great War and only the links at Machrins has remained in use.

"Why then does not everyone play golf? .If he has once spent a fortnight at the little hotel at Scalasaig, and had a dozen rounds on the Machrins Links he will return so convinced of the delights of the game that he will be determined to persevere in spite of crowds and critics." - A.E. Gathorne-Hardy, 1899 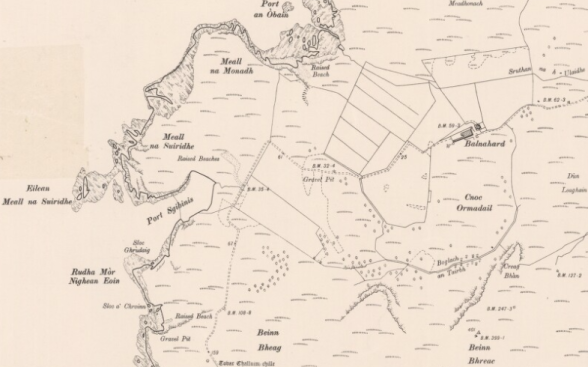 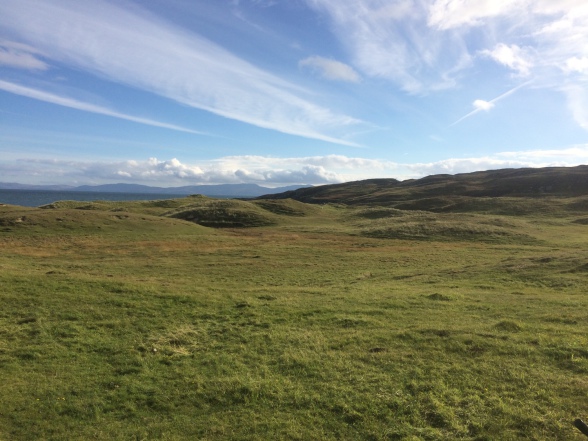 This photo shows the approx location of the old Balnahard links, and was kindly taken by the Grant family on our behalf whilst they were on holiday on Colonsay. 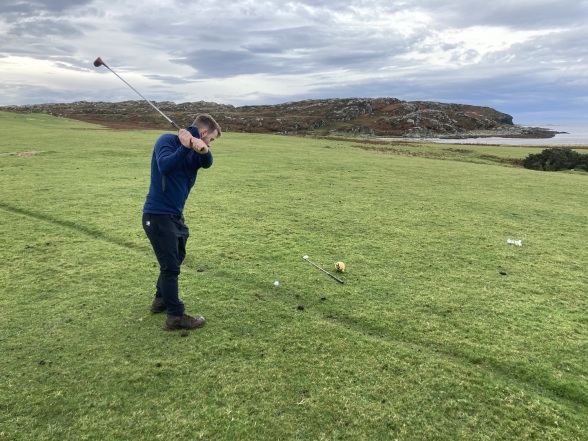 Calum Grant teeing off at Colonsay ( not a bad backswing but i have seen a video of him and it's a horror !!!!!!!

This is the Grant family from Peebles who go to Colonsay almost every October and wind me up by sending phot's of themselves playing the links, which they know very well makes me jealous as hell, but seriously. i appreciate all the photo's i receive from the twosome. Two of the best guys you could ever happen to meet !!!! Thanks guys and keep it up. 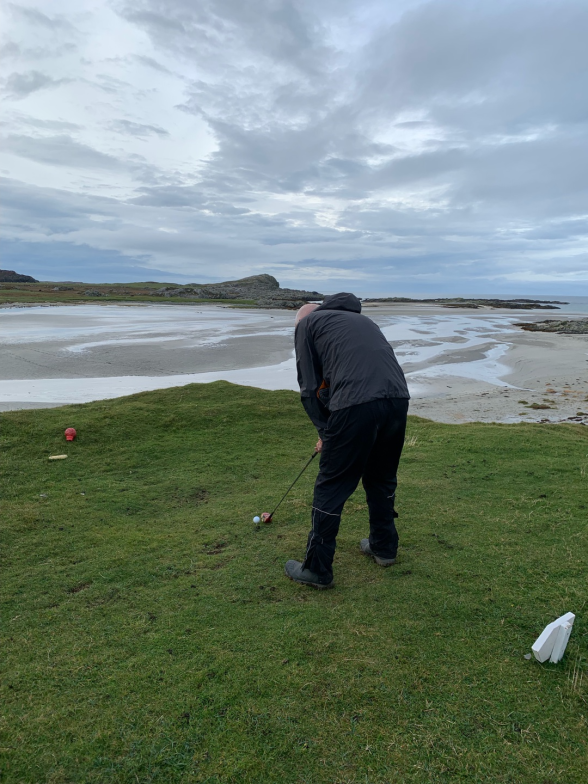 Auld father Grant ( Ian ) having a go, just had a hip op, looks like he needs another one with that stance !!!!

But what a location