Shieldhill Golf Club.  Instituted 1912. A 9-hole course at Bellsrigg Farm. The Club was associated with Shieldhill Colliery, the largest of the collieries owned by the Carron Company to service its ironworks; Craigend Colliery, which opened its course in 1924, was also in the group. 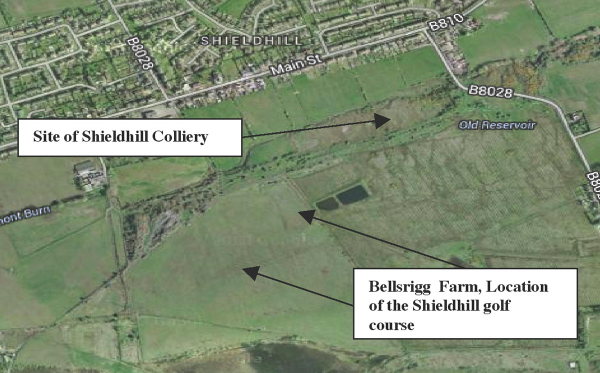 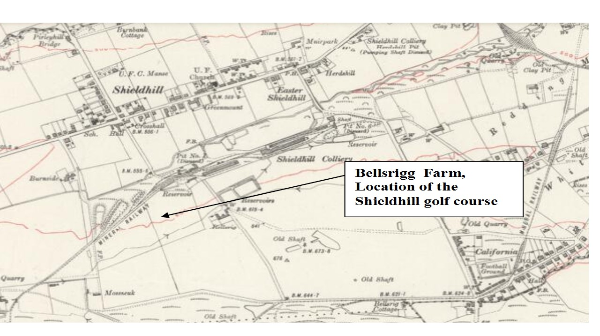 The members of the Shieldhill golf club had as their visitors last Thursday a contigent from the Polmont golf club. Rival teams being selected to the number of eight players a side a friendly game was engaged in, the home club being victorious by 5 wins against 3. A return game was fixed for tonight (Friday) to take place on the Polmont golf course. A pleasant game should be the outcome."   (FM 20.5.1914)

The members of the Shieldhill Golf club engaged in a stroke competition last Saturday, the trophy being a handsome timepiece given by Mr R. Marrs, Shieldhill, over thirty competitors taking part in the competition.

A draw being made by Messrs R. Gibb and G. Penman in the final it was agreed to play the same on Tuesday following. On Tuesday R. Gibb was successful in winning, the net scores for nine holes being – Gibb 42 ; Penman 51."   (FM 6.6.1914)

"The Bellsrig golf course, the property of the Shieldhill golf club was formally opened last Saturday. Mr Burdet, deputy chairman of Garron Co., performing the opening ceremony. A large company of golfers and their friends were gathered at hole no 1 to witness the driving off of the first ball by Mr Burdet.

Previous to the start, Mr John Brown, President of the club, made a few remarks, stating that since the foundation of the club great progress has been made in developing the course to its present perfect state, the credit of which belonged to the members who had laboured so diligently on it for nearly two years.

He also expressed the sympathy felt by the members towards Mr McLaren, chairman of Carron Co., in his present illness, which prevented him from being amongst them. He then called on Mr Burdet to open the course. Mr Burdet, after a few appropriate remarks, drove off for hole No 2, the rest of the company following in turns.

Before leaving the course, Mr Burdet was presented with a handsome Walking-Stick emblematic of a golf club suitably inscribed as a memento, and a token of esteem.

A company of fifty sat down to lunch, which was done ample justice to. Votes of thanks to Mr Burdet, Mr J. Brown, President, and Mr Robert Marshall, Captain, were heartily given"   (FM 20.6.1914).

"The annual meeting of the members of the Shieldhill and District Golf Club took place on Wednesday evening last in the clubhouse. Mr John Brown, President, presided over a good turnout.

The treasurers report and balance sheet showed a satisfactory balance with which to commence the season.

The present season ends on 30th April, and it was unanimously agreed on the motion of the chairman, that all members who have joined the colours be kept as members without paying subscriptions until the termination of the war."   (FH 27.3.1915)

As no further references hve been found, it must be assumed that the club succumbed to the constrictions of WW1.