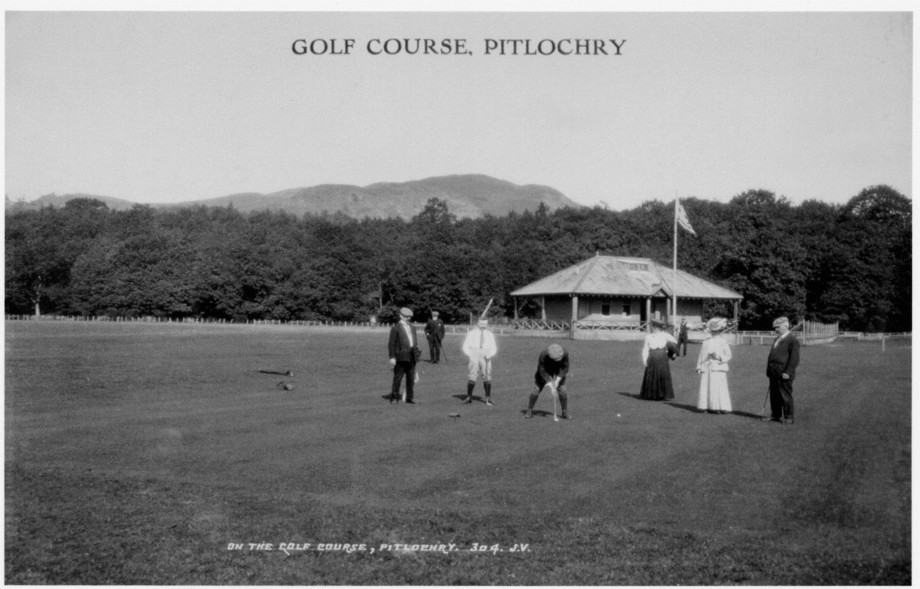 Pitlochry Golf Club -1. Instituted 1895. A 9-hole course between the station and the River Tummel, with the he clubhouse situated on the recreation ground, and the holes bordering Faskally Woods

“The club is fortunate in possessing an ideal 9 hole course, which is surrounded by pretty woods and heather clad heights. It has already been recognised by visitors as one of the chief attractions at this favourite mountain health resort” 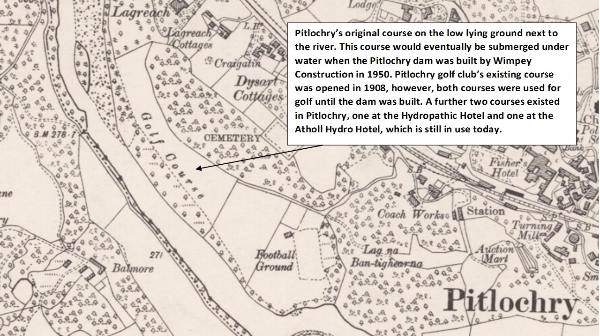 The club flourished but was considered too short and in 1904 moves were made to extend it..

“The other forenoon James Mackie of St Andrews, who was sent by Tom Morris, went over the Pitlochry course with a view to its extension and improvement. He was accompanied by Mr Hugh Mitchell, captain of the club; Mr A M Meldrum, solicitor; and other members interested. It is understood that as the result of the inspection the idea of utilising the extra ground to the north of the existing course has been departed from, and that any extension will be to the south-east by the way of Lady’s Dell. Mackie, however, will place the details before his superior, when a report on the matter will be prepared.

In the afternoon Mr A Murray, the record holder of the local club, went round the course with Mackie. Murray played a very good game, while Mackie appeared to be somewhat hampered by the strangeness of the ground. The result was a win for Murray by 77 strokes to 81”   (G)

"A sketch is herewith given of Pitlochry golf course, which has recently been extended to the East by additional ground being generously granted by the superior, Captain A.E. Butter, C.M.G. of Faskally.

Golf has made great progress in this picturesque highland village within recent years, and the last in one of several extensions of the course that have been found necessary in order to prevent overcrowding and cross play in the summer months, when the ground is largely taken advantage of by visitors and others.

The greens of the course are large and beautifully kept. The first three holes are of a fine sporting character, named, Lady’s Dell, Woodside and the Alps, and are each par play in 4s. The drive to the fourth hole – Ford – is from an altitude of 100 feet to the river bank, and should also be done in 4. The fifth is to the “ Double “ hole and is par play in 4. It affords interesting play across an artificial bunker into which the unwary golfer will land if he slices his ball. The sixth, or River hole, is along a narrow stretch on the bank of the stream, and usually takes 5 strokes, abounds in  hazards, with a high treed bank on the right hand side. The “ Lagreach.” Or seventh hole, is a short one, guarded by a bank, and demanding very straight driving to do in 4. To the eighth “ Long” hole, the ground is level, bogey score being 5. The ninth or “ Home” hole is also guarded by a double bunker on the left, and is par play in 4. Bogey score for the nine holes being 38.

Altogether the course is a most attractive one, and is sure to become increasingly popular with devotees of the Royal and Ancient game."   (EED 20.6.1906) 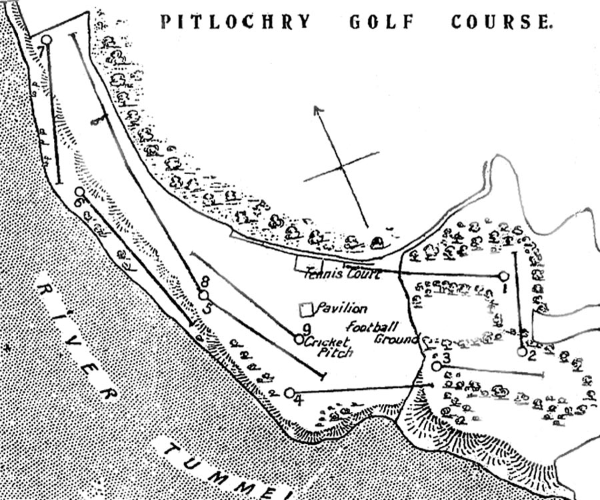 This course is now totally submerged under the water of the Faskally dam. 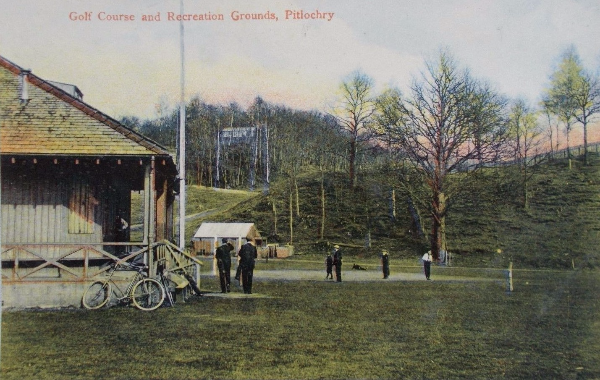 The current club opened in 1909