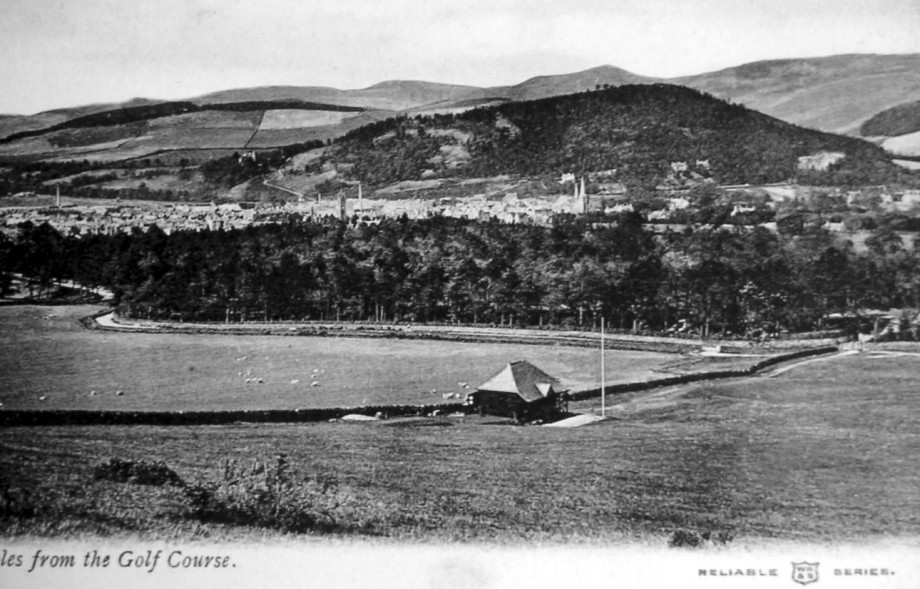 “A meeting of those persons interested in the formation of a golf club was held in the Central School on Tuesday evening. There was a fairly large and representative turnout. Mr Robb, Gala Lodge, who has taken a leading interest in the inception of the movement, was voted to the chair, and explained the object of the meeting.

It had long been felt that the want of suitable facilities for recreation among visitors was acting injuriously on the standing of Broughton as one of the minor summer resorts, house-letting being often hampered by the want of a public golf course. After some discussion, it was agreed to form a club, and a committee of Ladies and Gentlemen was nominated to make arrangements, with Mr T. Tudhope, Broughton Place, as Secretary and Treasurer. The committee thereafter met and discussed ways and means” 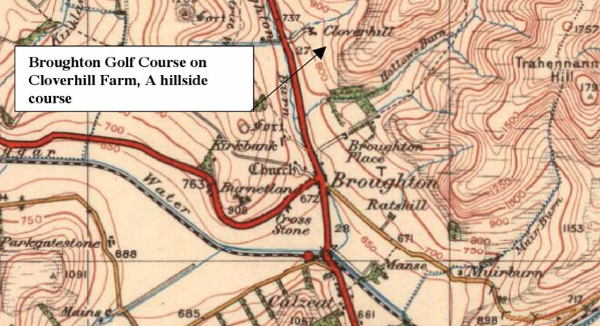 “One of the greatest changes that have taken place in the social life of this as of every other parish has been produced by the Motor Car.

When we were young, we “ Legged” it to a picnic, even on top of Broadlaw. Now, we cannot go for a round on the course of the Public-Spirited tenant of Cloverhill without motoring to the damfoot. There is a distinct golf flavour about this expression. Talking about golf, one of the social events of the season took place on Saturday in the shape of a golf match between visitors and residents. The match consisted of foursomes, and ended in favour of the residents by five matches to two. In addition to the players, a large gathering of Ladies and Gentlemen assembled to grace the proceedings. Tea was provided by Mrs Hannay and Mrs McEachin.”    (PAd 7.8.1909)

It was a glorious summer's day and I was taking the sun at the back of the house when Harry appeared about mid-day. The usual topic of conversation ensued from which was always delivered the days plan of attack ! So I searched through my notes and came across what was by now, an age old entry - BROUGHTON (?).

And so it was decided, that for this day, we would attempt to uncover the long forgotton facts of Broughton golf course. A mission which would, regretably, start from absolute scratch due to our complete lack of information.

Maime Masterton, aunt to my wife Dorothy, was an obvious initial contact being a native of Broughton with a long family line of historical association with the village and assumably knowing all the pensionable people who may have been able to help with our inquiries.

On arrival at the village, Maime kindly refreshed us with a cup of tea while pointing us in the direction of the John Buchan Centre. There we met Mr Roe, one of the volunteer  custodians of the museum, who was himself a golfer, but had never heard of a course in Broughton. After a lenghty conversation with Mr Roe we then headed for what I had thought would be a prime location for a golf course - near the old railway station and on the church glebe. The present bowling green and tennis courts being adjacent to the ground today.

As it was a Sunday afternoon, we were fortunate in coming across four of the village's senior citizens innocently enjoying a quiet game of bowls. As we leaned over the wooden fence we made our introduction. -

"No bad" said one," Whit ur ye efter the day ?" he continued warily.

On explaining our quest, which produced great interest within their group, it became more than apparent that no light would be shed on Broughton golf course from this element of the community.

We then left the "lads" with their game and as we walked away, could hear some continuing remarks of our unanswered questions.

By now, we were accustomed to stirring up the past in each Parish and leaving our interviewees to get on with it !

As the entrance to the bowling green is by way of a narrow single lane road and space in the area is somewhat restricted, we were forced into finding a turning point for the van further down the lane in the direction of the old manse. On reaching a suitable place to turn the van and head for another octogenarian contact, we were pleasantly surprised to hear a familiar voice saying -

The voice was that of a golfing friend by the name of Alistair Brownlie who had just ended his involvement with a childrens Duck Race down a stretch of the burn, (Biggar Water)

"Aw, that'll be at Cloverhill".

Well !  A stony silence was observed for a few moments while Harry and I composed ourselves. This was becoming too easy !

Cloverhill farm is situated about half a mile outside Broughton on the Edinburgh road and  miles from my guess-timated location of the course. However, Alistair directed us to the farm and told us to ask for Mary and Findlay Smith, the present proprietors and his in-laws. A grateful (and somewhat hasty) farewell was made to Alistair and we were off once again on the trail of discovery, but by this time our excitement and anticipation was at an unen­countered level of optimism. Like two wee boys who had been given a 3d Lucky Bag we drove back up the lane and stopped at the bowling green where our new found pals were still involved in their game. This time we got out of the van and strutted towards the fence with a hint of arrogance and gained their attention with a simplistic -

"AYE" - which was acknowledged fourfold by the more complex -

"Cloverhill ?" was the bemused synchronised reply.

"Aye, that's right", we replied in tandum, while turning back to continue our journey and again listening to the echo of muttering conversation amongst them. They, as well as ourselves, had learned something about Broughton village that day and to us, is a prime example of the satisfaction derived by all through a little historical research !

Mary and Findlay were soon to be our next aquaintances' and to our greatest surprise and satisfaction - they produced the photo­graphic evidence of golf being played at Cloverhill. This photo would also be the source of a "ghostly" reproduction of it's exact image.

To explain - when we arrived at Cloverhill Farm and had made our introductions, Mary responded to our enquiries by finding and showing us the (illustrated) black and white photo of the Broughton golfers'. This was indeed a major coup for our research and Harry and I took turns at admiring the exhibit while trying to extract more information at the same time. Obviously we re­quested a copy, to which Mary unhesitantly agreed and promised delivery ASAP. Having shown us the relevant fields and - Clover­hill itself - from the backyard of the farm, we gave our thanks and made for home secure in the knowledge that golf "was" played at Broughton and that a field survey would be our next require­ment.

Six days elapsed and a fine Saturday afternoon accomodated our intended field survey of Cloverhill complete with camera for our own photographic archive. We were also anticipating, ( with impa­tience) receipt of the copied photograph for reference while on the hillside. Alas, there was no one at home so we proceeded to walk the hill, taking random snaps on the way and debating the possible layout of the course and who would have played on it ? After a couple of hours we reluctantly dragged ourselves back down the hill to the farm where we met Alistair, who had just returned from his game of golf at Biggar. The ensuing conversa­tion came to an abrupt conclusion when he told us that he had left the copies of the old photo "behind the bar at the club­house" in Biggar - cheerio and thanks was to be our instant response, possibly leaving Alistair with thoughts of "Deja Vu" from the previous Sunday ?

The coveted copies were duly uplifted from the clubhouse - ad­mired and appreciated before being filed for future research. Little further thought was given to this until, about another week later, I received the developed spool back from the chem­ists. These were scrutinised in my usual critical manner with a self indulged "pat on the back" for the good ones - and a dis­gruntled "humph" at the over-exposures or whatever, that we ama­teur photographers always manage to produce in abundance.

These snaps were in turn filed for later use and I resigned myself to a fag and a cup of tea. It was at this time, for rea­sons unknown to myself, or indeed Mystic Meg, that I felt com­pelled to have another look at the snaps, but this time with the old black and white copy. I was astonished (and I don't astonish easily ?) at what I had before me - two identical images of a hillside landscape taken approximately 100 years apart and with­out honest intent on achieving such a result. One with some spirited golfers of that day - and the other, well, perhaps only their spirits guiding the unsuspecting researchers into reviving their long gone memory ? 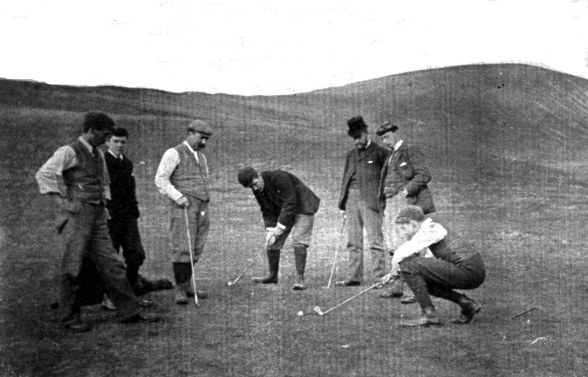 Unfortunately, no more facts nor details ever surfaced relating to the old golf course at Broughton, other than the articles at the top of the page which Harry found many years later, and therefor it retains it's secrets of long past games and matches - which we know - were played on the turf of Cloverhill and from where the golfer could take solace from any duffed shot by simply concentrating his eye upon the delightful scenery that surrounds the small village of Broughton, Peeblesshire.

Throughout the following summer months our research of old golf courses took us on many similar hikes and as a direct result of the Broughton phenomenon, we attempted to replicate some of the other archive photos' in our care. Try as we did, with deliberate and concious methods - not one photograph came even close to it's original image !