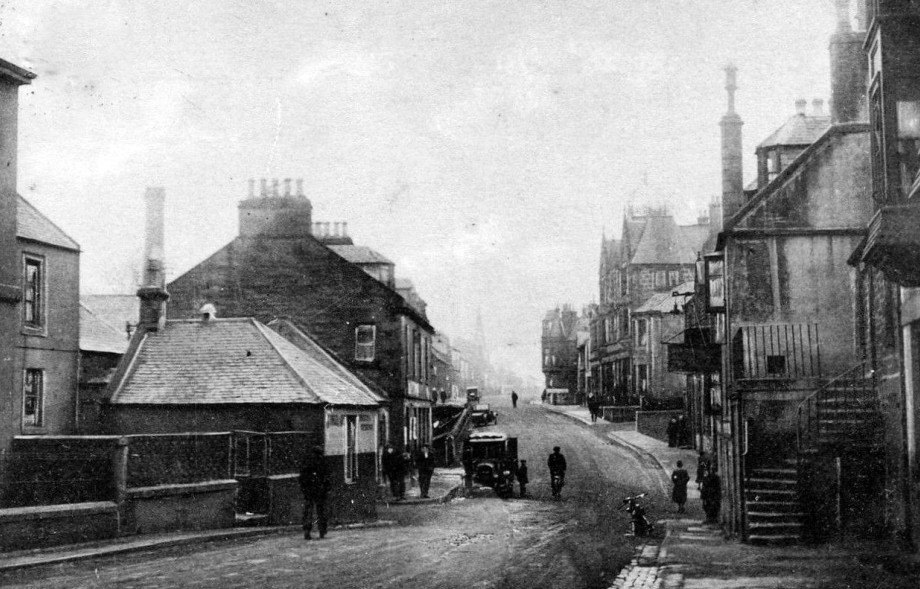 West Calder & Addiewell Golf Club.  Founded 1896.  A 9-hole course, on the farm at Burngrange, a quarter of a mile from the station.  Hazards are ditches and a cemetery wall. 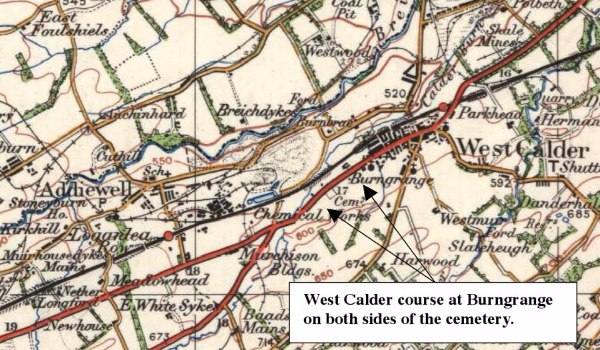 “A very representative meeting of those interested in the formation of a golf club for the district was held on Wednesday evening in the lesser hall. It was unanimously agreed to form a club, and a committee of five was appointed to look out a suitable course and submit report of same along with other necessary information at a future meeting.”   (MA 22.3.1896)

“On Friday afternoon last the West Calder and Addiewell golf course was opened by Mr John Fyfe, Managing director of Messrs Young’s Oil Coy, Ltd. The course, which is situated on the farm of Burngrange, is one of nine holes, and is conveniently situated  for the villages of West Calder and Addiewell, West Calder instrumental band was present, and there was a good attendance of ladies and gentlemen. Mr McCutchon introduced Mr Fyfe, who then struck of the first ball, and declared the course open. Thereafter Mr Rae on behalf of the members of the club, presented Mr Fyfe with a handsome silver timepiece and inkstand, and bearing an inscription. Mr Fyfe, in a few words of reply, expressed his thanks, and intimated his intention of giving a gold medal to be competed for by the members of the club.

Mr J.G. Fairley moved a vote of thanks to Mr Fyfe for his presence there that day, and expressed the indebtedness of the club to Mr Fyfe for his interest in it’s welfare, and of the liberality of the company with which he was connected, in giving them the ground free of rent.

A considerable number of players then struck off good, although the boisterous weather interfered with good play. Mr McCutchon, it is understood, is to give prizes to be competed for by the lady and gentlemen members.”

“The annual general meeting of the members of this club was held in Mr Thomson’s rooms on Monday evening. Mr J.Welsh, Captain, presiding. The minutes of last meeting were read and adopted.

The financial statement for the past years showed an income , including balance brought forward from last year of £16. 17s 4d and an expenditure of £9 7s 4d leaving a balance of£7 10s at the credit of the club. The sum of £6 10s was devoted to clearing of the balance of cost of the horse – mower, leaving £1 in hand with which to start the season. The report was considered very satisfactory, and was adopted.

It was agreed to advertise for a course – Keeper. The opening match was fixed for Thursday 19th April at 5pm, when teams representing the captain and vice captain will take part.

The annual subscription was fixed at the same rate as last year viz – 7s 6d for gentlemen, 3s for ladies, and 3s for lads under 18 years. The secretary was instructed to arrange matches with the neighbouring clubs, and the competition for the monthly medal was fixed for the 26th April. It was arranged to have the course put in order at an early date, and the committee were authorised to make enquiry about a clubhouse and report. This was all the business, and a vote of thanks to the secretary and to Mr Welsh for presiding brought the proceedings to a close.”   (WLC 14.4.1906)

“ The new golf house was formally opened  by the President.  The Clubhouse is a great improvement on the previous one, being fitted up with a ladies’ room, water, etc.  The membership is barely as large as last year, but is expected to increase.  The course is in fair order.”    (WLC 1.5.1914)

“The Golf club opened their season on Friday last, with a match a double foursome between sides representing the captain Mr S. Gilliland and the Vice-captain Mr Jas.Mungle.  There was a good turnout of members, ladies and gentlemen, and some pleasant and close play was witnessed.  The Captain’s side ultimately won by 3 games to 2 games.

A very enjoyable tea was after-wards partaken of in the club room.  It was agreed to entertain a party of wounded soldiers from Bangour on 17th May arrangements for same being left in the hands of the Committee.”

"West Calder players proved on Thursday last that their good victory at home was not due to luck or local conditions, as they travelled to Broxburn and defeated that club on their own course by four matches.  The West Calder ladies gave a very fine display, and had a good share in the victory.  The scores were as follows:-